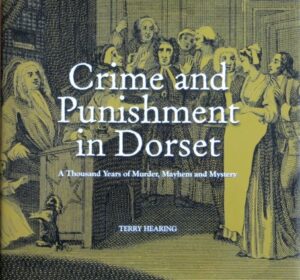 Crime and Punishment in Dorset – A Thousand Years of Murder, Mayhem and Mystery

(Terry Hearing) The story of Dorset’s criminal past begins with skulduggery in the Royal Family in the 10th century, and progresses through much human folly to treason and murder in the 20th century.

Curiously, domestic violence was often not regarded as criminal, unless it turned into murder, whereas theft of even minor property was subject to savage penalties.  Dorchester prison was originally simply a holding pen for prisoners before trial, but for the last 200 years it developed into a place where substantial attempts were made for reform and rehabilitation.