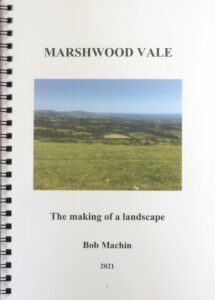 Marshwood Vale – The Making of a Landscape

(Bob Machin)  This book describes the history of the vale from early times up to more modern times.

The vale was an uncultivated waste until the late Saxon period.  By 1086 only twelve small areas had been enclosed.  Many new farms were established in the 13th century, but the waste was not finally cleared until the late 16th century.  Initially the waste was cleared by many pioneers who each enclosed one or two acres.  These smallholdings were gradually amalgamated into ever-larger farms, so the characteristic isolated farms of the vale are a comparatively late feature.