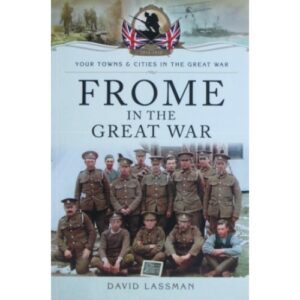 Frome in the Great War

(David Lassman)  Men from Frome and the surrounding area experienced action in all the theatres of war that the global conflict encompassed, and they took part in the numerous battles and campaigns, on land and sea, that have become synonymous with that conflict – Ypres, Gallipoli, Jutland and the Somme.

Frome’s civilian population received a special commendation after the war for its effort throughout it.

Using letters, diaries, photographs, newspaper reports and eyewitness accounts the author has assembled the story of the town during the Great War.