A Day Out at the Seaside 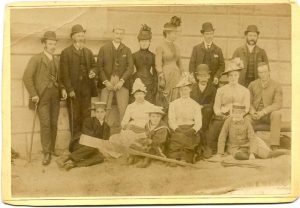 Following on from an earlier blog about unidentified photographs I can share the story of this lovely family group. The photograph was taken in Boscombe on 17 September 1889.

Some years ago I inherited a box of old family photographs that had belonged to my great-grandmother Alice Mary SCARD, she married (in 1894) George John PITFIELD, this photo was amongst them. Needless to say none was identified – so frustrating! I tried for years to try to find out who the people in the photos were, I had no success. With this one as I could see by comparing it with other, identified photographs in the family, that the lady on the far right was Alice – so I had a start. Alice, came from a large family (nine siblings) that had farmed in Cerne Abbas for generations, it was therefore reasonable to assume that this was a family group on a day out at the seaside.

Given the recent lockdown, I used my enforced isolation to sort out the box of photos and to capture digital images which I posted in the S&DFHS Group on Facebook, I did this in batches of 10. I was amazed at the result. Other members said they have found them interesting for their own sake. Others were interested in the photographers. One kind member colourised some of the for me. Others interested in military history and uniforms suggested who soldiers might be. I’m especially grateful to those who have helped identify a few of those depicted.

My final challenge to the group was what to do with these Victorian, mostly, ‘carte de visite’ photos. My heirs are unlikely to value them. I don’t want them to be thrown away. I know they sell on eBay for about £3.00-£5.00 but that doesn’t appeal as a solution. Again many kind members came forward with ideas. The best of these was that I donate them to the S&DFHS Photographs Project, so this is what I will do. I have been in touch with the Society’s Head of the Photograph Project and arrangements are in place for once we are ‘liberated.’ These images will be preserved, digitised and made available to all – and for posterity.

This experience clearly demonstrates the cooperative friendliness of Society members and the power of the internet.

Going back to the ‘Boscombe Group’ by comparing images and help from other members I can now say that the lady to Alice’s right is her elder sister Kate Furber Scard. She married (in 1890) William John SHERRY, also of Cerne Abbas. It’s reasonable to suppose that he is in the photo too. There’s an image of him from Canada that suggests he could be the man in the cap, third from the left. The couple later emigrated to Canada and amongst the photos are others of them sent from there.

So, I am making some progress with this research, but if other readers are connected with the SCARD or PITFIELD families, or indeed recognise anyone else in the photo, I would love to hear from you.