A Ghost in the Family 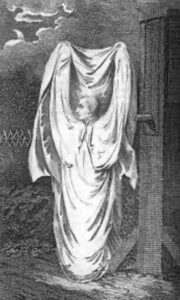 To discover that you may be descended from a lecherous murdering ghost is a startling experience and an indication that tracing your ancestry may not lead only to hidden fortunes and extinct peerages!

The PITFIELDS are an old Dorset family – there is at least one reference to a ‘Pytfold’ in the Domesday book – which seems to have originated in the Allington area of the county and gradually spread out. The first reference to my ancestor Sebastian Pitfield (1625 – 1685) occurs in the unique Minute Books of the Dorset Standing Committee. Standing Committees were set up by Parliament at the time of the Civil War to administer the counties on its behalf. The Minute Books of the Dorset Committee is the only such record that has survived and is a useful source for Society members.

It shows that between 1644 and 1649 Sebastian Pitfield served in the Parliamentary Army as a Quartermaster to a troop of horse under the command of Colonel Robert BUTLER, Governor of Wareham and gives other details of his military service. It is highly likely he participated in the final siege of Corfe Castle in 1645/6.

Sebastian was present in Oxford in May 1649 at the time when Oliver Cromwell and Thomas Fairfax were in the city. In somewhat bizarre circumstances the two Parliamentary leaders were awarded honorary doctorates by the university authorities. Lesser officers also benefited from this generosity and as a special favour to Cromwell and Fairfax Sebastian was granted a BA degree by Wadham College. Oxford had been the Royalist capital so no doubt the University was anxious to find favour with the new republican regime.

Later, in 1649 Sebastian was ordained by the Eighth Classical Presbytry of London and was assigned by the Standing Committee of Dorset to the sequestered parish of Caundle Bishop as an ‘intruder vicar’. He subsequently settled down to make a career as a clergyman and in April 1654 became rector of Winfrith Newburgh and West Lulworth. His presentation document still exists in Lambeth Palace Library and states that Sebastian Pitfield was ‘presented under the patronage of His Highness Oliver, Lord Protector of the Commonwealth’. He kept his position at the restoration of the monarchy and in 1671 was instituted as Rector of Warblington, Hampshire where he married, had children and remained until his death in 1685.

Approximately 10 years after Sebastian‘s death a curious story emerged relating to the haunting of Warblington parsonage. The ghost story is a classic of its type and has often been referred to by writers on the supernatural, in one such publication it is described in great detail.*

The deceased Rector had had an illicit affair with his maid which had resulted in the birth of an unspecified number of illegitimate children whom he subsequently murdered!

The ghost story received significant currency, not least locally, and gave rise to further gossip to the effect that the deceased Rector had had an illicit affair with his maid which had resulted in the birth of an unspecified number of illegitimate children whom he subsequently murdered! While the initial ghost story* doesn’t state explicitly that the apparition referred to was Sebastian, as is often the case, local gossip and guesswork seem to have become mixed up. Before too long the accepted version of the circumstances was that the ghost definitely was that of Sebastian who had indeed been a libertine and a murderer, and later writers name him.**

Why though would gossip suddenly emerge to stain in the character of a clergyman who according to other records seems to have been a conscientious parson. The most likely explanation seems to relate to the changing political and religious circumstances of the 17th century especially when considered in the context of Sebastian’s active involvement in the Civil War on the Parliamentary side and his closeness to the leaders of the Commonwealth in Dorset. Such a background could well have taken some living down after the restoration of the monarchy.

There is however another and in my view more plausible explanation relating to the location of Warblington church and parsonage. They are situated in an very isolated position on the south coast facing Hayling Island at the junction of the inlets that form Langstone and Chichester Harbours. This was an ideally remote place that was favoured by smugglers, the ghost story of a Dorset rebel who became a priest could well have been spread to deter the curious from venturing too near – especially at night when much smuggling would have taken place.

The answer to Joe’s question is that each county did indeed have its Standing Committee but the Dorset one is the only one in the country for which the Minute Books survive. We are very fortunate to have it.
Michael Pitfield.