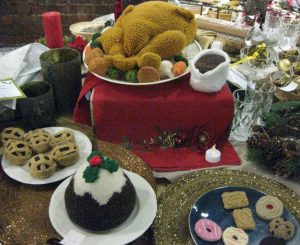 Now what do you think of this magnificent Christmas spread found amongst the festive displays at the local garden centre here in Sherborne? While all the smaller kids, having first fought their way through rows of ‘fur’ coats – the Lion the Witch and the Wardrobe style – were viewing the little festive trains chugging around a snowy Christmas village, some of us bigger kids were enjoying the skill and ingenuity that went into this ‘knit your own Christmas Dinner’. I laughed as two 30+ year old chaps were handing perfectly executed custard creams and jammy dodgers to each other. It was complete right down to the knitted gravy in the knitted gravy boat.

We are spoiled for choice here when it comes to selecting the best mince pies but my money is on those made by fourth generation baker Marcus Fudge. Marcus’s great grandfather Thomas Fudge first bought the now 100 year old machine being used here in the photo. The mince pies are made from a secret recipe that has been handed down the generations from father to son. They have a crumbly topping and are finished with a lemon glaze – sheer perfection!

Now to my own little knotty problem this Christmas – there always has to be one doesn’t there? Here is an empty bottle of glycerine that I have used one teaspoonful at a time for the past 25 years to add to the Royal icing that goes on top of my Christmas cake. I inherited this bottle half full from my mother and she would have used the first half of the bottle one teaspoonful at a time too. I cannot believe that this means between us it has taken us around 50 years to empty the bottle! I jokingly thought of taking it back to Boots the Chemist and asking for a refill as I remember well when they used to do that sort of thing. As Mary Berry uses it in her Royal icing recipe it must still be available and I will have to go on the hunt. Success! Glycerine now comes in a handy tube and I now have enough for at least ten year’s worth of Christmas cakes.

… and, as a contrast, here is a look back at the exotic plants that grew around the town in Yeovil during this past summer. ‘Yeovil in Bloom’ struck gold once again in the Royal Horticultural Society (RHS) South West in Bloom competition.

All of us here at Broadway House send you season’s greetings for a Very Happy Christmas and Peaceful New Year.