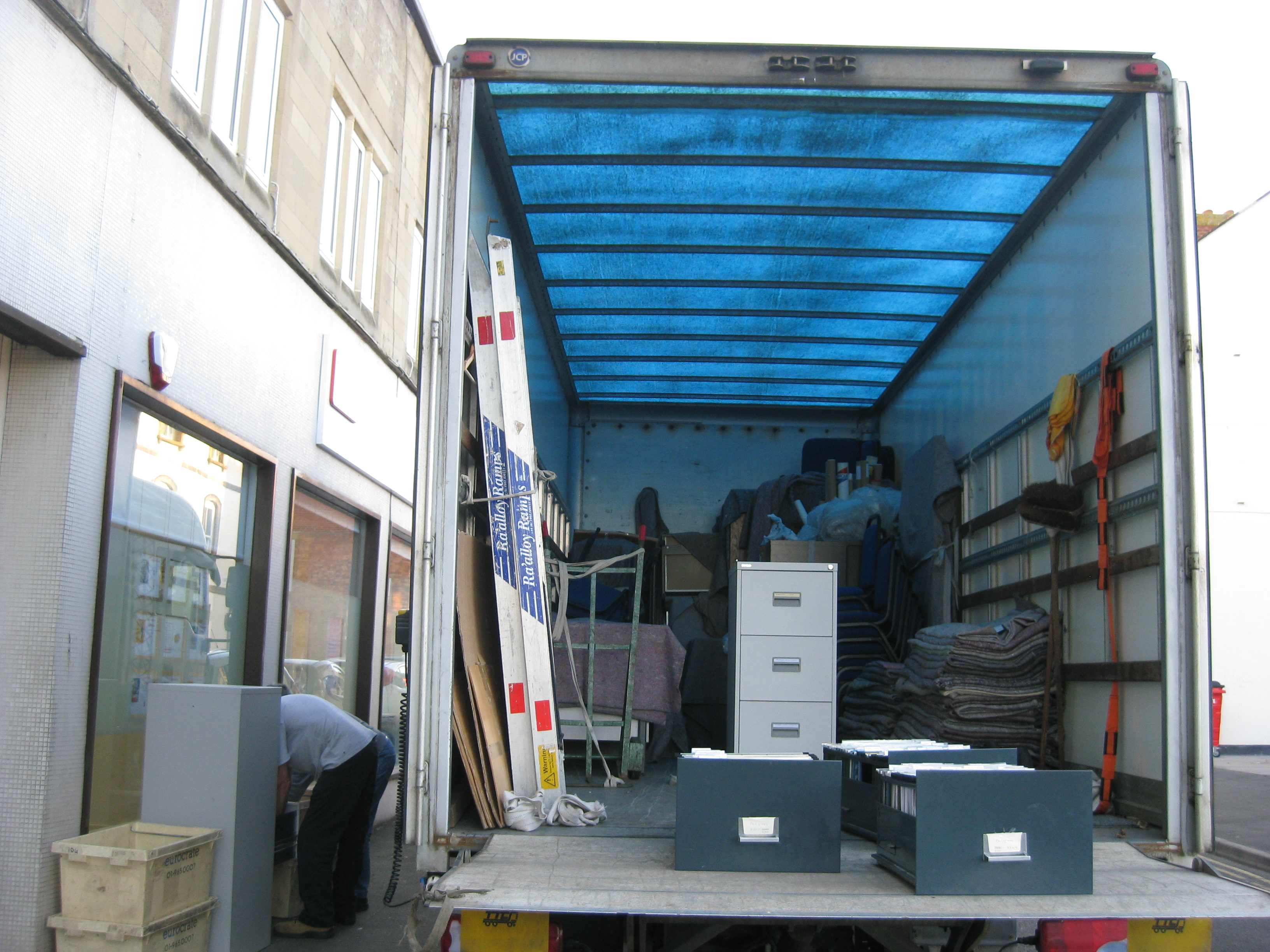 One of the removal vans unloading at Broadway House on 1 December 2017.

As we return to ‘business as usual’ in our brand new, to us, Broadway House Family History Centre in Yeovil, we would like to mark the occasion with a piece on some aspects of the history of the street on which Broadway House is situated. This has been brought to us by Bob Osborn, the instigator and sole contributor to the remarkable website An A-Z of Yeovil’s History. We would like to thank Bob for his timely contribution and for permission to include a selection of photographs.

The draper and mercer Peter Daniell of Penn Hill owned a mansion in Middle Street that had been built by his father. This mansion stood where the rear of the WH Smith building bordering Wine Street stands today. He also owned a tract of land between Middle Street and South Street and much of the land on the east side of Grope Lane, today’s Wine Street. Until the 1830s, Grope Lane was the only direct access wide enough to allow a cart to travel from High Street, the Borough and Middle Street to South Street.

In the late 1820s or early 1830s, Peter Daniell planned and built an extension to Grope Lane which became Union Street. The entrance to Union Street from Middle Street was originally very much narrower than today’s road width. The lower part of Grope Lane, called Wine Street from the 1840s, remained named as such until at least the late 1870s before becoming the southern half of Union Street.

Daniell built Bond Street to connect Middle Street with South Street, possibly as early as 1824 when, in its edition of 11 October, the Western Flying Post reported that a workman “was buried by a fall of masonry in New Street, Yeovil”.

Finally, Peter Daniell constructed Peter Street, named after himself, to join Bond Street with Grope Lane/Union Street. The initials ‘PL PD’ and the date 1836 were formerly on one of the original houses in the street and the Town Commissioners’ Minutes of 1835 refer to the “new street called Peter Street”. However, an indenture dated 7 November 1836, now in the Taunton Heritage Centre, refers to “Saint Peter’s Street, leading from Wine Street to Bond Street” although other documents of the time referred only to Peter Street, so this is probably a mistake.

The 1842 Tithe Map and the 1846 Tithe Apportionment show that the terrace of houses on the northern side of Peter Street had been built by this time. These houses were owned by the wealthy glove manufacturer Thomas Dampier (after whom Dampier Street is named) and the tenant was the equally-affluent glove manufacturer William Bide Jnr (later Mayor of Yeovil), who almost certainly sub-let the houses to his workers. The two three-storey buildings that survive on the northeast corner of Peter Street and Union Street were built around 1880 (they don’t appear on maps until after 1900, but are shown on a photograph of 1881).

In the 1840s there was a building on the southeast corner of Union Street and Peter Street although this would have fronted onto Union Street. This building was replaced by a much larger building during the 1850s. This new building, with a crenellated parapet, projected into Union Street, significantly reducing the width of the road. Its garden ran along Peter Street and, with outbuildings, stretched as far as Trinity House. It was the home of ironmonger and Mayor of Yeovil, Henry Stiby who, together with his mother, lived there for more than twenty years before moving to The Park. By 1927 the large building had been demolished and the site cleared. The site remained clear until after the Second World War when the present run of buildings from Union Street to Trinity House was built. 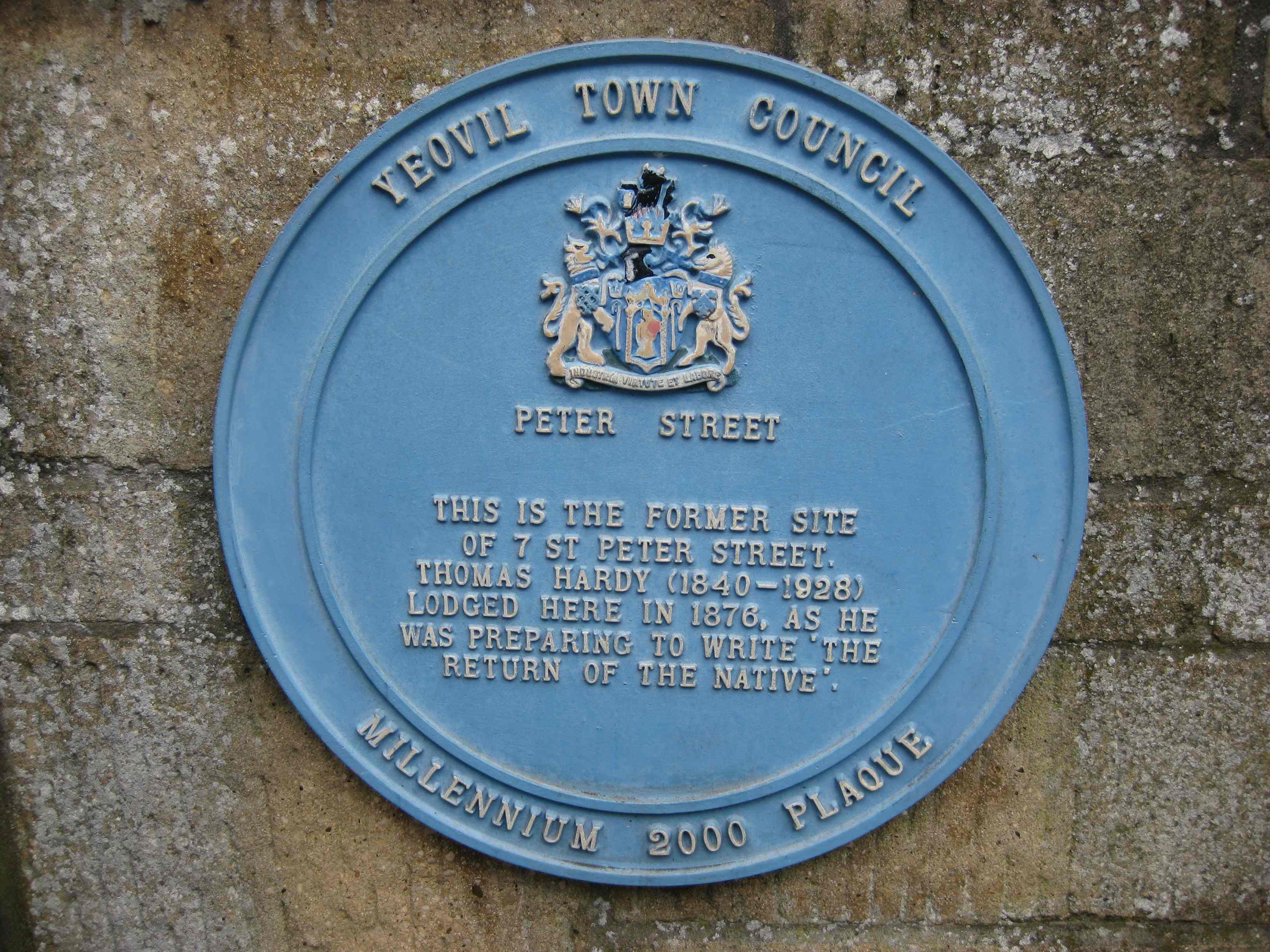 The Peter Street Millennium Plaque is set, somewhat ignominiously, very low down on a dwarf wall by the car park exit and commemorates Thomas Hardy who stayed in 7 Peter Street between March and May 1876 as he was preparing to write ‘The Return of the Native’. The northern terrace was demolished in the 1970s and the site is now a car park.

At the eastern end of Peter Street, on the south side and next to Trinity House, is the Church of the Holy Trinity erected by Benjamin Ferrey, the diocesan architect, in 1846. Congregations declined and in the 1980s plans were set in place to relocate the church to Lysander Road. The new church was completed in 1998. The original church, once declared redundant, was converted by Knightstone Housing Association to Yeovil Trinity Foyer in 1996 to provide accommodation and training to young people aged between 16 and 24 years old. This facility has recently closed. 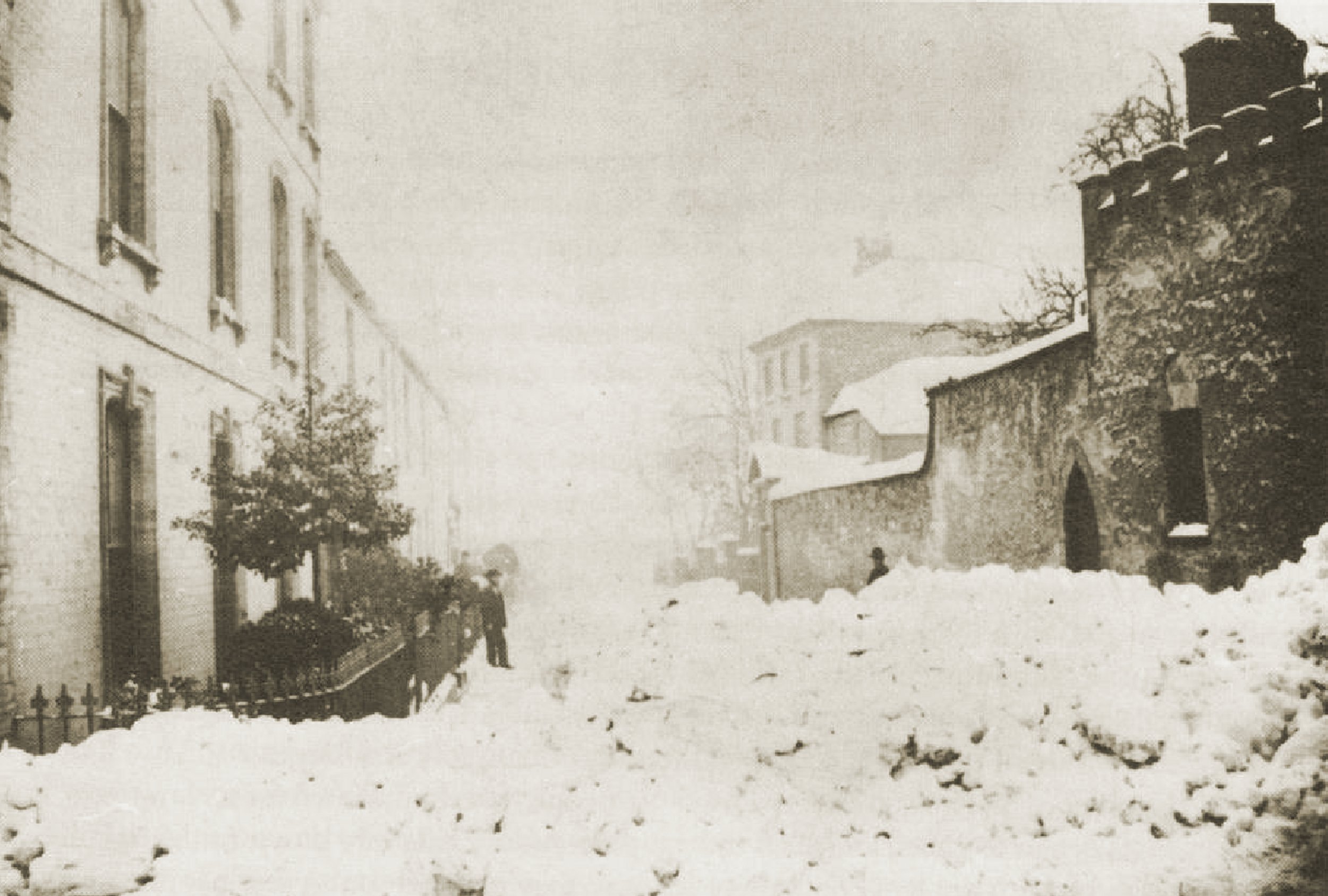 This photograph shows Peter Street seen from Union Street during the ‘Great Snow’ of 1881. At left are the two surviving houses on the north side of Peter Street. At right is the house of Henry Stiby with its crenellated parapet. Stiby, a keen amateur photographer, almost certainly took this photograph. 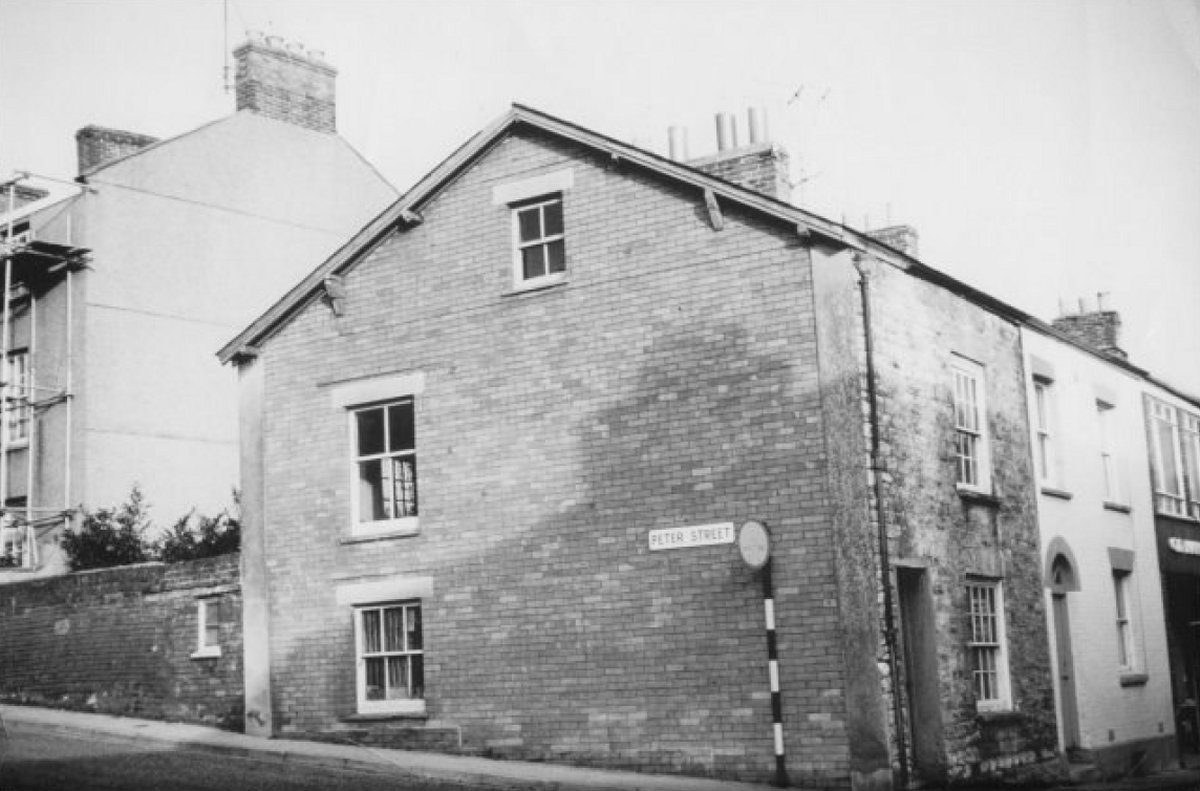 Photographed in 1968, Peter Street runs off to the left and Bond Street to the right. The corner house is now the shop ‘Sports of Bond Street’ 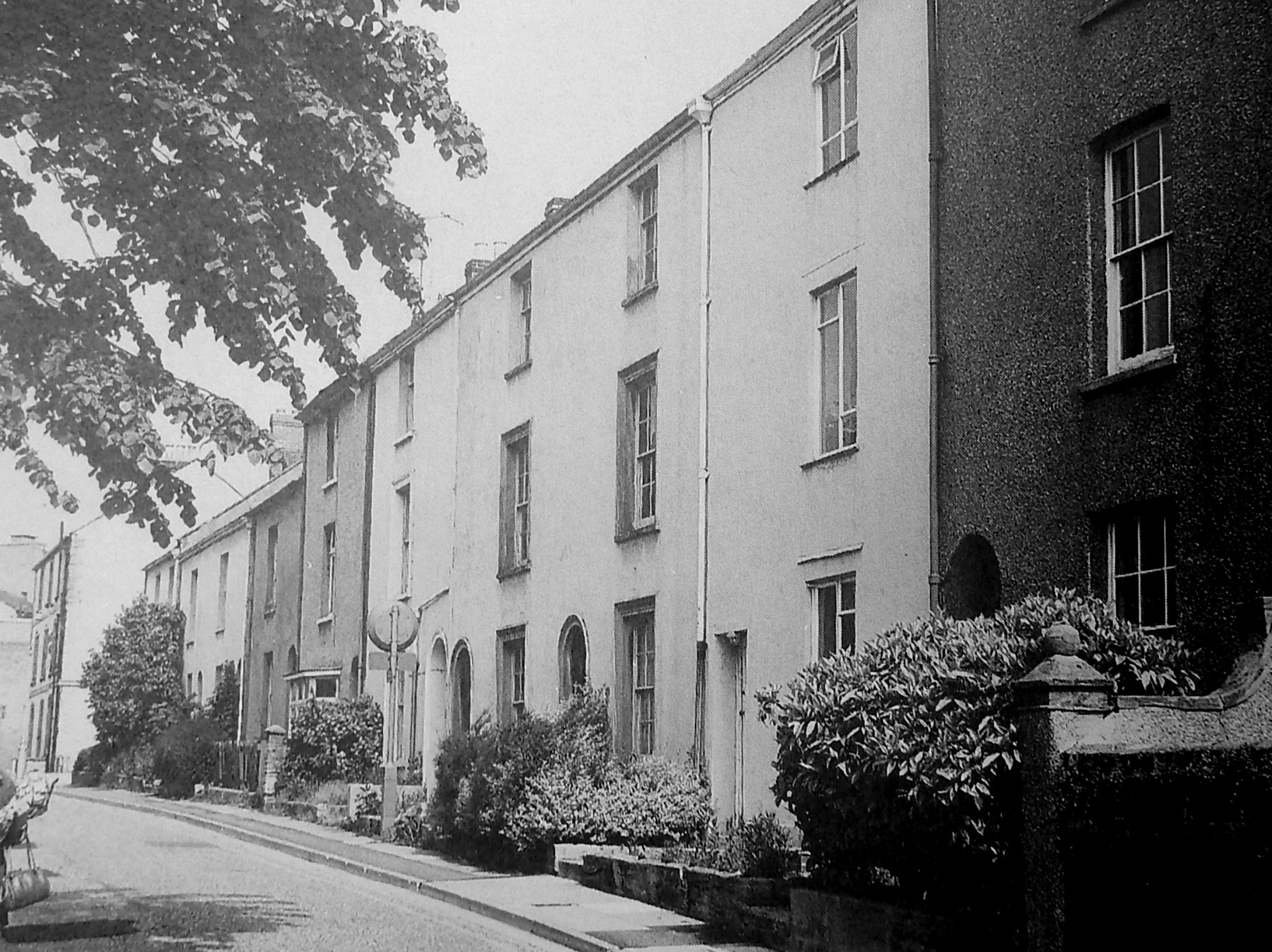 The north side of Peter Street photographed in 1968. All these houses except that at extreme left were demolished and the area is now a car park 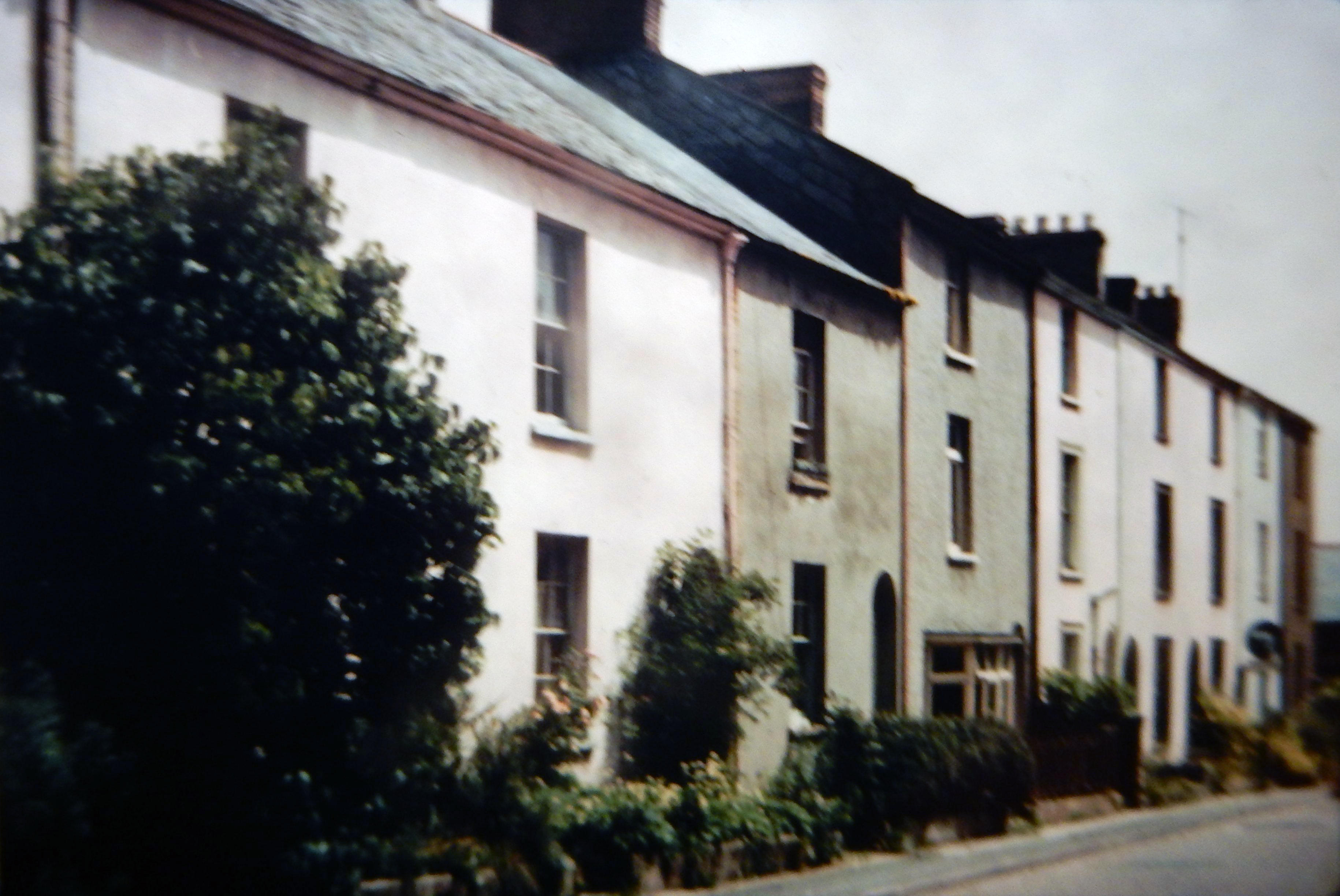 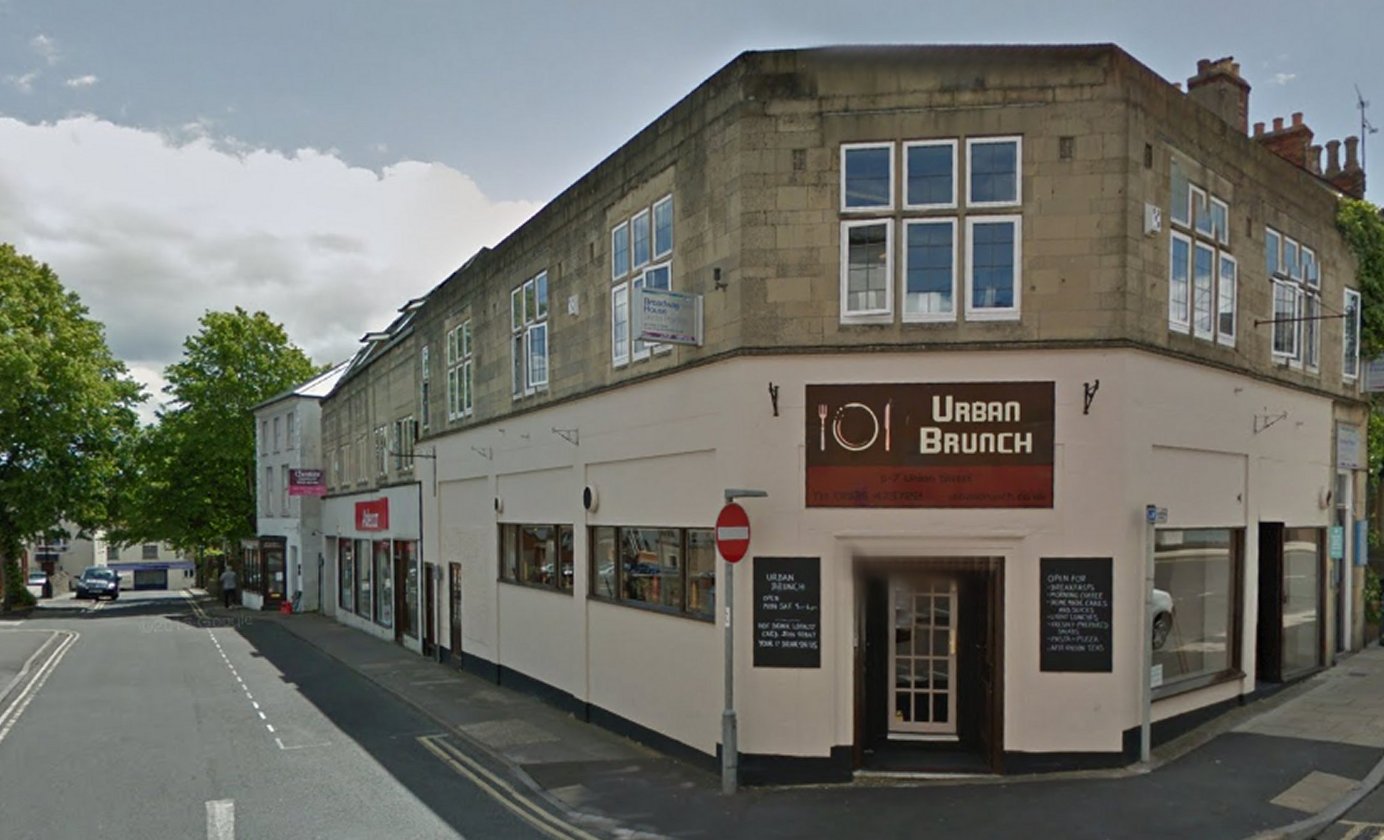 Peter Street is seen from Union Street in 2015. The main building of this photograph, built after the Second World War, was constructed on the site of the crenellated building in the first photograph above. Broadway House, the Society’s new home, is marked, on this photograph, by the estate agent’s letting board!