Do you have a carpenter in the family?

Barbara Elsmore describes how learning a new trade enabled her great-grandfather, George Collings, to improve his own life and that of his descendants. Many of his carpentry tools are still in the family and some are now on display in the SDFHS Family History Centre in Sherborne.

In 1862 fourteen year old George Collings signed an apprenticeship form and for the next four years he would learn how to become a carpenter. How could he possibly have known how this would change his life from that of his father, and his grandfather before him, and how it would change the lives of those yet to come? George’s father, Solomon, was a dairyman who had lived and worked in many villages across Somerset and Dorset as he sought work and accommodation for his family. But from the moment George put his signature on that ancient document his life took on a settled and steady pattern of improvement and the key to it all was the skills that he would learn from his new employer Henry Hull, carpenter, wheelwright and builder of Nether Compton. 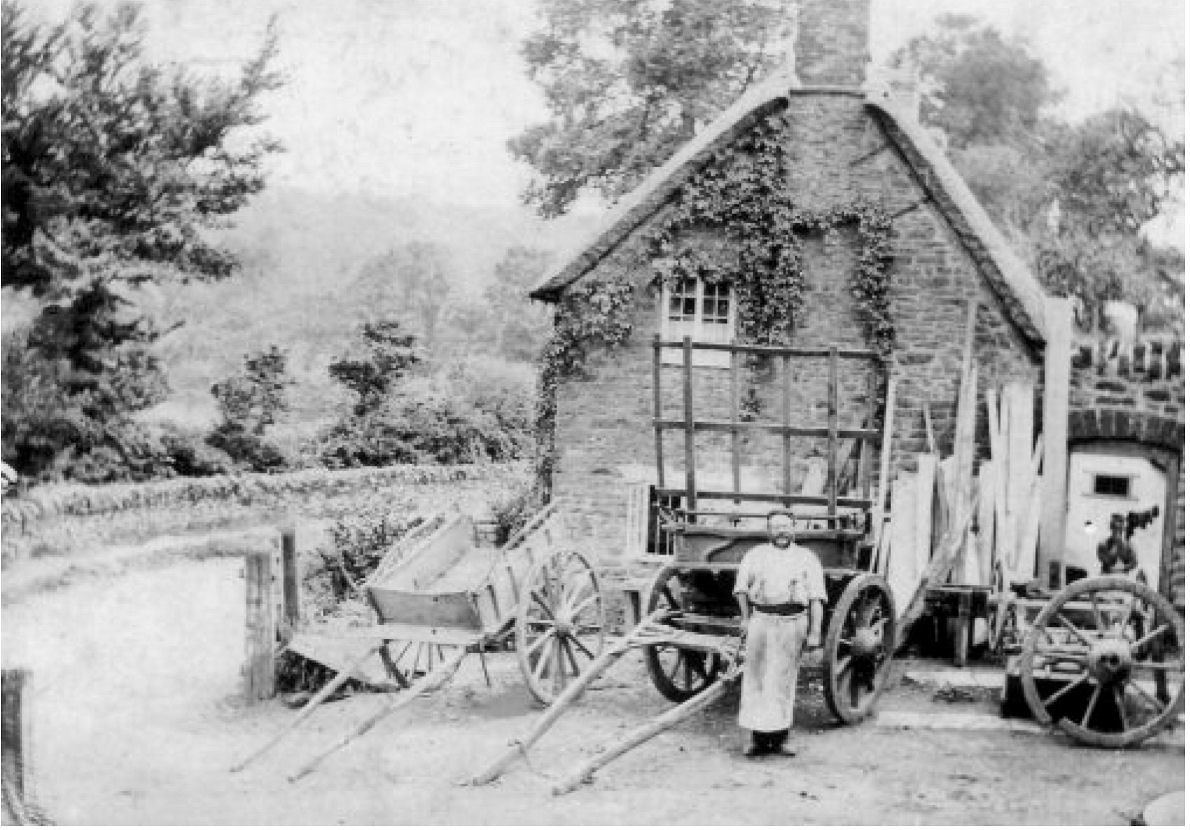 George Collings outside the Forge in Nether Compton. Photograph courtesy of Cath Adam.

Over the next twenty or so years George would marry and he and Fanny would have seven children the last of whom was born in a cottage in Nether Compton that George had renovated and rebuilt as during this intervening time Henry Hull, his old employer, had retired and George had taken his place. 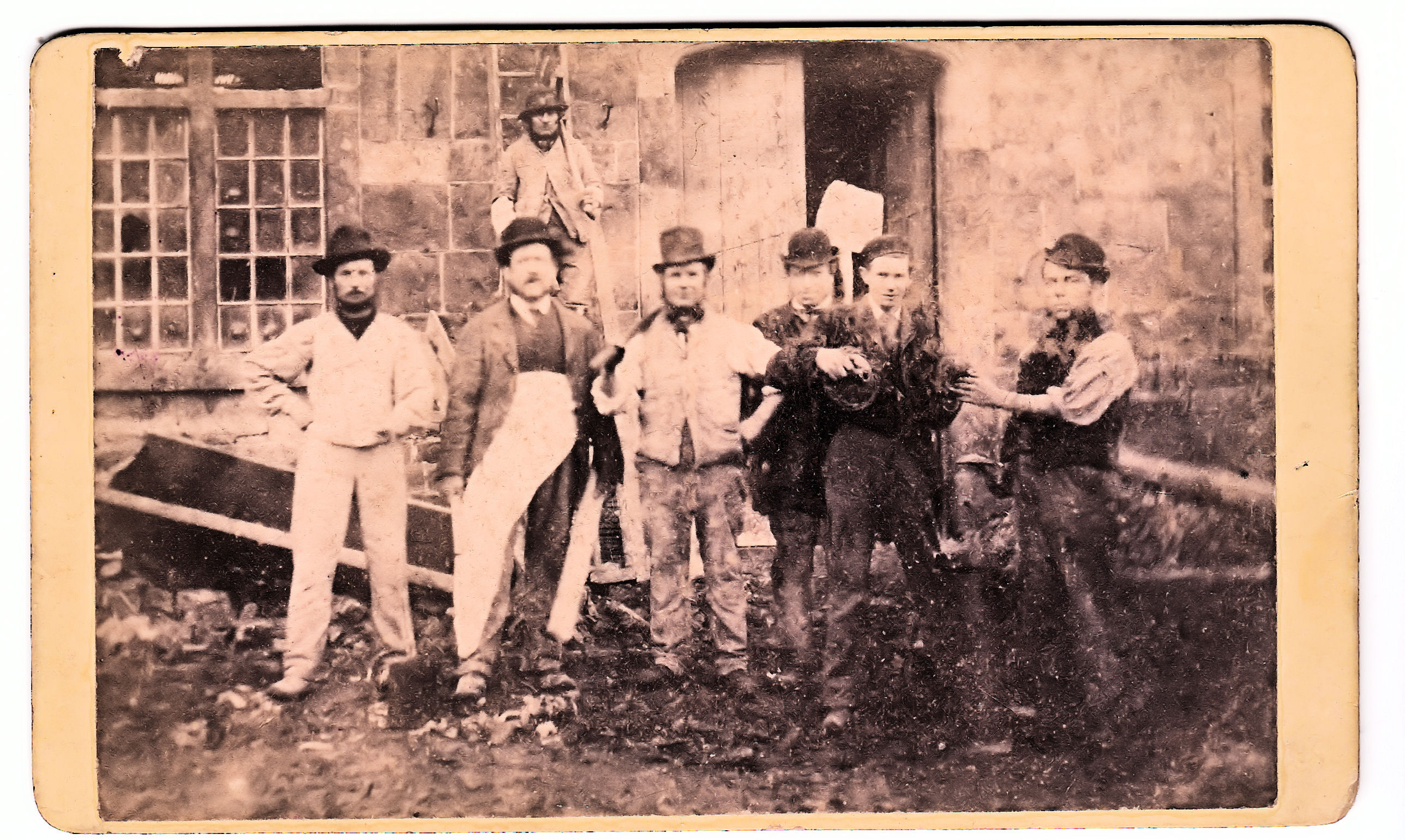 George is standing second to left, with his apron swept to one side.

There were many other craftsmen living and working in the village with around forty local men all employed on the renovating of the old cottages and farms together with building some splendid new additions to the village. There were other carpenters, masons, building labourers, blacksmiths and whitesmiths all working for Colonel Goodden, who lived in Compton House. George was the co-ordinator of the workforce and advertisements would regularly appear in the Western Gazette as he sought to hire carpenters and masons to enable Colonel Goodden’s vision for a better living environment for all his tenants to be achieved. 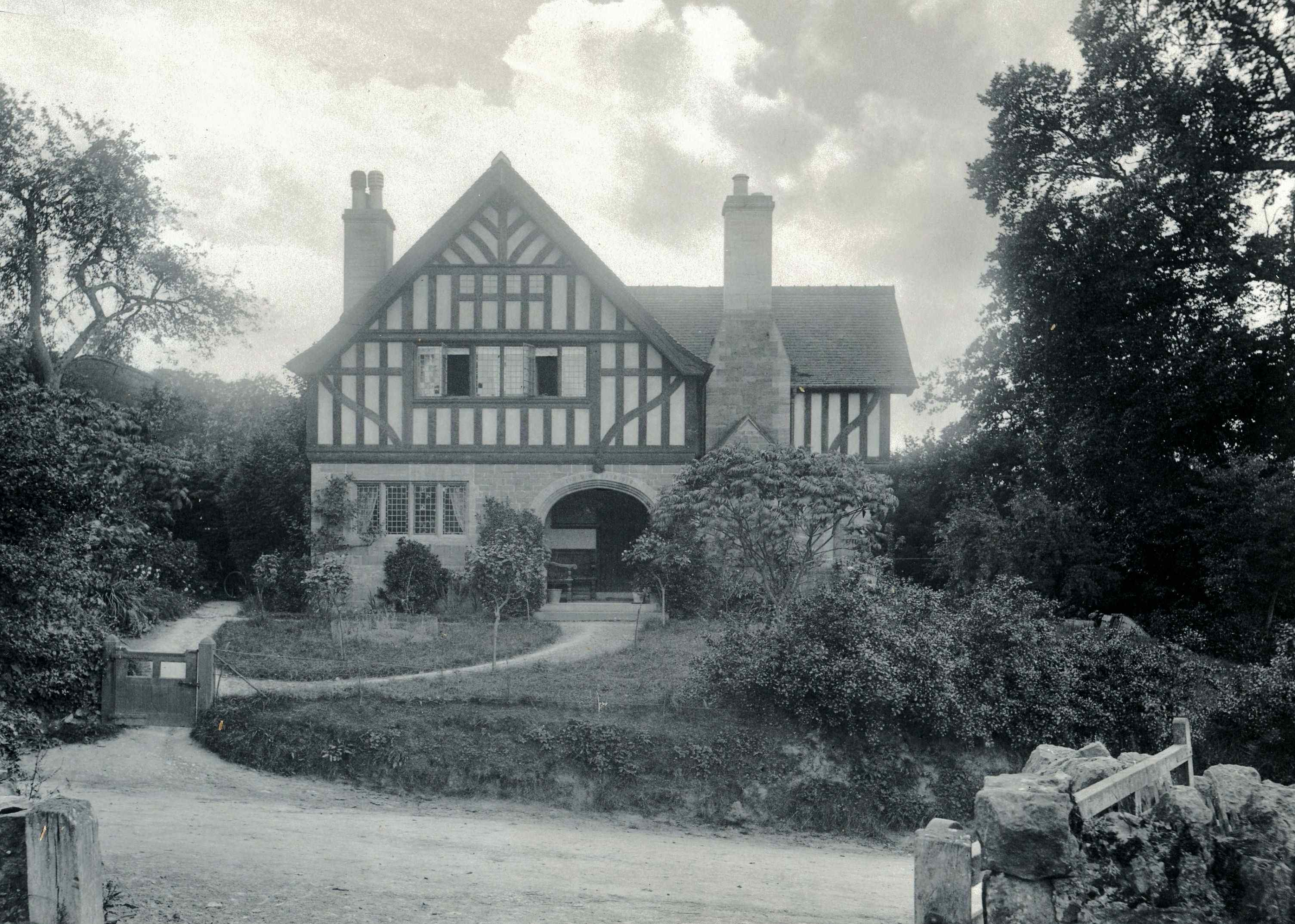 One of the new houses, completed in 1890, was Sheriff’s Lodge, so named to mark the year Colonel Goodden was High Sheriff of Dorset. I am lucky enough to have the architects’ plans for this house as they remained rolled up in a cupboard in my family home long after the house was built. During this time George also became the sub-postmaster and his wife and daughters ran the post office while his two eldest sons trained and worked as carpenters. 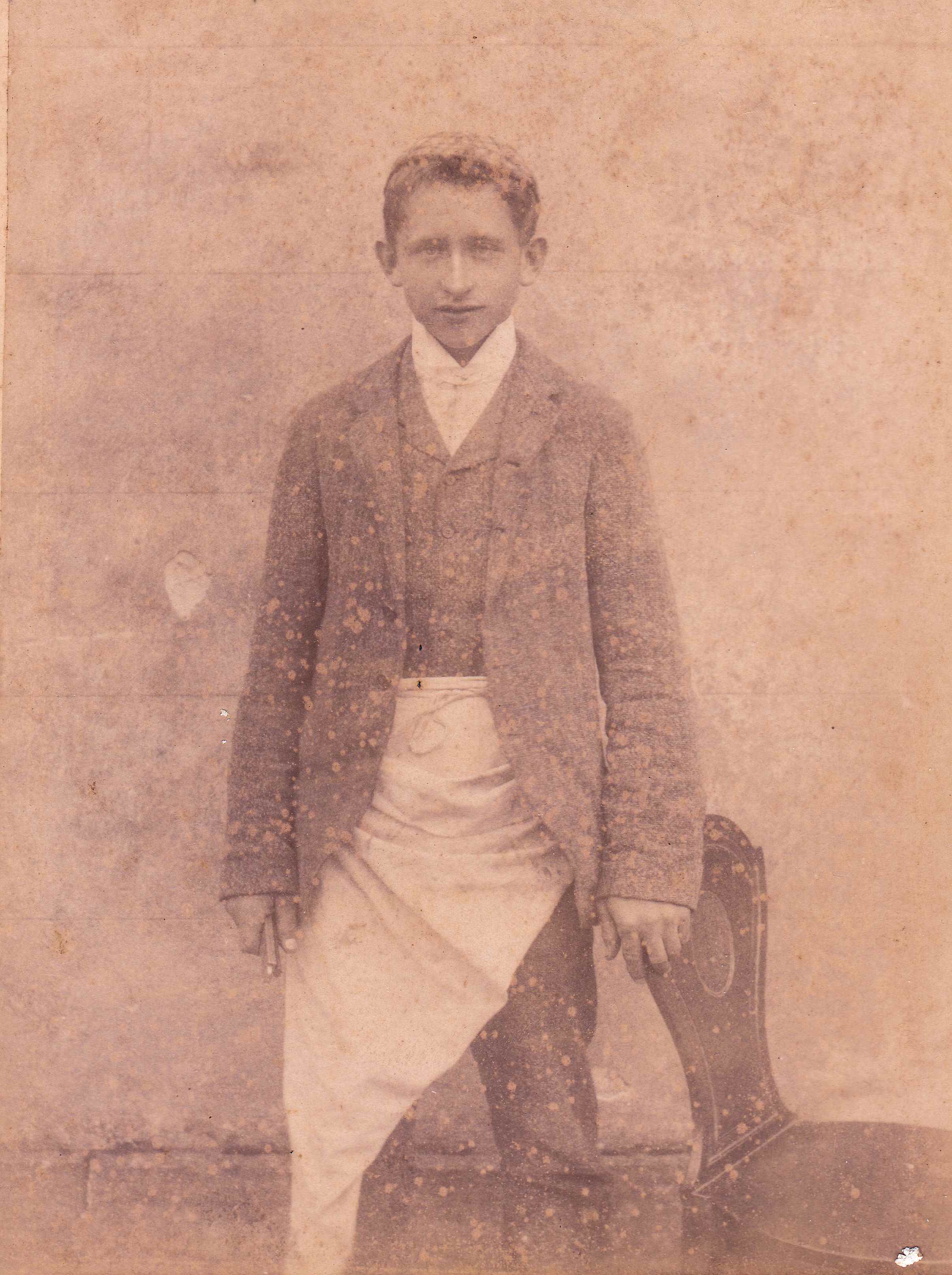 George signed up his youngest son, Arthur, to attend Foster’s School in Sherborne when the headmaster, Mr Irwin, visited the village and recruited boys to the school. I believe that this was as a direct result of George’s increased prosperity. So instead of leaving school at fourteen or even earlier Arthur received two years of secondary education which would have cost his father the not inconsiderable sum of £2 for each term making £12 the grand total for the two years. Arthur was my grandfather and I have a little shelf made by him in 1897 in the woodworking class at Foster’s School. 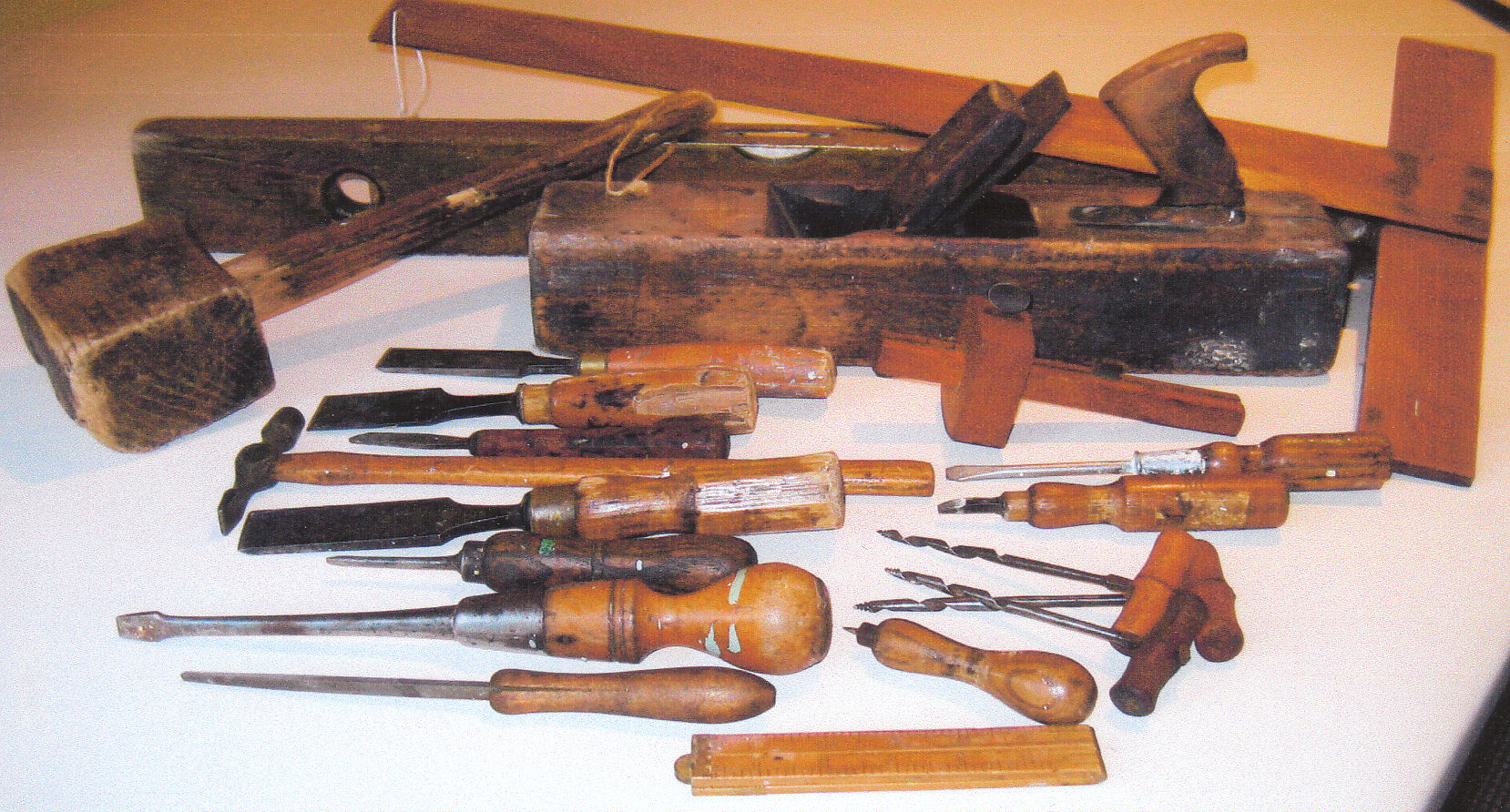 Now we fast forward and I am the custodian of some of the surviving tools that have passed literally through the hands of George to Arthur, then to my father, Ralph, and now to me. Can you imagine what a thrill it gives me to hold one of these tools in my hand knowing just who would have held them in the past? 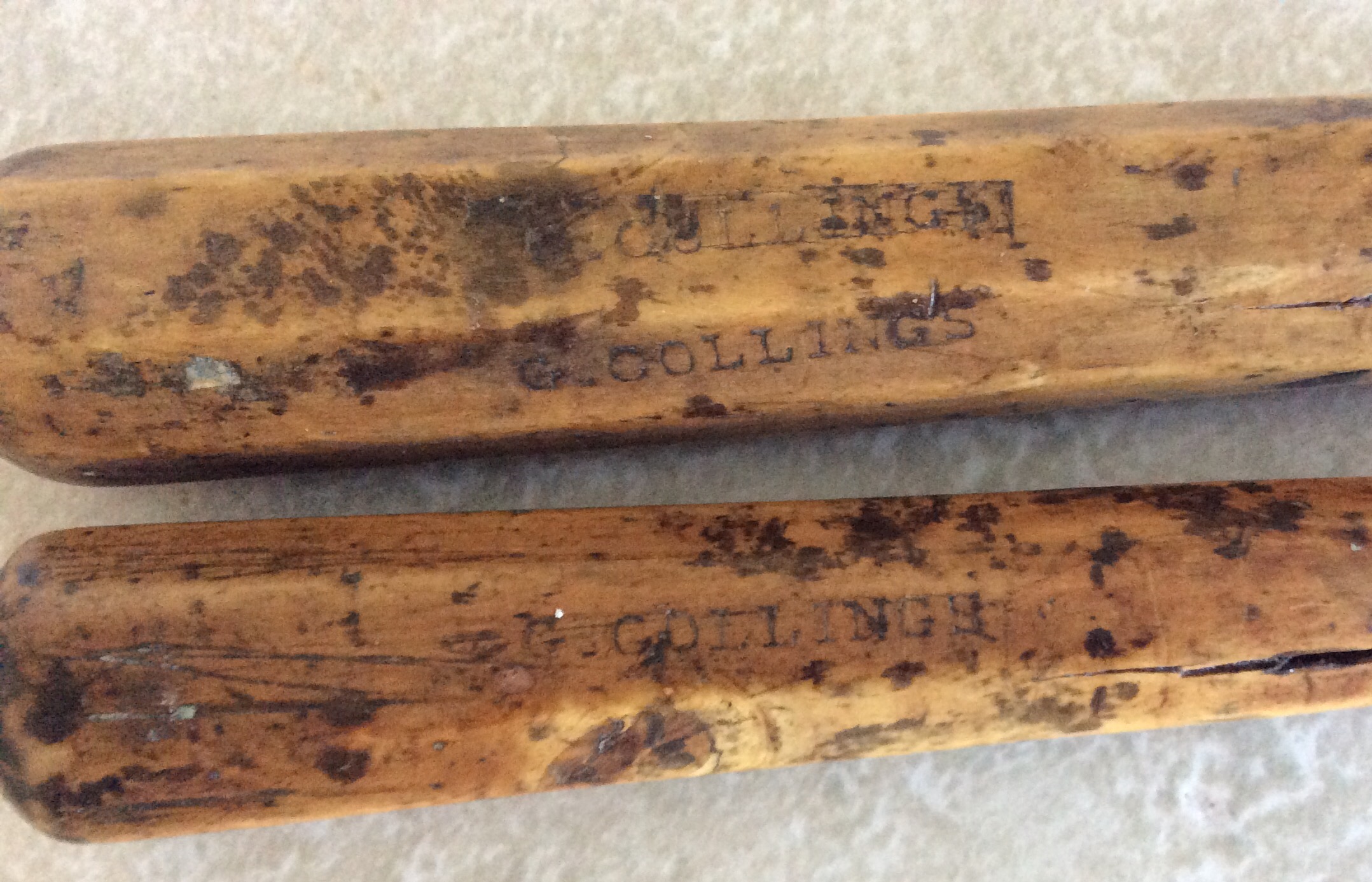 I have discovered George’s name on a couple of the handles, possibly put on in the 1860s, and his name appears several times as though he is getting used to using the stamp. I had no idea what was used to inscribe his name until I looked on eBay and found a similar metal stamp for sale – so now I know.

There is such an interest in old tools and much information to be found by searching the Internet. I am now enjoying gently cleaning up and examining the tools and finding out what they would have been used for. I have made a little display of them at the Society’s Family History Centre in Sherborne so do pop in and have a look at them if you are interested. I am at the Centre on Friday mornings and would like very much to hear from anyone else who may have family tools still in use or tucked away waiting to be rediscovered and perhaps with stories, like that of George, to share. 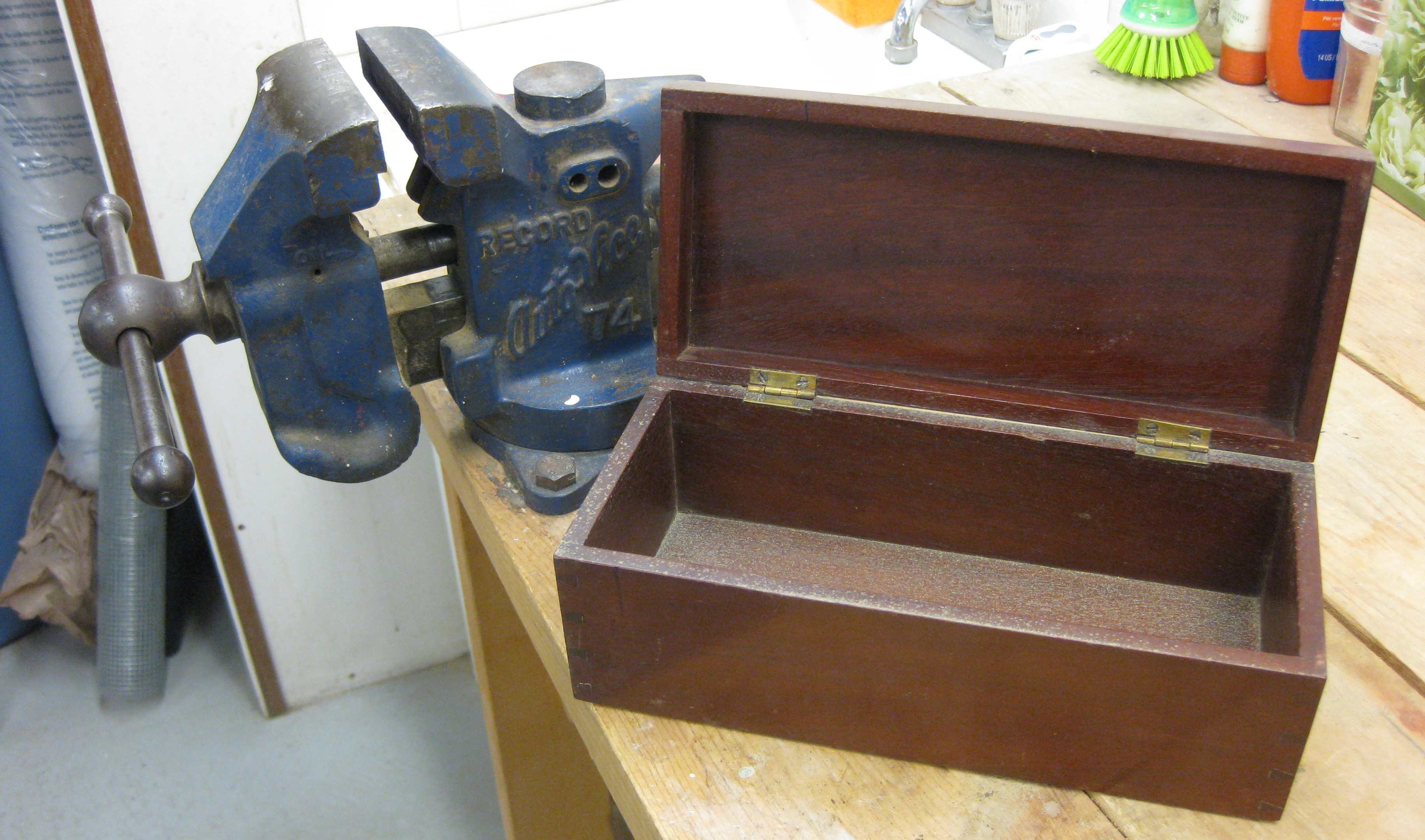 One thing that I was really thrilled to find, when I last visited my brother who lives in America, is that he is still using the old vice that used to be in our grandfather’s workshop in Nether Compton and I photographed it together with a wooden box that had been made our grandfather, Arthur – how wonderful to know these old family tools are still very much in use and that simple wooden boxes, beautifully made, may hold a key to our past.