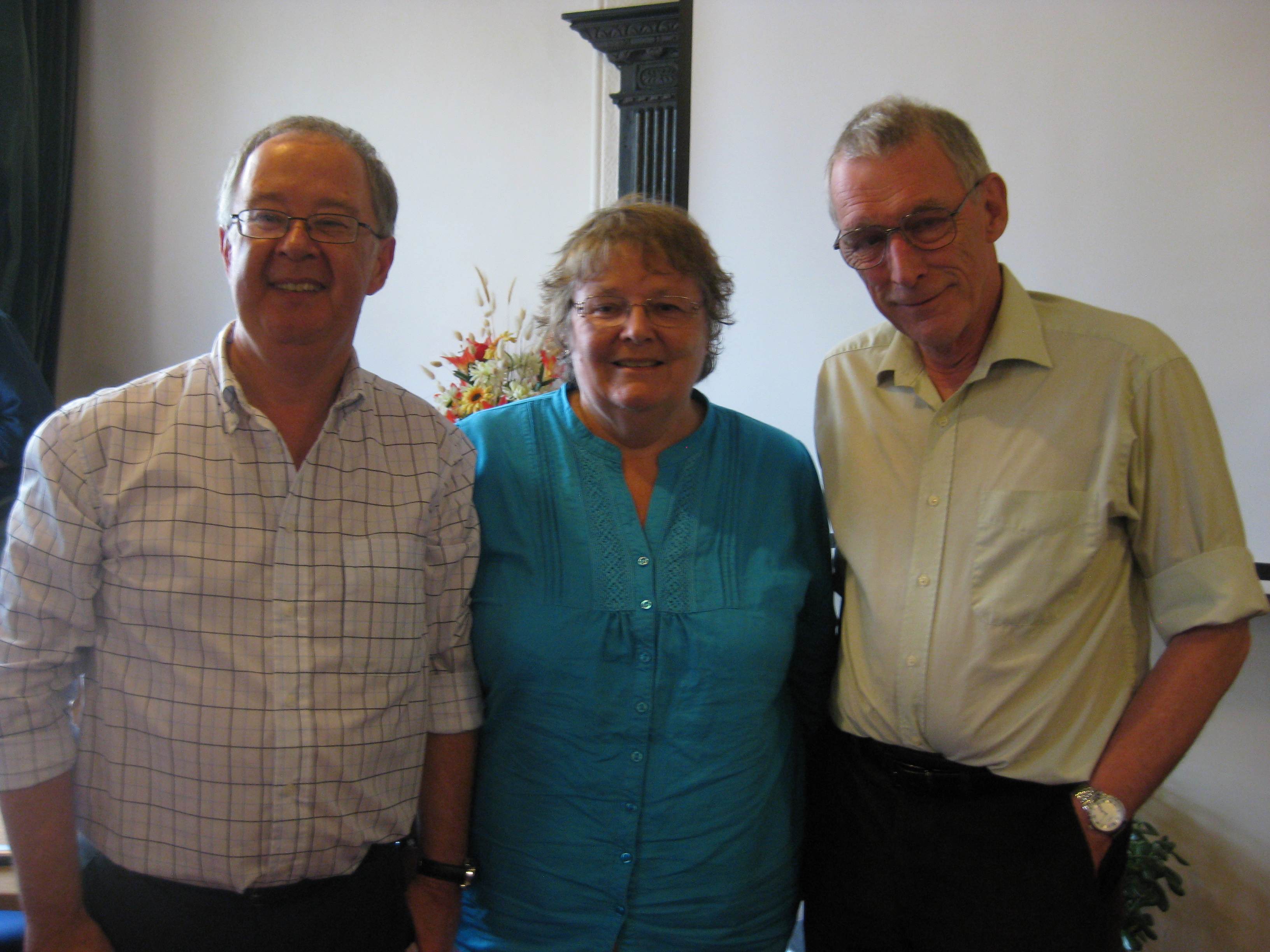 I’m not sure where to start in summarizing yesterday’s brilliant talks about early photography and family history, held at our Family History Centre in Sherborne – there were so many fascinating facts and wonderful images that any summary is bound not to be fully representative. All of the three speakers gave well-thought-out and wonderfully illustrated presentations and they were all fluent, interesting and entertaining – it isn’t often that you can say that about a multi-speaker event!

Our first speaker was Professor John Hannavy who guided us through the early history of photography, describing the work of studios in the nineteenth century when sitters had to keep rigidly still for an exposure time which could be of several minutes duration. 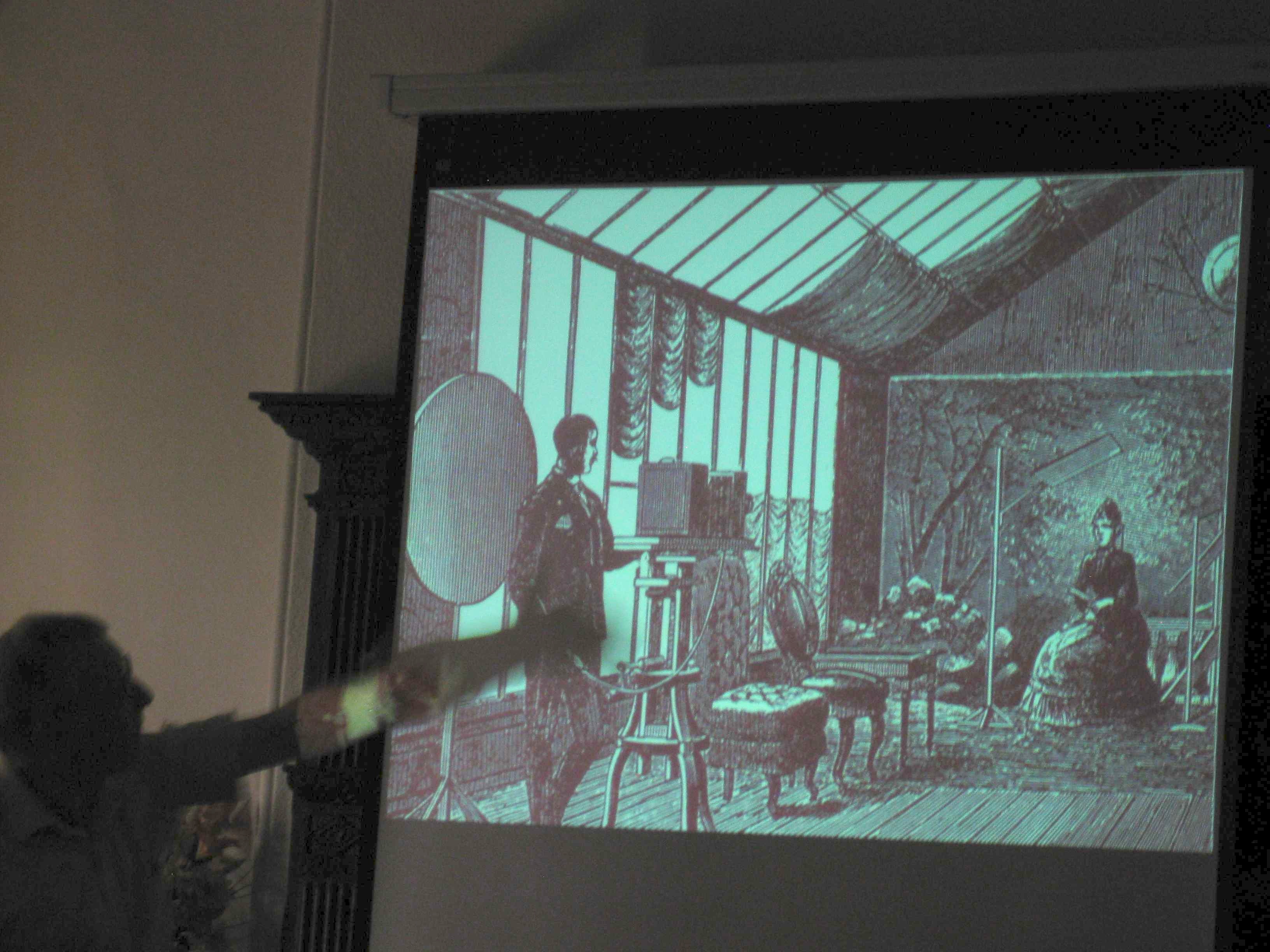 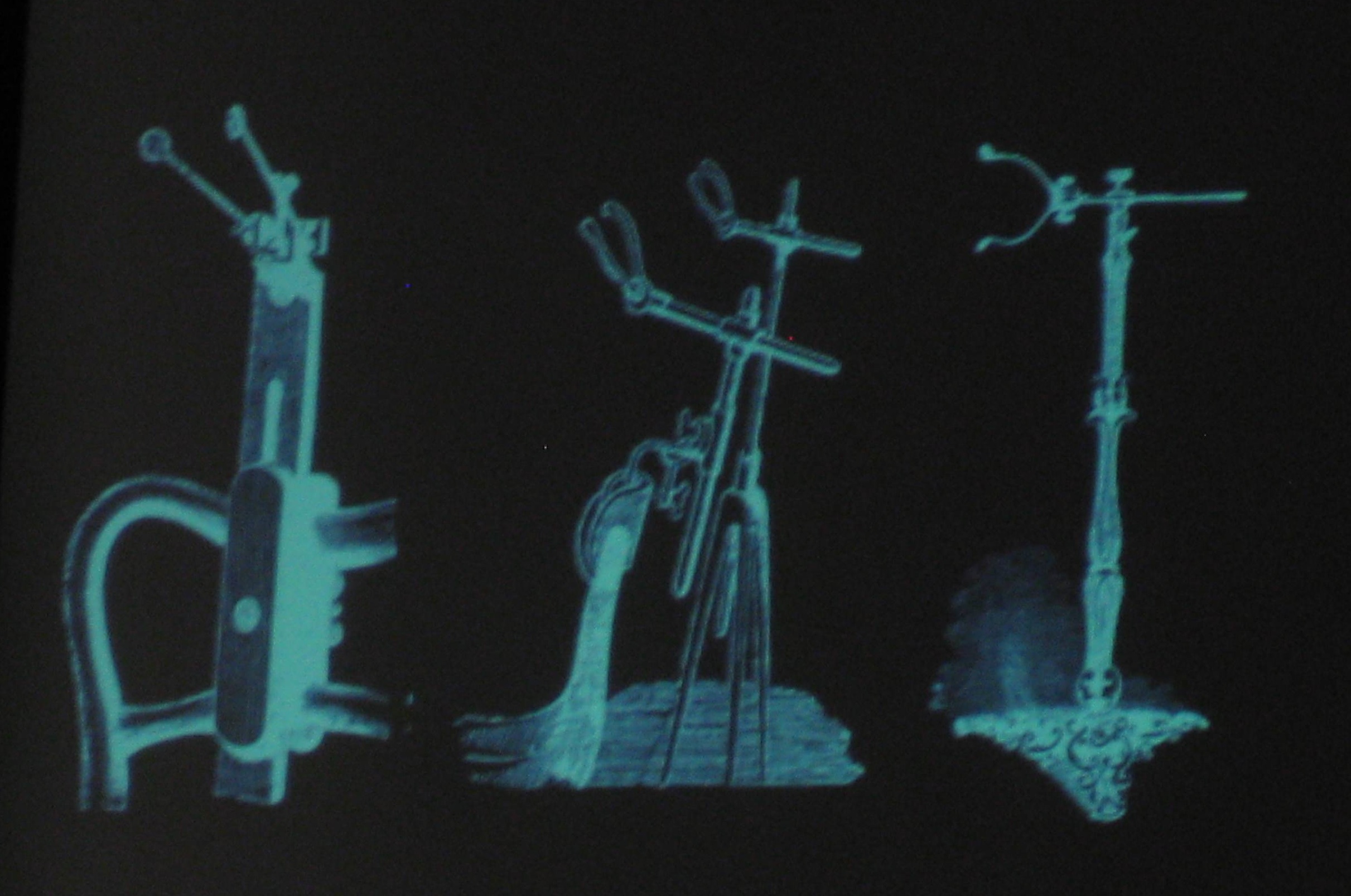 In order to ensure that there was no movement at all the subjects were often held in place by clamps which were then hidden by clothes or drapes, though sometimes they can be glimpsed behind the sitters. Professor Hannavy said he often used to ask his students to try to sit perfectly still for two minutes to demonstrate how difficult this is. He only asked us to try it for 30 seconds but within just a few of those seconds some people had blinked and others had smiled or moved slightly and would have spoiled the exposure. Try it – it is very difficult! Professor Hannavy has himself tried being held by various photographic clamps and said they can be very uncomfortable and sometime painful. 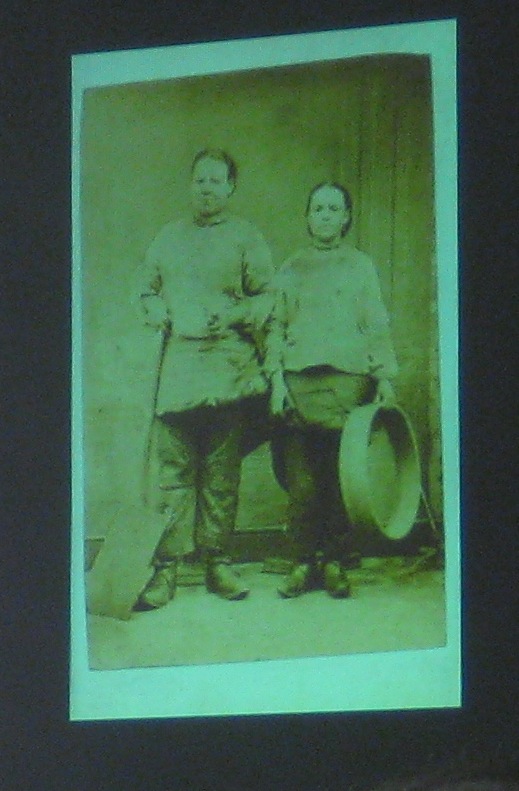 The need to stay still, of course, accounts for the rather dour expressions on the faces in Victorian photographs and what can sometimes seem to be very rigid stances. For family historians with unlabelled, undated photographs, the clothes being worn can often give an indication of a date but Professor Hannavy cautioned us about assuming anything about the status of our ancestors simply because they might have been photographed in smart clothes in a professional studio. Having a studio photograph taken was relatively expensive and for many people it may well have been a once-in-a-lifetime experience, to mark a significant event such as an engagement or other family occasion. Photographers also kept a stock of ‘smart’ clothes in their studios for people to borrow so the clothes they are wearing may not reflect the actual social status of the sitters. The 1888 invention of the Kodak camera for the first time put photography into the hands of ordinary people. 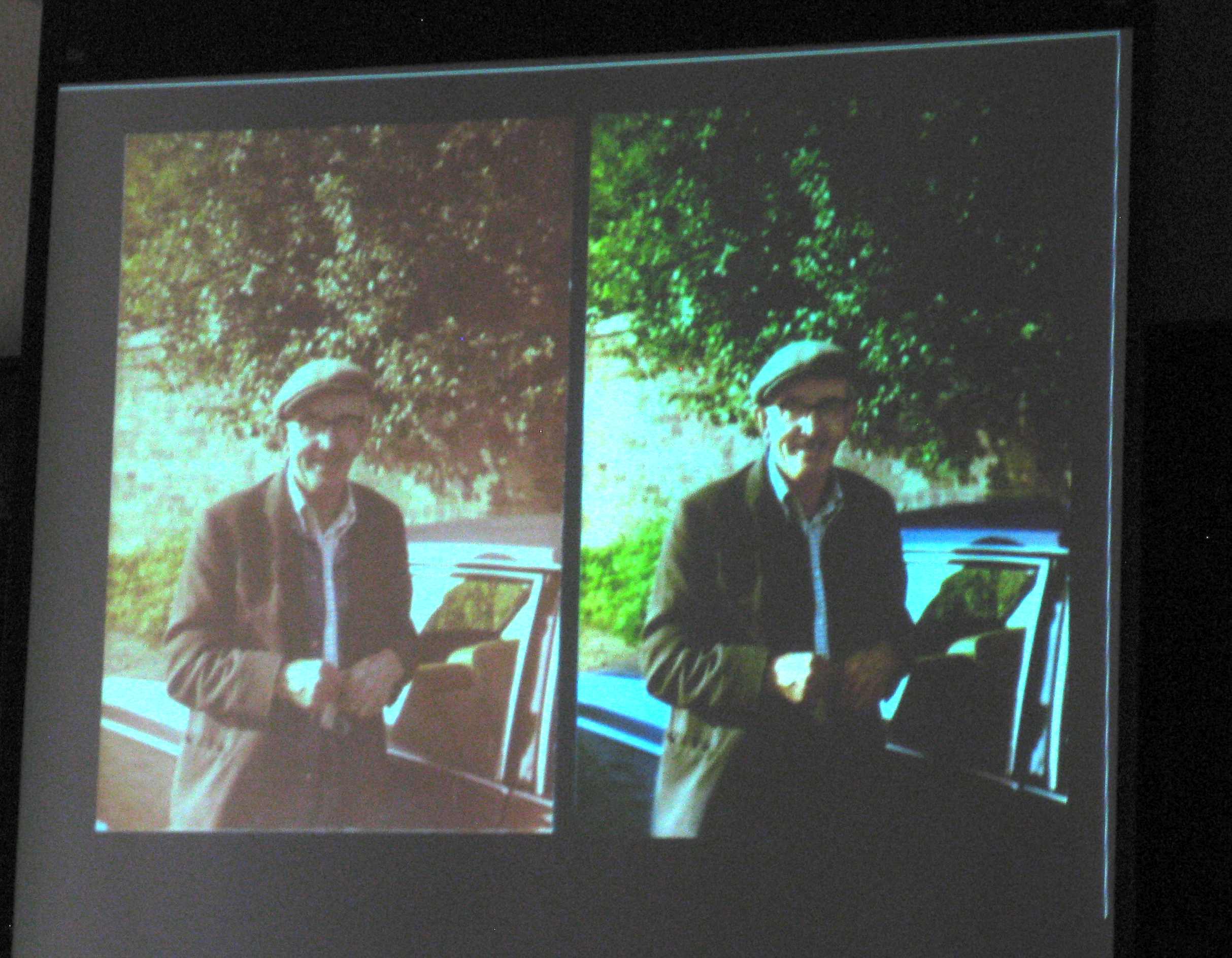 A 1970s colour photograph before and after having had the colours refreshed.

Many of our more recent (relatively!) colour family photographs, for example from the 1960s and 1970s, will have lost a lot of their colour and faded to a reddish-tinge and Professor Hannavy pointed out that there is now software which can identify the lost colours and restore them accurately with very impressive results. He also mentioned that the only colour film which did not fade was Kodachrome! 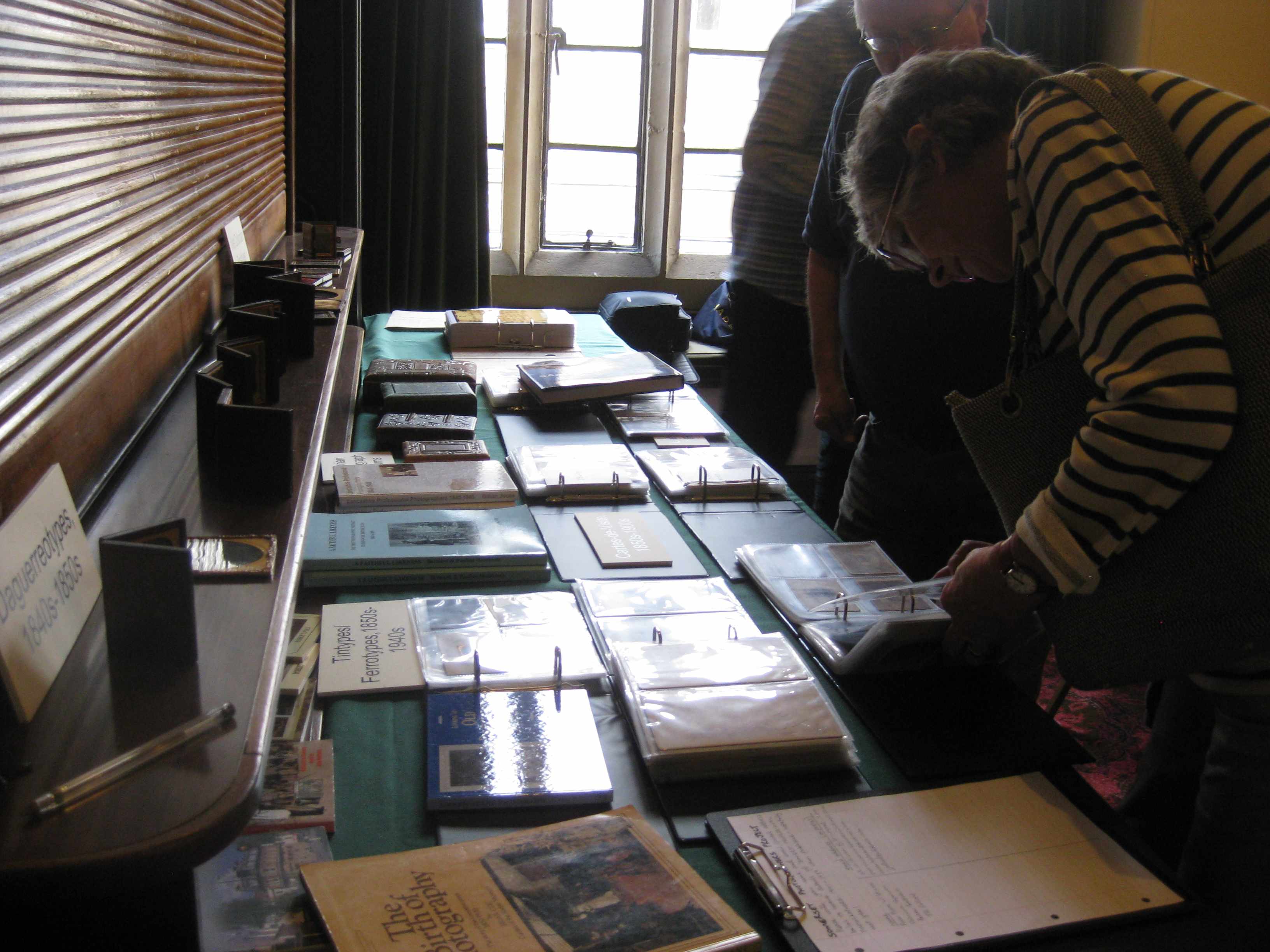 We had a short break after Professor Hannavy’s talk to give us a chance to look at the wonderful display of material from the collections of Robin Ansell and Allan Collier, and to buy books at generous discounts from Professor Hannavy and from our own SDFHS bookshop. 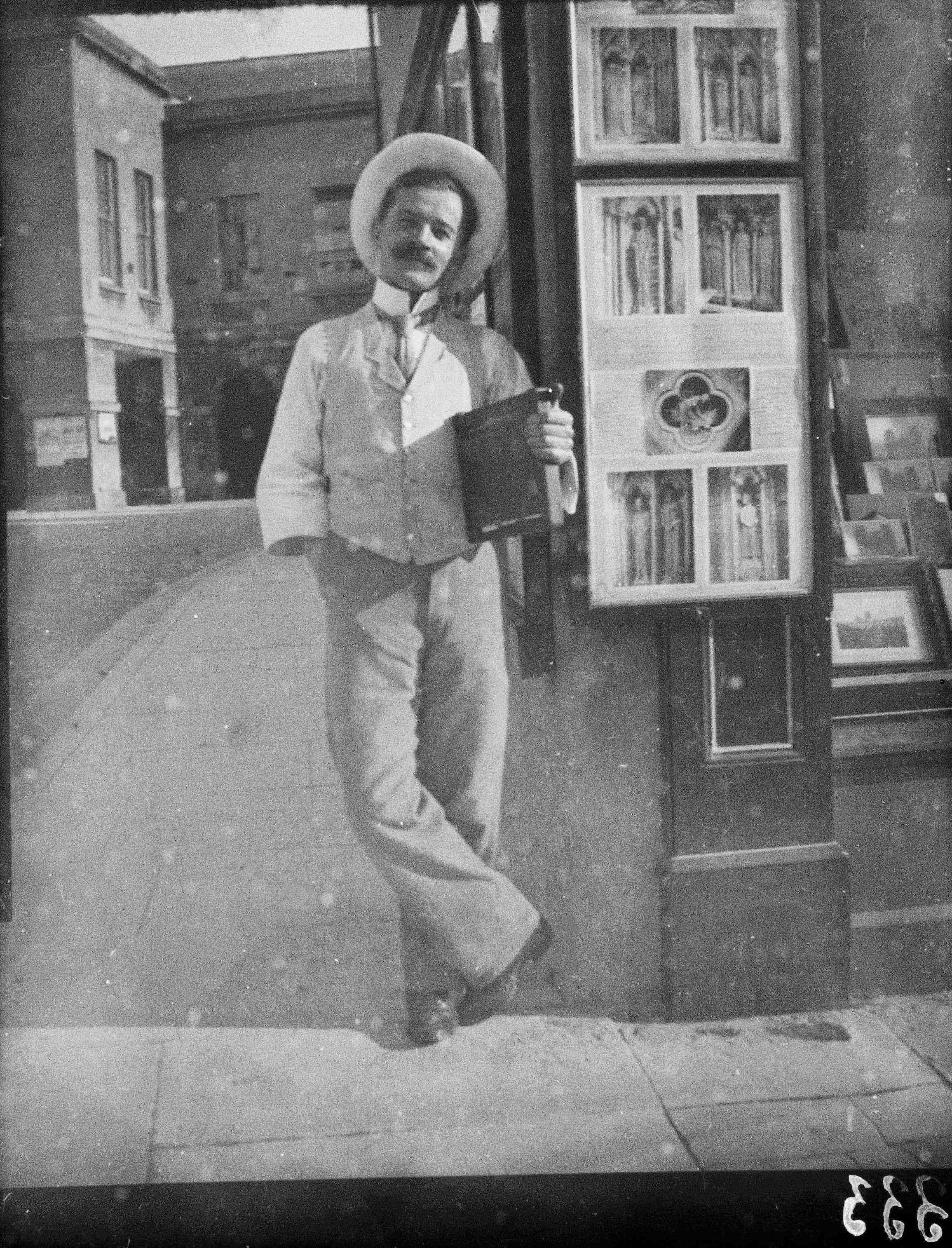 Bertie Phillips outside the studio and shop in Wells. This is Ann-Marie’s favourite photograph in the Phillips Collection.

The second speaker was our Chairman, Ann-Marie Wilkinson, who, with her husband Steve, is documenting and researching the Phillips Photographic Collection (held in the Wells & Mendip Museum). The collection consists of thousands of glass plate negatives of various sizes, taken by Thomas Phillips (1841-1914) and later by his son Bertie, at or from their studio in the Market Place at Wells. Steve, who was also present yesterday, had spent his evenings for two years rephotographing the negatives using a light box and a fixed camera, and the work that he and Ann-Marie has done has created an invaluable resource for family, local and photographic historians. They have researched many of the subjects of the photographs, finding out who the people were and where they lived and, if photographs are undated, checking local census returns which can be very helpful, particularly if the images include children whose ages are given on the returns. Professor Hannavy had pointed out in his talk that since nineteenth century photographs were all contact prints, there was no way to enlarge them so if you wanted two different sizes of photograph you had to expose two differently-sized negatives, and Ann-Marie showed us a fascinating example of this, with a 1902 wedding photograph of Angelina Bryant and Fred Warren where it seems, from the names at the bottom, that the Bryant and Warren families wanted different sizes of photograph so two exposures were taken. At first glance they seem to be identical but if you look closely you can see slight differences – especially in the position of the young lady with the bouquet on the right.

Ann-Marie also demonstrated the very high quality resolution of the negatives by showing us enlarged details of images. Above the heads of the group below is an open window. 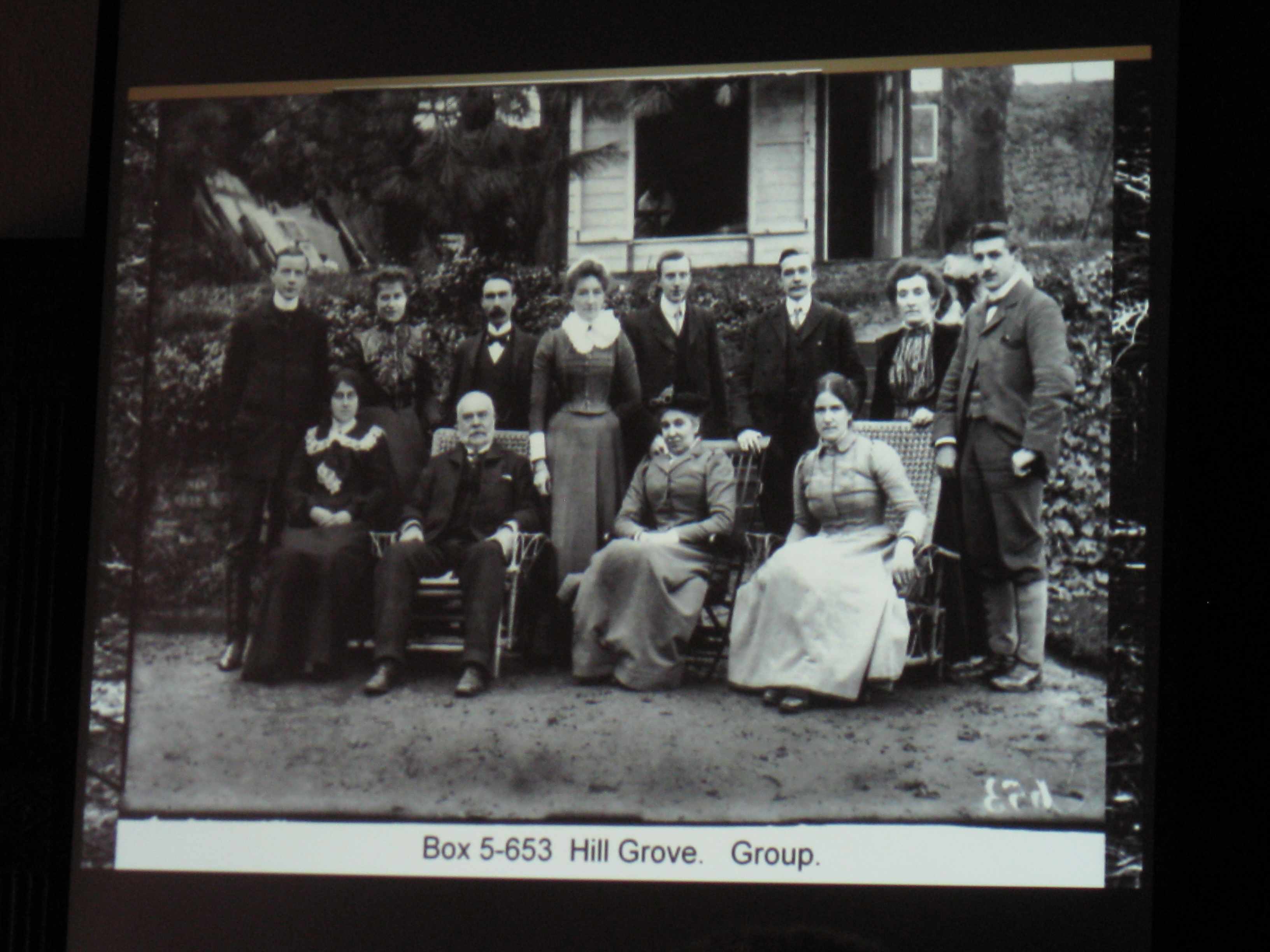 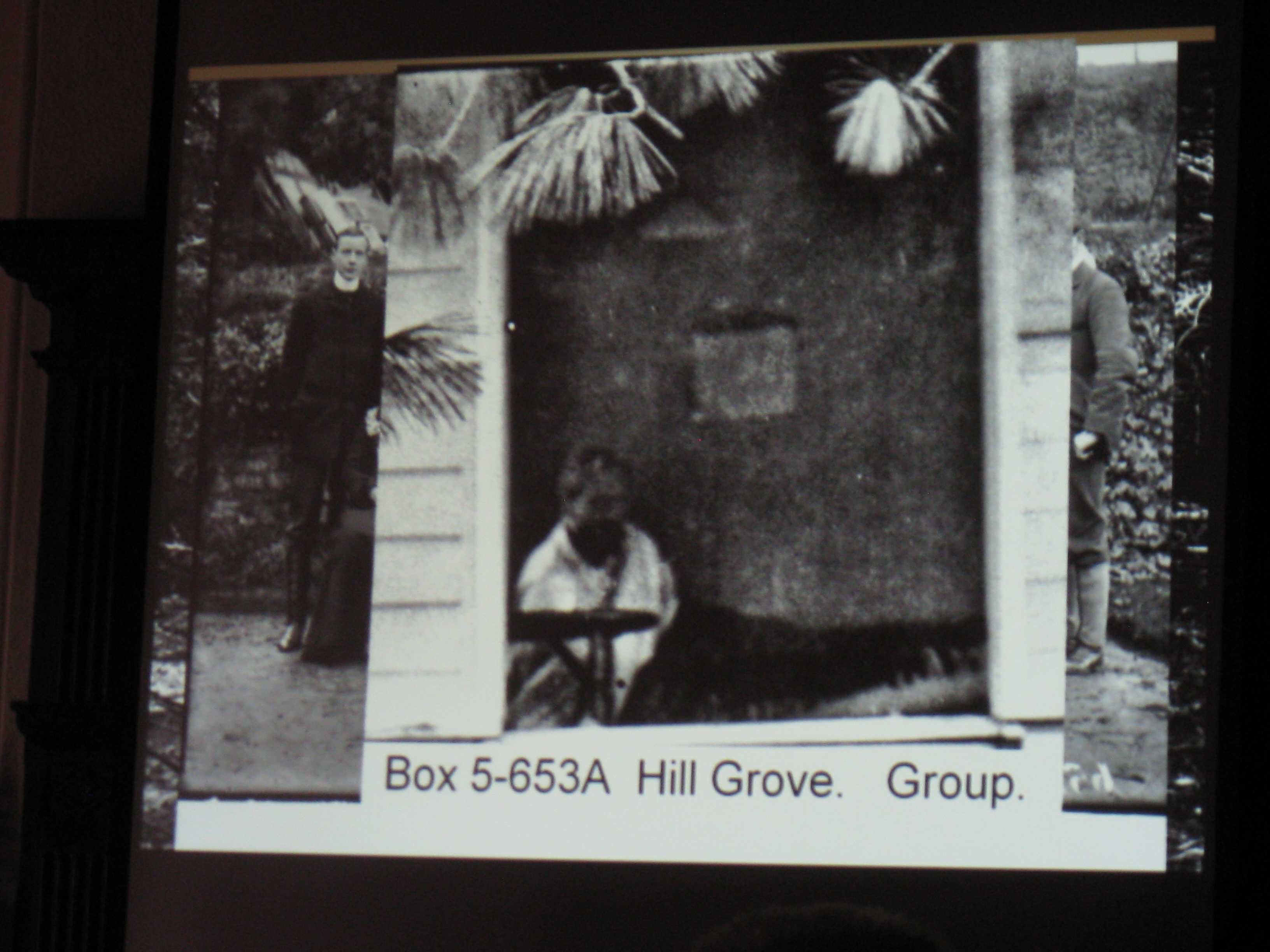 When the image is enlarged details of the person sitting inside the room become visible. 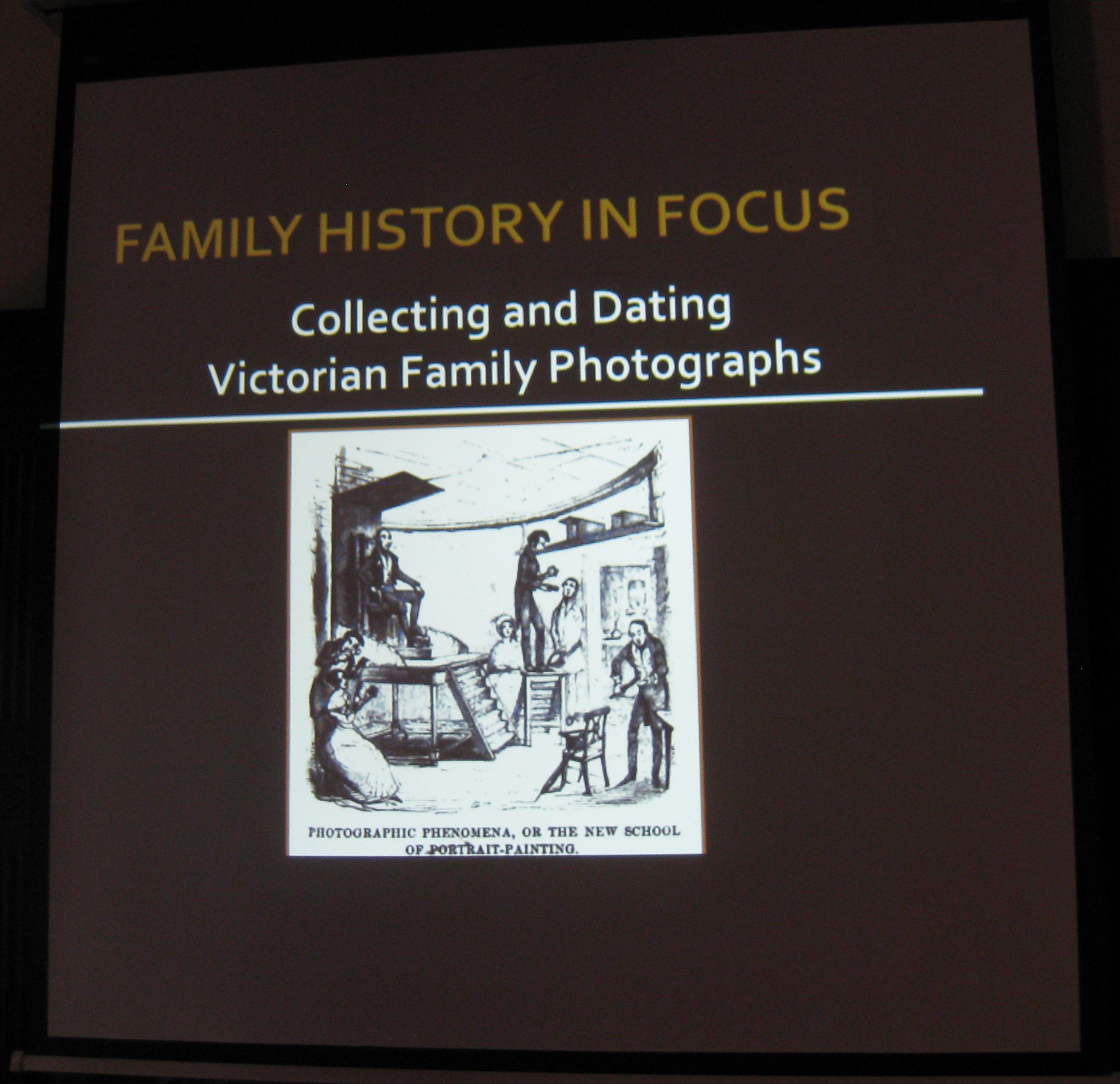 After a short tea/coffee break our final speaker of the day, Robin Ansell, described collecting and dating Victorian photographs. Robin is the SDFHS Librarian Emeritus and is now partially-sighted so he started his talk by acknowledging the help he had received from Barbara Elsmore (who was present) and Graham Bendell in preparing his presentation. An article about Robin’s return to public speaking, with the help of Barbara and Graham, appeared in the Western Gazette recently and can be read online.

Robin himself has a wonderful collection of Victorian photographs and some were on display at the back of our meeting room. The earliest photographs are known as daguerrotypes, after the inventor of the procedure, and Robin referred to an image taken in Paris in spring 1838 which has the earliest reliably-dated image of people. It is a street scene where the very long exposure (at least 10 minutes) meant that no moving traffic or pedestrians have registered – only the shoe-shine boy and his customer are preserved. 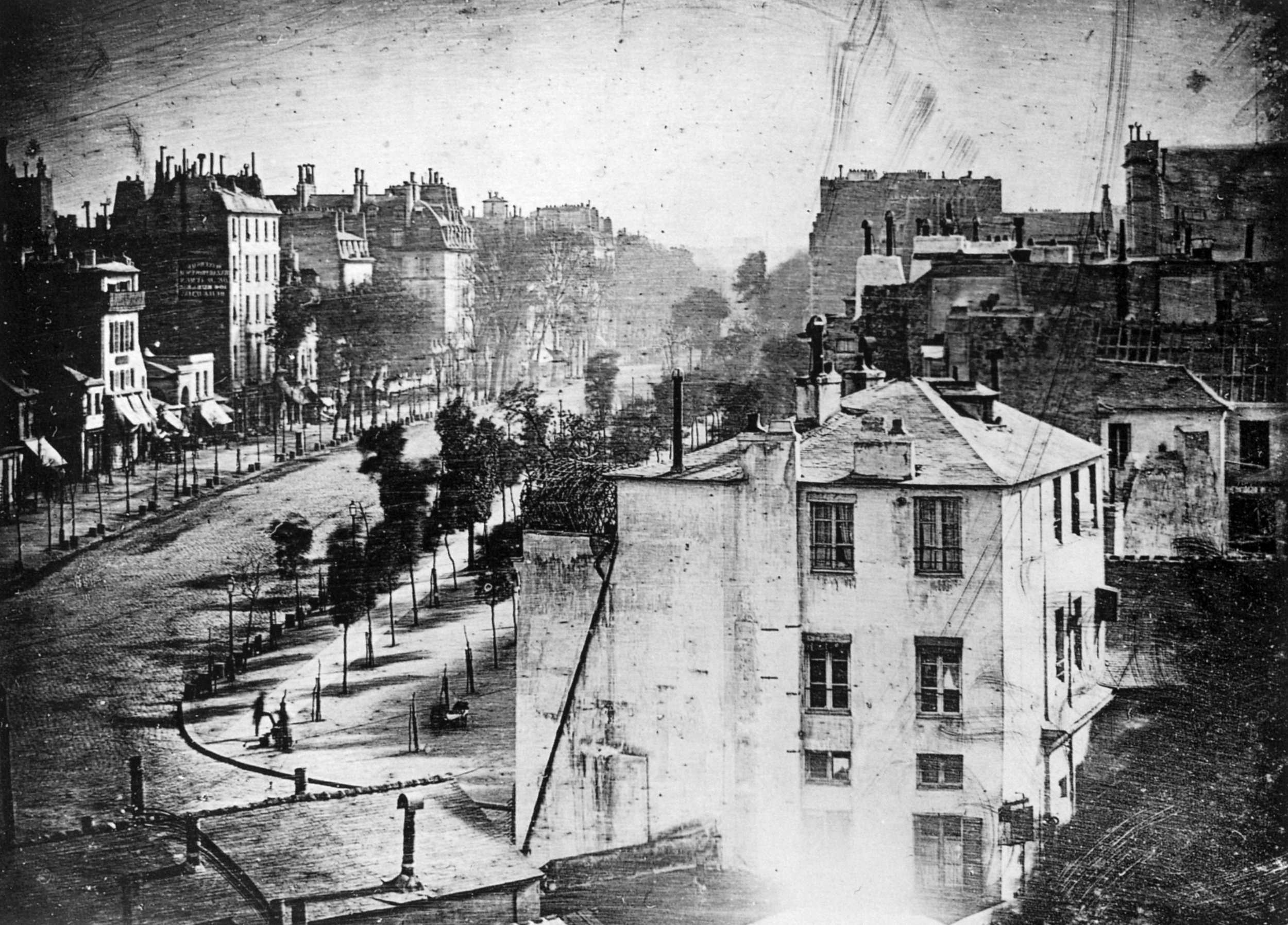 A cheaper alternative, the ambrotype, came into use in the mid 1850s, followed by tintypes which lasted until the 1940s. All three gave laterally reversed positive images so, if you have a family photograph of one of these types, you are essentially looking at a mirror image and need to flip it to see what your ancestor really looked like. Robin illustrated his talk with photographs from his own collection including cartes de visite which started in France in 1854 and soon became very popular in Britian and beyond, and the larger Cabinet Cards which often give the name (and sometimes the address) of the photographer which can be very useful if trying to identify subjects or date the photograph. 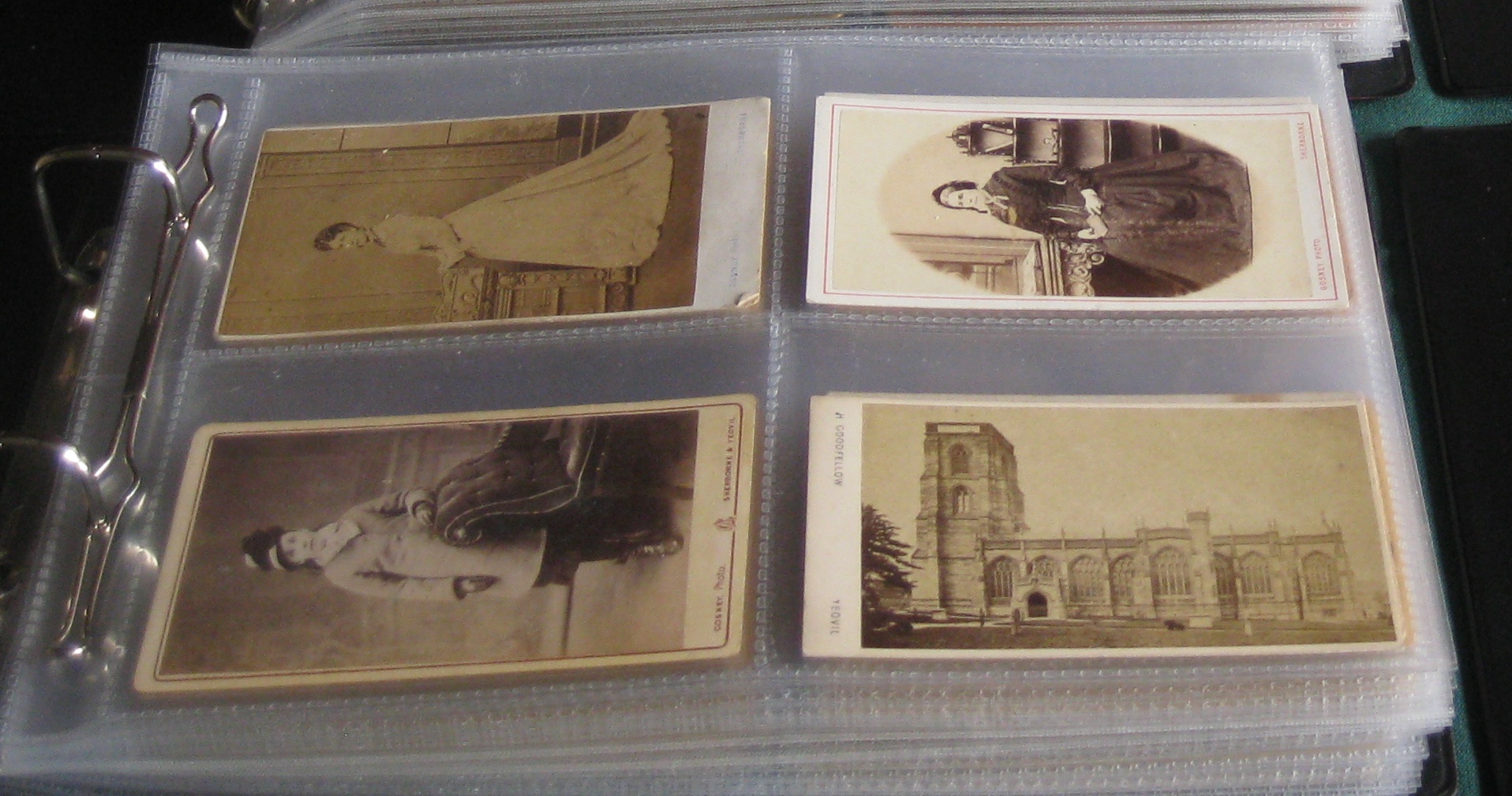 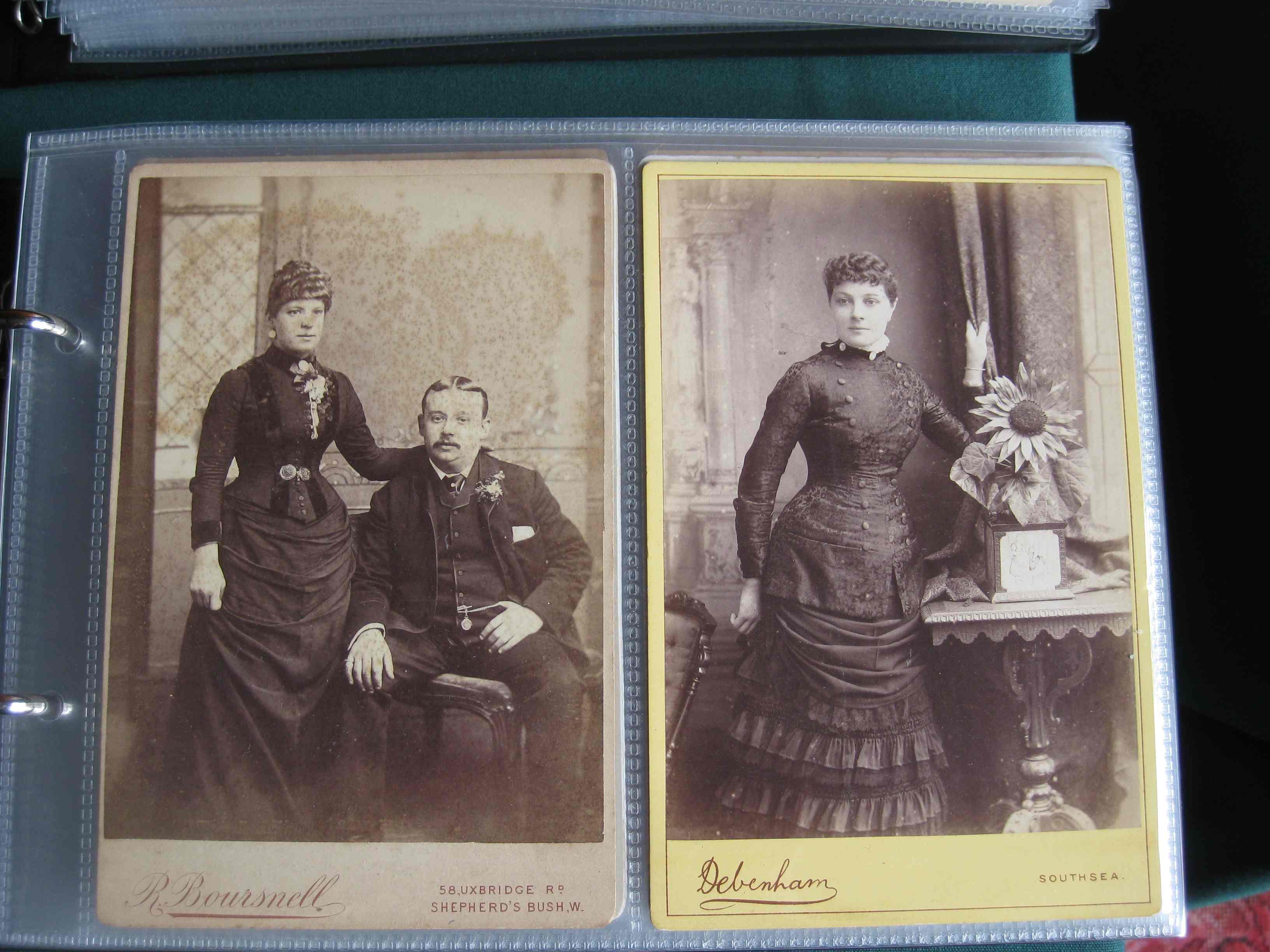 Two of the Cabinet Cards in Robin’s collection. 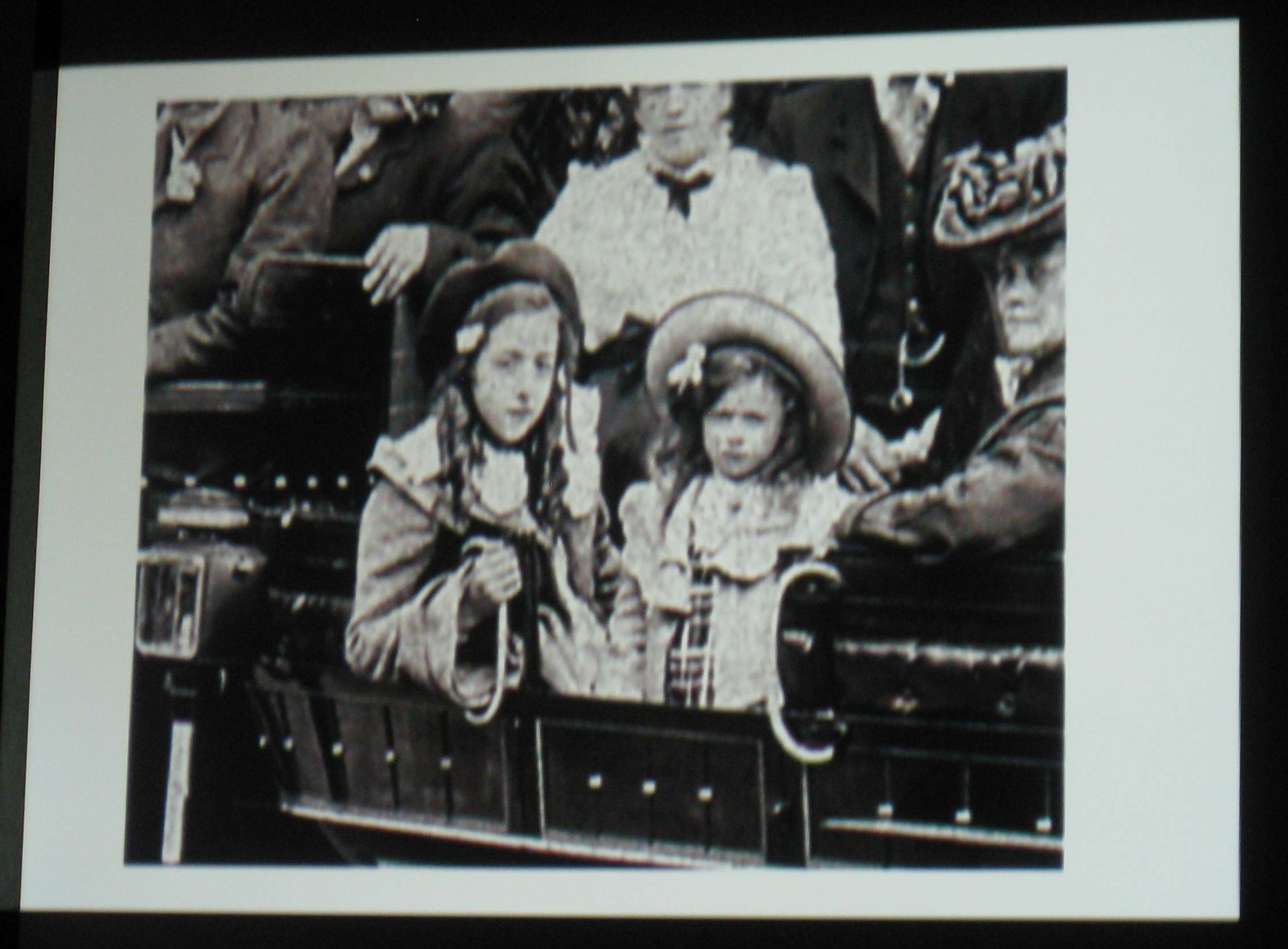 Robin also included some of his own family photographs including one of his grandmother, Bessie Howarth – the little girl in the large hat – (later Greenwood, 1897-1975) whom he credited with inspiring his passion for family history. 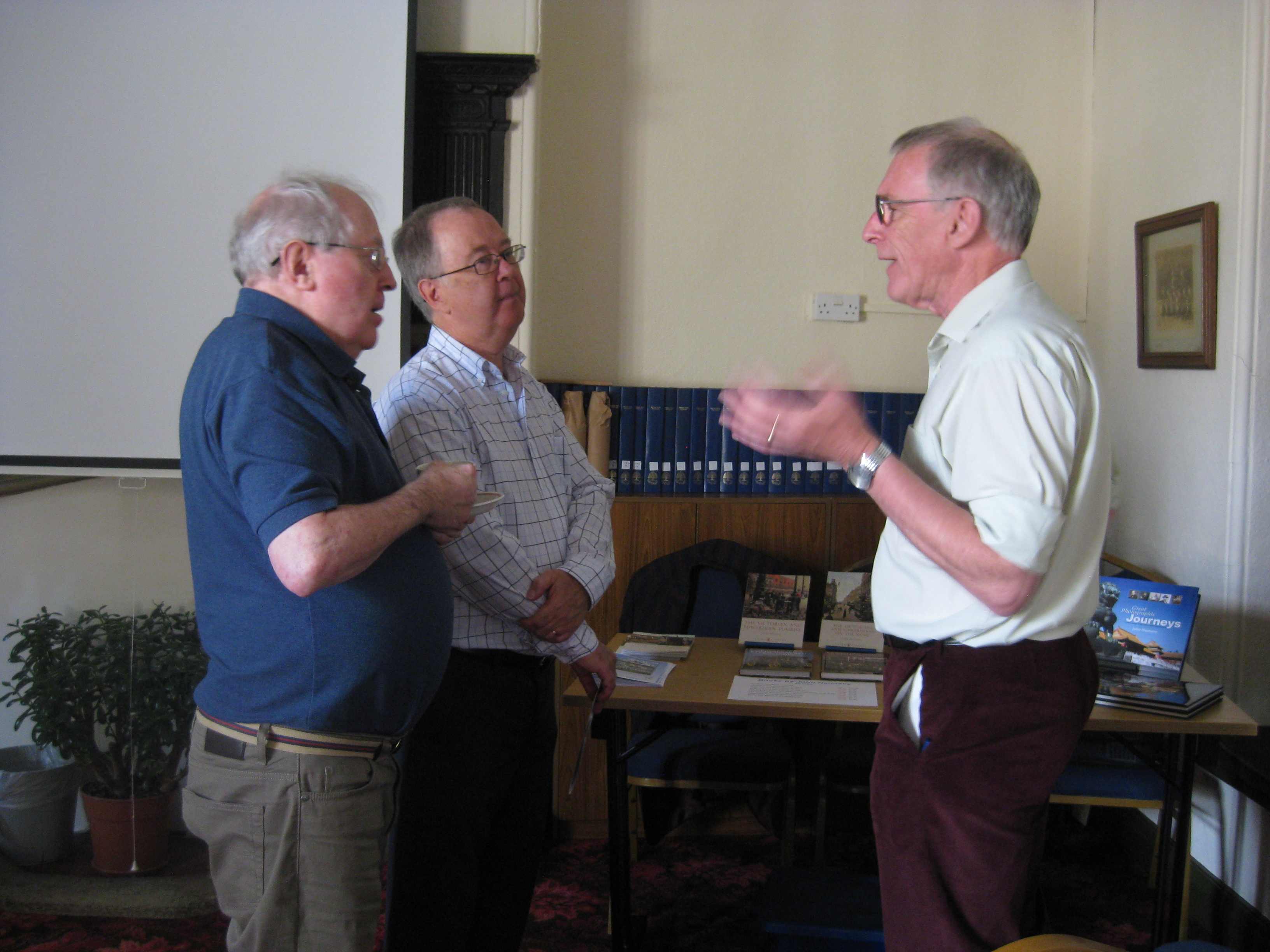 Robin and his colleagues, Allan Collier and Phil Nichols, have been recording and documenting all those professional photographers active in the historic (ie pre-1974) County of Somerset, between 1841 and 1939. The research will be published, hopefully within the next year,  in the form of a reference book and accompanying data DVD. Numerous examples of the photographers’ work (both topographical and portraiture) will be included in the form of digitally scanned images of Cartes de visite, Cabinet Cards etc.If you would like to be informed when the book is published, please let Robin know.

We will be hosting a ‘follow-up’ event on Saturday 18 October (2-5pm) when Robin Ansell and Mike Bolton will lead a skills workshop providing detailed guidance on the use of photography in family histories. See here for details and how to book.