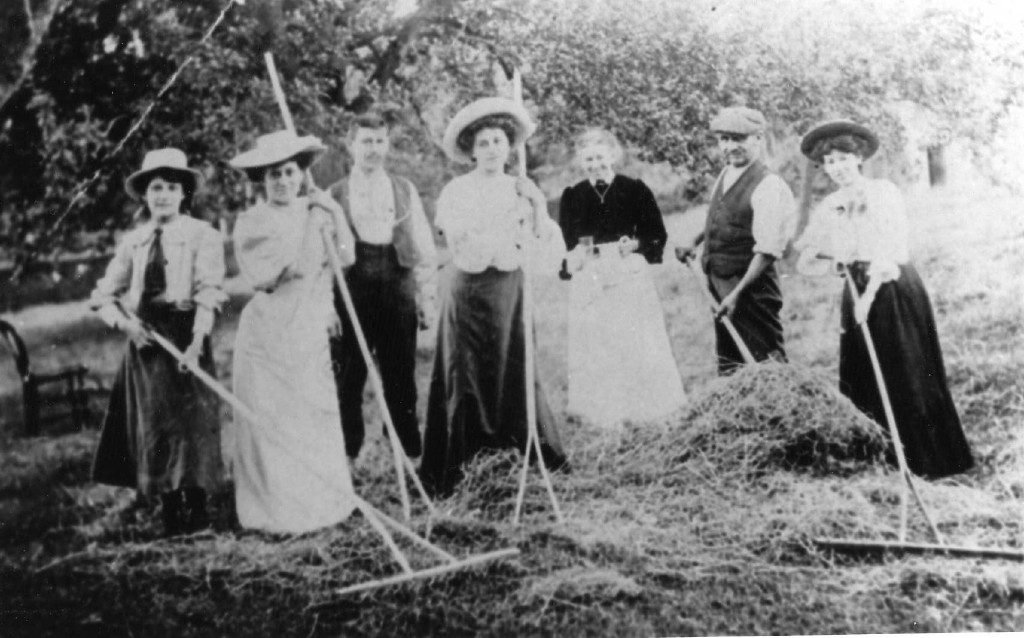 As anyone interested in family history will know when facts come to light that enable a name to be added to a family tree it is not long before starting to wonder what this person might have looked like. Many of us will have photographs back to our grandparents and some are lucky to be able to go back to the great grandparents but beyond this it may well be much more difficult. It is often tricky too to travel out sideways as great uncles and aunts and all the associated cousins are likely to be very unknown quantities by now to a lot of us. When I started keeping my family tree electronically I really liked to be able to add a little thumbnail photo of identified relatives as this way they suddenly became a person rather than just a set of facts. Group wedding photos are a great source of faces and I was very fortunate in that my cousin came up with two important family wedding photos. The first of which was my paternal grandparents’ wedding in 1908. 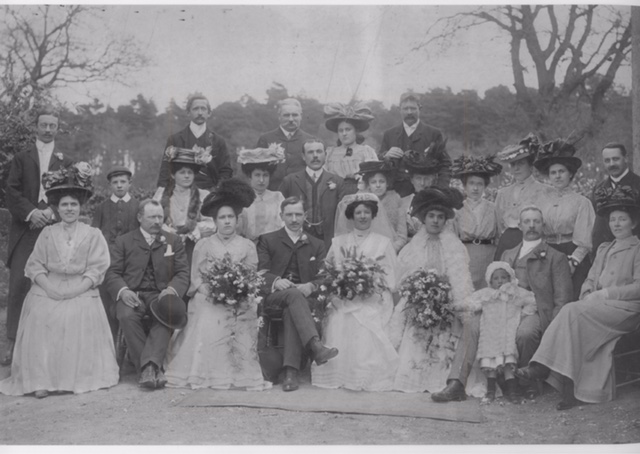 This photo contains 24 people. The second photo, with 32 people,  is taken at my grandfather’s sister’s wedding in 1900. 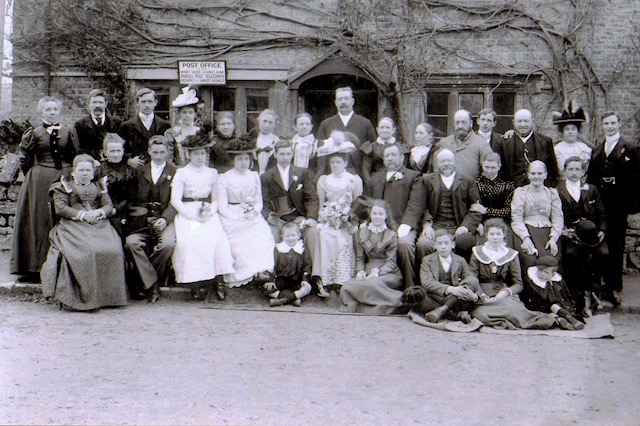 Initially on looking at the first photo only the bride and groom could be identified. On the older photo no one was known to us at all. By checking against information in my family tree over, it has to be admitted, some years gradually information has come to light. Cousins have been contacted, documentation and corroborating photographs have been found and slowly but surely identification of 53 faces out of a possible 56 wedding attendees has now been made. Some of the guests attended both weddings which was a great help. A personally exciting first set of great grandparents to be identified were found in the 1900 photo plus a second set in the 1908 photo and so a lot of little thumbnail photos could be added to the family tree.

It seemed that my great grandparents would be as far back as I might hope to venture but that didn’t stop me hoping that something more might turn up and turn up it did! My cousin loaned me my great grandmother’s Victorian album of family photos, very few of which had names against them. I carefully removed them all from the album and put a pencilled number in the gap and a corresponding number on the back of each photograph and I scanned the front and back of every one. Because many of them were by local Somerset photographers I showed them to Robin Ansell and Allan Collier as they were compiling their new book on Somerset photographers at the time and I thought that there might have been something of interest to them among them. Photographs often had the name and address of the photographer on it somewhere and this can greatly help in identifying the age of an an old photo. Just like so many of these old surviving albums of photos, hardly any pencilled names were added to help with understanding just who would have been contained within the pages, other than my grandfather and my father adding a handful of clues in pencil at a much later date. We have reason to believe that great grandmother Fanny Payne began collecting photos when she was 21 in 1866. This does not mean, though, that this was the earliest date for any of the photos as it would also seem, once it was known a younger family member was starting out with a collection, older photos would appear from other family members to give the album a good start. Fanny had a not inconsiderable 166 pockets to fill. There was a pattern to their placement as often husbands were next to wives and families grouped together – other than this we had very little to go on. There were two couples pictured twice and Robin and Allan kindly gave me an estimated date for all four of the photos (two c.1865 and two c.1875). 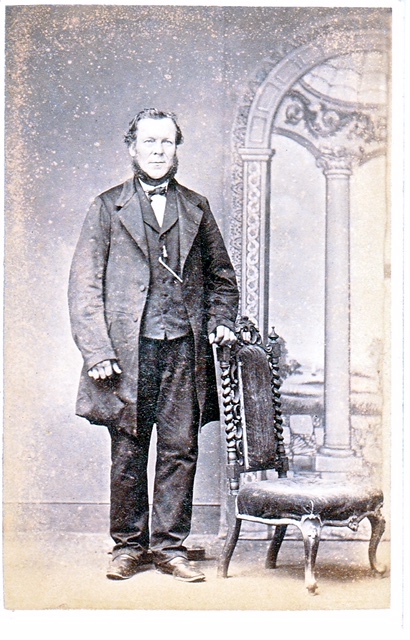 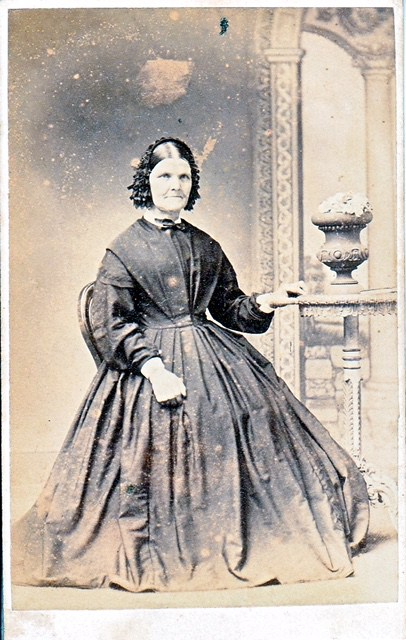 Allan and Robin have both been collecting and working with old photos for many years and the expertise they have gained means they can study various aspects of an old studio photo and give an accurate estimate of the date. This was very thrilling for me as because of this I was able to now know what my great, great grandparents, Solomon and Mary Collings, looked like and how they dressed. I was also able to confirm a family likeness to one in particular of Solomon’s three sons who had been picked out in the 1900 wedding photo. Coincidentally a third photo was taken at the same time and this proved to be only daughter Sarah who was still at home at this time  but married a year later. 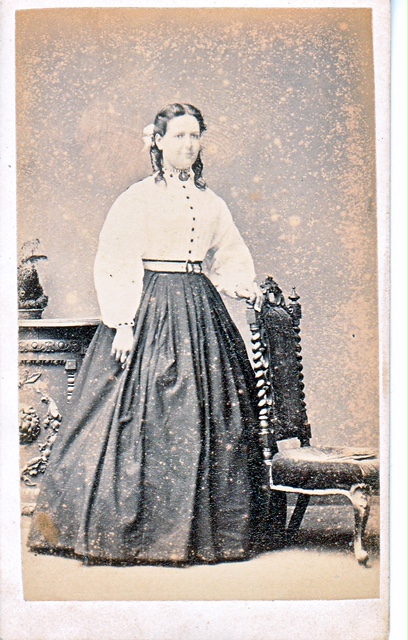 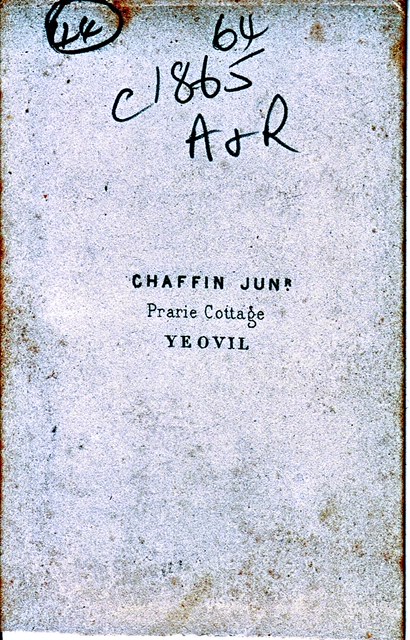 Left: Sarah Collings (1838-1915). Right: The reverse of all three photos is the same, showing here the pencilled note with Allan and Robin’s estimated date

Now that Robin and Allan’s book, Secure the Shadow: Somerset Photographers 1839-1939 compiled in conjunction with Phil Nichols, has been released it is possible to check that the photographer John Chaffin, who took the likenesses of my great grandparents back in 1865, did operate a photographic studio at Prairie Cottage in Yeovil at around the time my photo was taken, as an old advertisement has been found dated to 1869. This alone would be a great help in dating this photo but I was fortunate to have had the addition of Robin and Allan’s personal skills which date the photo more accurately to 1864/5.

The book is full of information on nearly 800 photographers together with an extremely helpful CD containing biographies for them all. I checked out the biography of John Chaffin and found a mindboggling 74 page PDF which included all that could ever be found, I am sure, on the life and career of this man. Included are 51 photographs showing a wide variety of his work collected by the authors over the years. Overtime this book is going to prove very useful to me and to many others I am sure, as my knowledge increases and I want to know more about unidentified family photographs.

Secure the shadow: Somerset Photographers 1839-1939 will be officially launched on Friday 28 September at 2:00pm at Yeovil Library and Robin, Allan and Phil will be on hand to assist you with perhaps that vital identification that will help you put a face to one of your former family members so do come along if you can and bring along some old photos you may have that have been puzzling you.