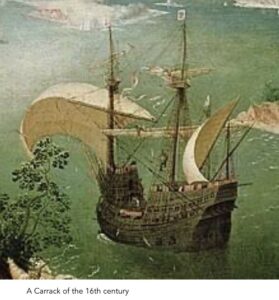 Serendipity (unexpected and fortunate discoveries) can be a marvelous feeling, not least in the course of family history research. Some years ago at the British Library, I noticed, quite by chance, that it has an Index of Names associated with its Manuscripts Collection. Such indices are invaluable to genealogists. Nothing ventured, I inserted the name ‘PITFIELD’ and the search referred me to an amazing document.

This is a letter from Thomas SACKVILLE, first Earl of Dorset, who was the Lord Treasurer of England in the reign of King James I. He wrote the letter from Dorset House in the Strand on the 27th of November 1605 to a Mr GARAWAY, who was a Treasury civil servant. The letter confirms that King James ‘under the signet’ has ‘given and bestowed’ upon two sea captains ‘amongst others’ the sum of £100* for service at sea during the last year of his predecessors reign. On behalf of the late Queen Elizabeth he is rewarding Captain Giles THORNTON of the ‘Pearse’ from Plymouth and Captain Sebastian PITFOLDE (Pitfield) of the ‘Recompence’ from Weymouth.

During a voyage of trade/exploration in the Americas they had discovered a Spanish Carrack** in the ‘rodes’ (anchorage) of Secembra*** and ‘did give spedye intelligence thereof to her late Majestie shipps being then at sea’. The Carrack was seized and Thornton and Pitfolde ‘were afterwards themselves employed in bringing her into Plymouth Sound and the River Tamar’. Consequently having used the victuals and other provisions and consumed their time, they had to ‘overthrewe their intended vioge (voyage) to their great losse’. Another of the expeditioners, also in the ‘Recompence’ of Weymouth, is named as John RANDOLL. He paid the Treasurer £100 for the Carrack’s cargo. Garaway was instructed to ‘paye unto his Majestie this sum and ensure that Giles Thornton receives £50 and Sebastian Pitfolde £10’. The letter is rather charmingly signed ‘Your very loving friend T. Dorset’.

The letter thus confirms that in 1603 during the last months of Queen Elizabeth’s reign Thornton and Pitfield abandoned their planned voyage to report the presence of this Spanish ship to the Royal Navy and were tasked with returning it to England. For this patriotic action they were rewarded. I’m thrilled to know of this part of an ancestor’s story.

How apt that Pitfolde’s ship was called the ‘Recompence’!

Sebastian Pitfolde 1517 – 1613 was the youngest of nine sons of Robert Pitfolde of Allington who died in 1586. They are my earliest confirmed direct ancestors with the Pitfield name. Robert and his sons are the progenitors of all subsequent Pitfields in Dorset, Devon and beyond. An indexed booklet of the Pitfield family can be downloaded at www.pitfield-family.co.uk. It contains hundreds of names and many Society members must have Pitfield connections.

It has been suggested that since Sebastian was unusual name in England and given his seafaring and exploration activity, it derived from an earlier connection with Sebastian Cabot. Indeed there are other Hispanic names at this time in the Pitfield family, such as Renaldo and Ferdinando. The name Sebastian continued in the family for subsequent generations and there was still a Frederick Sebastian Pitfield in the 1960s. I wonder if there are any with the name Sebastian today – does any member know?

12 August 2020
From: Carole Bonifas To: Michael Pitfield,
I’ve just read your story of your ancestor’s capture of a Spanish Carrack, and his reward, which I found fascinating. I’m writing about the location of the capture as you say you haven’t located it.

I believe that Secembra is the Portuguese port of Sesimbra, about 40 km south of Lisbon on the south facing coast of the Setubal peninsula (an area I know very well) The idea occurred to me immediately while reading the blog, for the following reasons:

Finally I’ve just had a quick look on the Wikipedia entry for Sesimbra which states: During the Age of Discoveries, Sesimbra became an important seaport. Even king Manuel I lived here for a while. In the 17th century the fort Fortaleza de Santiago was built along the beach, as part of Portugal’s coastal defence. On 3 June 1602 an English fleet defeated a Spanish galley fleet and in addition captured a large Portuguese carrack and severely damaged the fort.

I’d also suggest that the family name Sebastian could indicate a connection with Portugal as the boy King Sebastian (Sebastião) was greatly revered and mourned when he died on an ill-fated military excursion into Morocco in 1578 at the age of 24.

Thanks again for posting the story of the Carrack. It’s a reminder to all of us that we should check family names wherever possible!

PS If you’re ever in that area of Portugal, Sesimbra is well worth a visit. It has a splendid beach, and fantastic fish restaurants. The nearby mountains of the Serra de Arrabida are stunning.