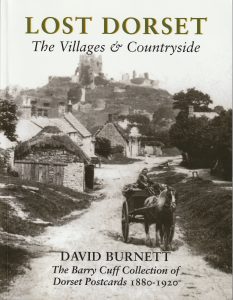 Lost Dorset – The Villages and Countryside is the title of David Burnett’s latest book and also of his recent talk given in Sherborne.

David founded the Dovecote Press in 1974 in the small hamlet of Stanbridge near Wimborne to initially publish the first of three illustrated books about Dorset. All three went on to become best sellers. I had a very personal reason for wanting to meet David as I had found, quite by chance while flipping through his first book – A Dorset Camera 1855-1914 – a photo of my great grandfather standing outside the forge in Nether Compton. The inscription reads ‘Mr Collings outside Collings and Bicknell’s yard Nether Compton’, so I know firsthand not just the joy that finding a relative in an old photo in a book can bring but also the additional family history that comes with it too.

In his book David has featured some of the over 10,000 postcards collected by Barry Cuff as the basis for his look at times past in the countryside of Dorset. Barry has been collecting books since he was 15 and added collecting postcards when he was given four Edwardian albums of local scenes because he could see their value as a source of local history.

David selected around 350 of Barry’s postcards to illustrate his book and he set about checking the location of every single one of them. He explained that he thought he knew Dorset well but he kept finding himself travelling down little lanes into so many hidden places unknown to him. He also enjoyed many cups of tea and slices of cake because as soon as he started to wander around with a postcard in his hand, often as not, someone would appear to help him with his quest.

David began by telling us how in 1894 the General Post Office for the first time allowed an image on one side of a postcard with a space for a message and an address on the other and so local photographers immediately set about finding suitable subjects. Within the next 20 years nearly a billion postcards were sent and received.

The Post Office became an important focal point in a village along with the village shop, the school, the church, the chapel and not forgetting the pub and all are referred to in David’s book. He also looks at farming, field sports, entertainment, transport, the gentry and more besides.

If you ever have the chance to hear David talk I urge you to be there because while telling us about his book he also weaves into his narration a lifetime spent learning about the history of Dorset and his interest in the lot of the average Dorset man and his family and how they went about living their everyday lives – something he has highlighted and brought to life again via Lost Dorset – The Villages and the Countryside.   A copy has been added to the library in Broadway House in Yeovil and is available to view during opening hours.

David is currently working on a second book on this subject this time about life in the towns which will be eagerly awaited I am sure.