Barbara Elsmore has been scouring the charity shops of Sherborne collecting items, with no apparent monetary value, and using them to create a display at our Family History Centre where she hopes they will act as reminders to members and visitors of things they may have used, or seen used, in the past and become talking points. 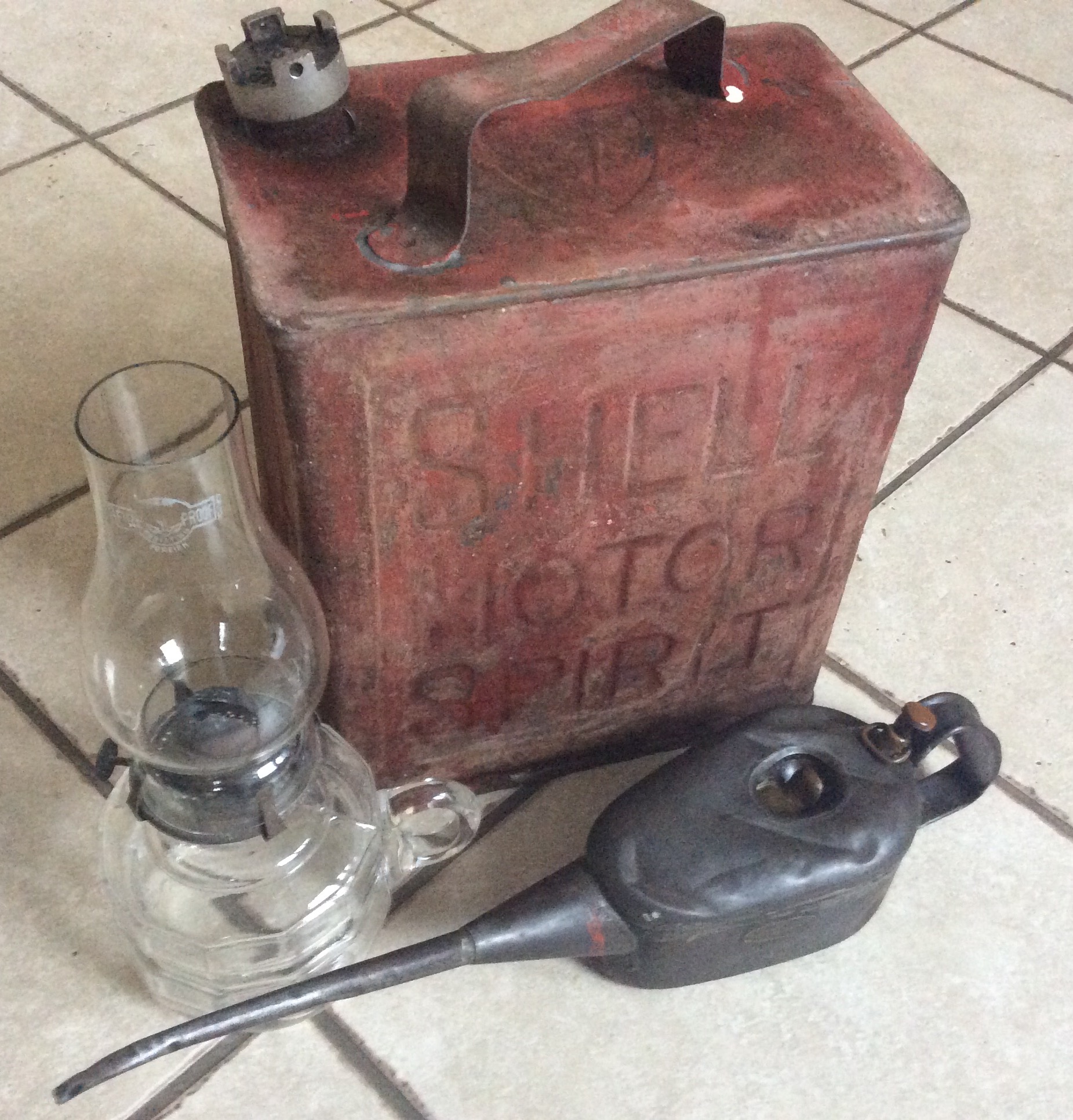 You may have noticed that I love coming across old things, once in regular use, that have a story to tell. First up I trawled through my own garage where I found a portable oil lamp that my dad kept ready primed over the years and I guess he kept it, not just because it was useful in a power cut, but because as a boy he would have used it to ‘light himself to bed’ – now there’s an expression we no longer use. I have an old Shell petrol can from my grandad’s first car in 1927 and used later for keeping the lawn mower topped up with petrol, plus a lovely old oil can. I cannot quite believe I am describing an old oil can as ‘lovely’ but l suspect it is because looking at something like this and holding it in my hands I can only think that it is impossible not to be moved by the thoughts of the hands that have held and used it in the past. 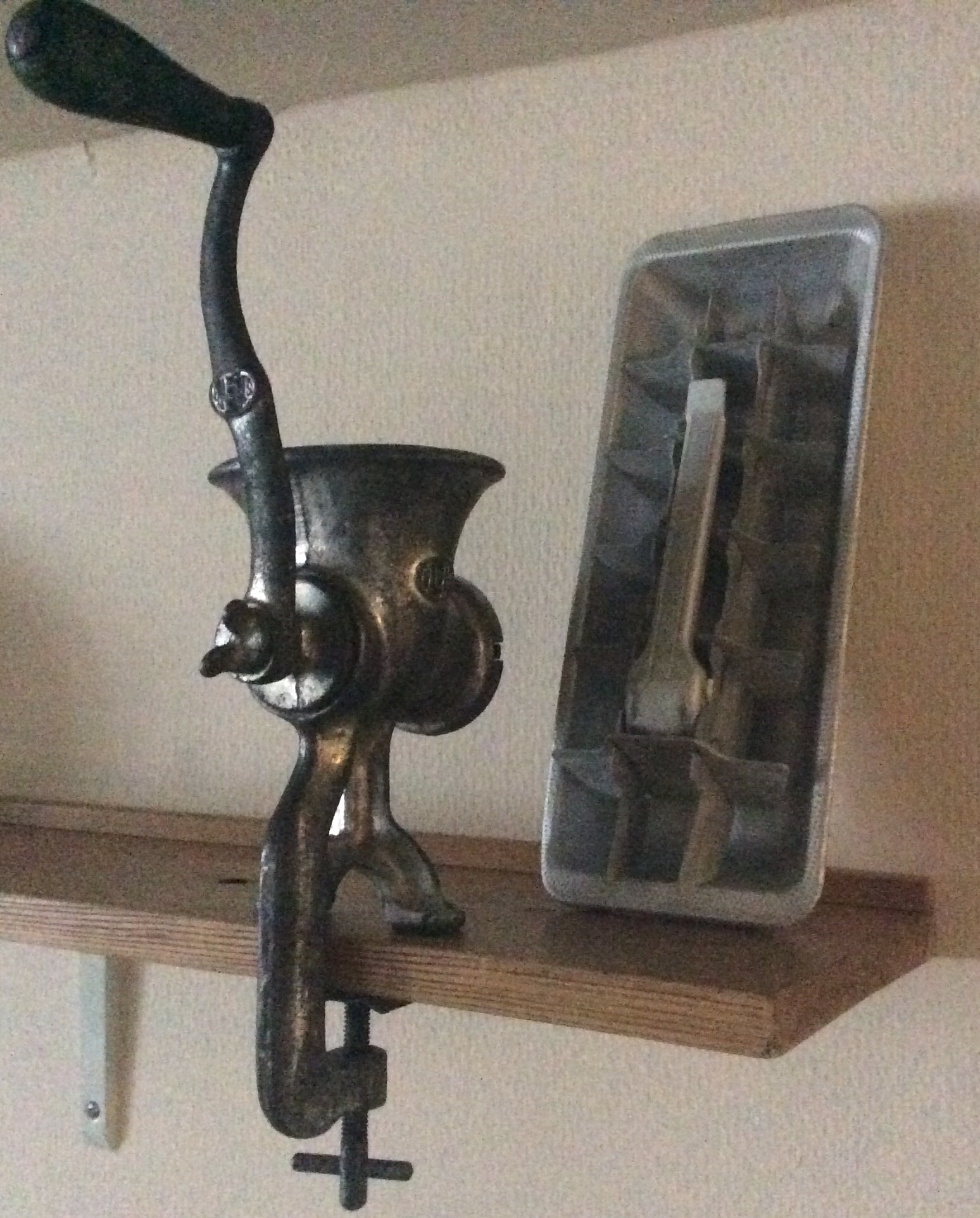 I was able to look through the unsaleable metal items waiting to be taken away, by the metal recycler, at the back of one of the local charity shops and I found a Spong mincer. There are many who will remember the days of the Sunday roast with ‘cold on Mondays’ and cottage pie on Tuesdays, courtesy of the family mincer. Out it would come and be bolted to the table and the remains of the Sunday roast were minced to make cottage pie or tasty rissoles. Nothing was ever wasted and a good-sized piece of meat could last a family of four at least three days. My favourite was always the cold roast meat on Mondays with mashed potatoes, beetroot and Branston pickle. ‘Cold on Mondays’ was because traditionally Monday was washing day so time could be saved by not having to do too much cooking. I also found an old metal ice cube tray. This is exactly what the first ice trays were like that came with the early refrigerators and before plastic took over. It was a great reminder to me and I hope it will be to others.

Eileen, one of the volunteers at the centre, then took my quest into another league entirely when she turned up with three fabulous small items used in the kitchen. The first, and my very favourite item of all so far, is a clever piece of design and craftsmanship and is a cherry stoner, or pitter. It sits so well in the hand and cries out to be tested but cherries are not in season so we will have to wait. 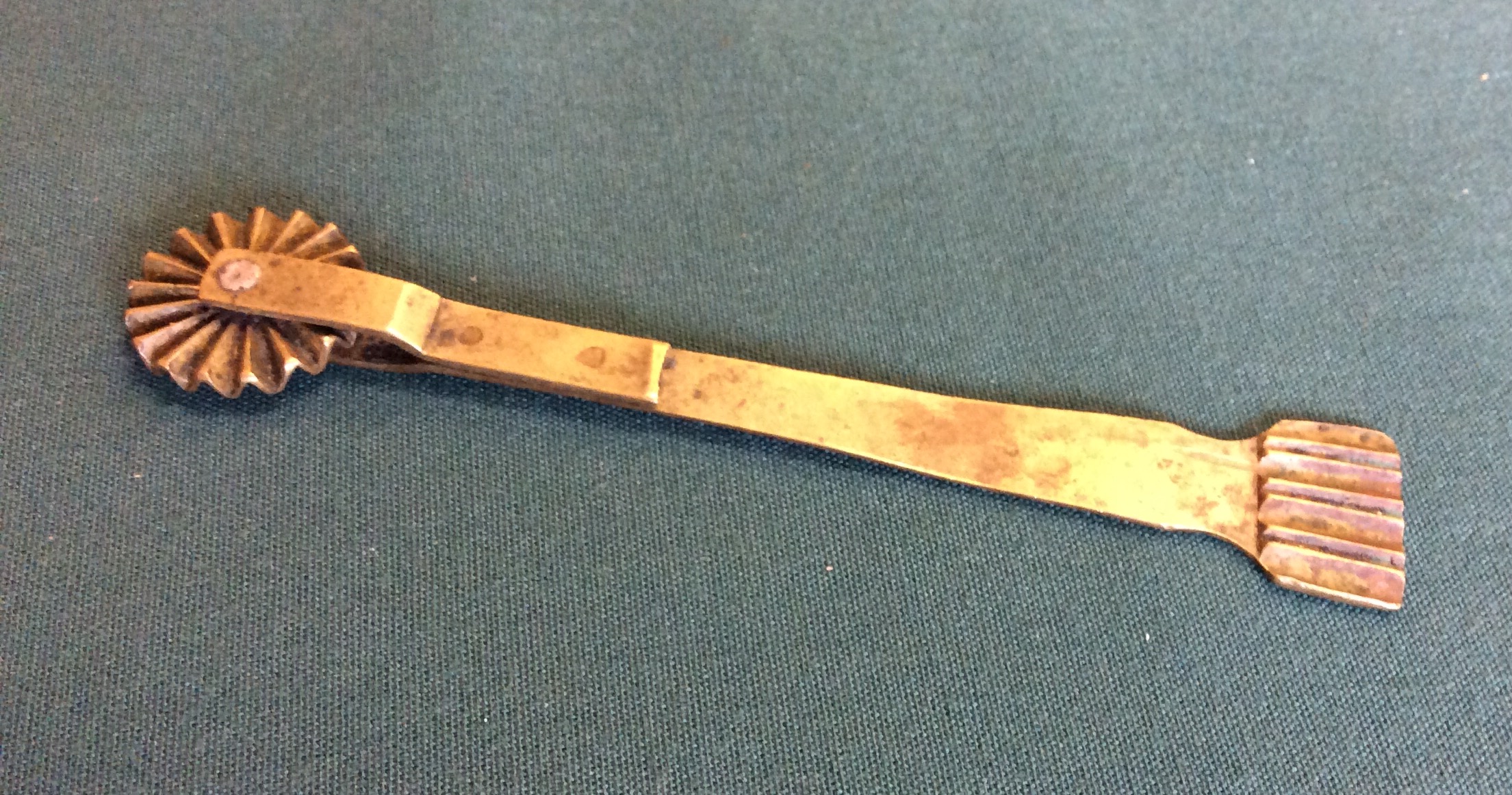 Second up is a brass pastry wheel with a crimper at the end. This one caused much hilarity amongst the small group of us examining it when I found one recently sold on eBay to which there was an immediate chorus of ‘how much?’ – and I said ‘£39’ to which they all responded as one ‘THIRTY NINE POUNDS?!’. We all looked again at the pastry wheel with new-found respect.

Last but very probably not least of Eileen’s treasures is a game skewer. We knew nothing of silver marks between us but I have photographed the marks and here they are. Does Eileen have a solid silver game skewer or does she have a silver-plated version? Can anyone help with the silver marks? Now we are on the look-out for a little wall cabinet to show off these smaller treasures and in view of the value placed on some of these everyday items we had better ensure it is lockable!

Do you have any ‘family treasures’ that tell a story? Please do share them with us.