Old yet ever Young 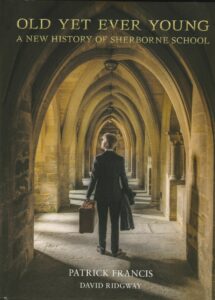 We have been presented with a magnificent new book for our library in Yeovil – Old Yet Ever Young – A New History of Sherborne School by Patrick Francis and David Ridgway. Those of us who live in Sherborne often see the boys going about their daily lives as they walk from one part of the school to another. We are invited to attend special events, such as the regular plays that are staged by the school together with Sherborne Girls’ and Leweston School and the town is sometimes full of the parents as they come together for special school events. The school is very much an integral part of the everyday life of the town and, as a society, we have worked with the school archivist on such projects as the Sherborne Pageant of 1905.

Before the book is passed to Paul Radford, editor of the Greenwood Tree for a review in the next edition, I have been able to take a peek inside and what a treat as here is an opportunity to open a door into the world of the school we live alongside.

Patrick Francis, who taught history at the school for forty years, has painstakingly researched the text, and David Ridgway’s wonderful present day photographs are scattered throughout the book along with the many historic photos. David, who has taught biology at the school since 1990 and was head of biology for seventeen years, has taken many distinctive photographs of distinguished Old Shirburnians.

The book begins in 1850 with an introduction to Hugo Daniel Harper, the headmaster, who transformed ‘a small provincial grammar school which had fallen on hard times into a “public school” with a burgeoning national reputation’. By the end of the book the school enters the 21st Century. Along the way we meet very many people who have contributed to the life and times of the school, and I was most surprised to find the memories of my second cousin Richard Hill Brown, a ‘bursary boy’ in the 1950s. Richard was previously at Swanage Grammar School, and he remembers what it was like to come to Sherborne: ‘At first I was excited and home-sick in equal measure.’ He also recalls the bathing arrangements: ‘The bathrooms had open drains around the walls and we stood on duckboards as water gushed from the basins or cascaded over the sides of the baths, each filled each night for the cold bath ritual of the morning’. Richard also remembers that the constant opening of the door to the outside removed any benefit from the central heating pipes. There were a few chairs near the coke stoves, apparently, and I can imagine that these might be popular and were likely taken before the fixed tables and benches where most of the boys’ work was done.

One of Richard’s contemporaries at Sherborne was Stanley Johnson, the father of Boris. He remembers being dropped off on his first day by his father, a gruff sheep farmer from Exmoor. He states ‘As we drew up outside, he didn’t turn the Jeep’s engine off. But he took his pipe out of his mouth long enough to say a brief “Good luck old boy” and then he was gone, the Jeep backfiring as it went down the hill’.

This is a very welcome addition to our library, and I sincerely hope that some of you will have the opportunity, as I have had, to leaf through its pages in the fullness of time.

16 December 2020
My grandfather, William Henry Woods known as Woody was a houseman at the boarding house Abbeylands for 49 years, he was appointed in 1922 by Mr Elderton. He loved the School.  I can remember going into the school in the summer holidays when we were down on holiday. He was actually born in the Wincanton Workhouse in 1898. The family moved to Silverlake in early 20th century to work as ab labs. I loved my grandfather and I love Sherborne.
— Peter Burrage

Rachel Hassall, Sherborne School Archivist, has located a memory of Woody in the School Archives website written by Elderton’s daughter, Mary Watkins, (the section is underneath the photograph entitled ‘Hall (prep) at Abbeylands, July 1921’) https://oldshirburnian.org.uk/memories-of-abbeylands-1919-1966-by-mary-watkins-nee-elderton/