Reflections on a Family History Journey

In spring this year Kerri Curtis made the long journey from Tasmania to the south-west of England, tracing the history of her family back to villages in Somerset and Dorset.

It was my mother who inspired in me an avid interest in our family history. When I was a child, she told me stories about her father’s migration to Australia from Wales in the 1920s. The rest of his family – mother, father, sister and brothers, had followed a few years later, settling in a small country town in New South Wales – Portland, near Lithgow – just on the other side of the Blue Mountains.   This is where he met and married my grandmother, and where my mother was born in 1928. During the depression, the family was forced to move to Sydney to find work. 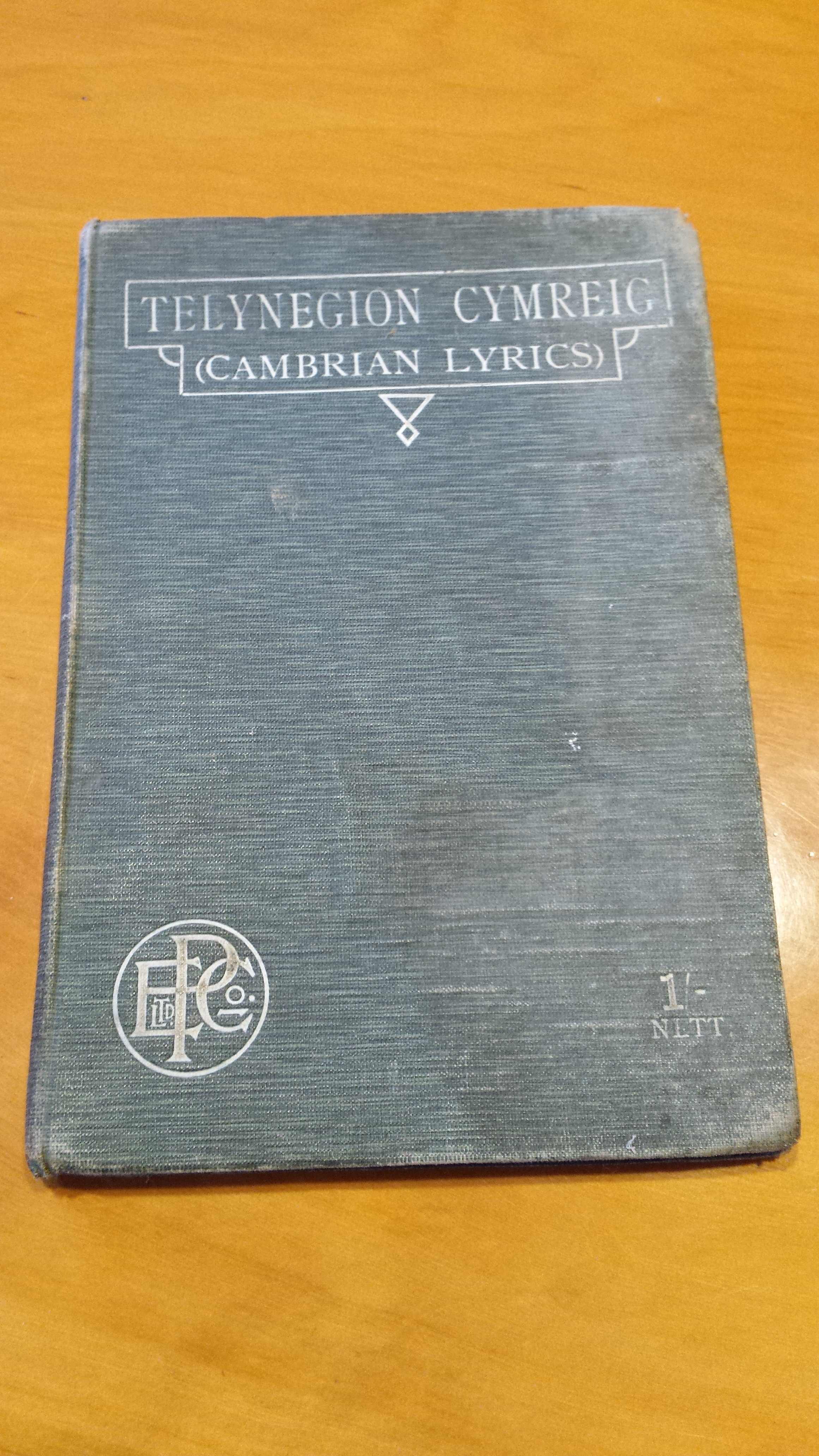 I was born in Sydney, and I recall trips to Portland with my parents and brother, to visit various aunts and uncles. I loved these visits – the small country town was very quiet and quaint and nobody locked their doors when they went out – coming from the city, this seemed very strange indeed!   The houses were small workers’ cottages because the town’s main employer was a cement works. They were usually squat, symmetrical little “bungalows”, with perhaps two rooms on either side of a central hallway, and a verandah at the front sheltered by a bull-nose roof. And I loved the rocking chair in Aunty Thelma’s living room! She gave me a Welsh language poetry book on one of these visits which was a school book used in Aberdare in South Wales by my grandfather and his younger brother. It had their last address in Wales written in it and I so wanted to go and see it when I grew up!

My grandfather, Edward Percy Williams (always known as Bert – but that’s another story!) was born in Penarth, Glamorgan in South Wales, in 1899. When he was a lad, he wanted to “work down the pits” like his father. His school teacher begged the family to keep him at school because he was a bright and intelligent pupil, but the lure of earning a wage was too much for him! My mother told me that Bert’s father was from Somerset, and that his mother (Louisa) was born in London, the illegitimate daughter of Tamar Ellen Ann Cridland.

As Tamar later married and lived in South Wales, we really had no idea that she was from anywhere but Wales. In short, we thought we were mostly Welsh! Well, how wrong could we be! With the advent of sites like Ancestry and Findmypast, the family research world has revealed our ancestors’ stories of hardship, resourcefulness and adventure. I still marvel at the thought of my grandfather and all his family – parents in their 50s, and other adult children, leaving the old country behind and travelling for weeks by steamship to the other side of the world! None of them ever returned to the land of their birth.

In 2009, I began research in earnest on Ancestry, and found the connection to Somerset – a village charmingly called Haselbury Plucknett – near Yeovil. This is where Bert’s father (Robert Joseph Williams – 1869-1939) and his family came from and lived for several generations.

At the same time, I discovered that Tamar Ellen Ann Cridland (1850-1909) was born in Dorset – Bradford Abbas, to be exact – just a short distance away from Haselbury Plucknett!

Tamar’s mother was Maria Cridland – nee Bragg (1821-1857) whose husband, John Cridland died in 1844, leaving Maria with two young children and another on the way. Tamar was born in 1850, six years after John’s untimely death, and no father is named on her birth certificate. A Bastardy Claim by Maria Cridland was rejected in December 1850, which meant that the father was, frustratingly, not named again! Poor Maria must have had great difficulty in dealing with these events, because she died at the age of 36, leaving Tamar an orphan, aged just 7. In the 1861 census, I found 12 year old Tamar living in North Petherton, employed as a domestic servant. 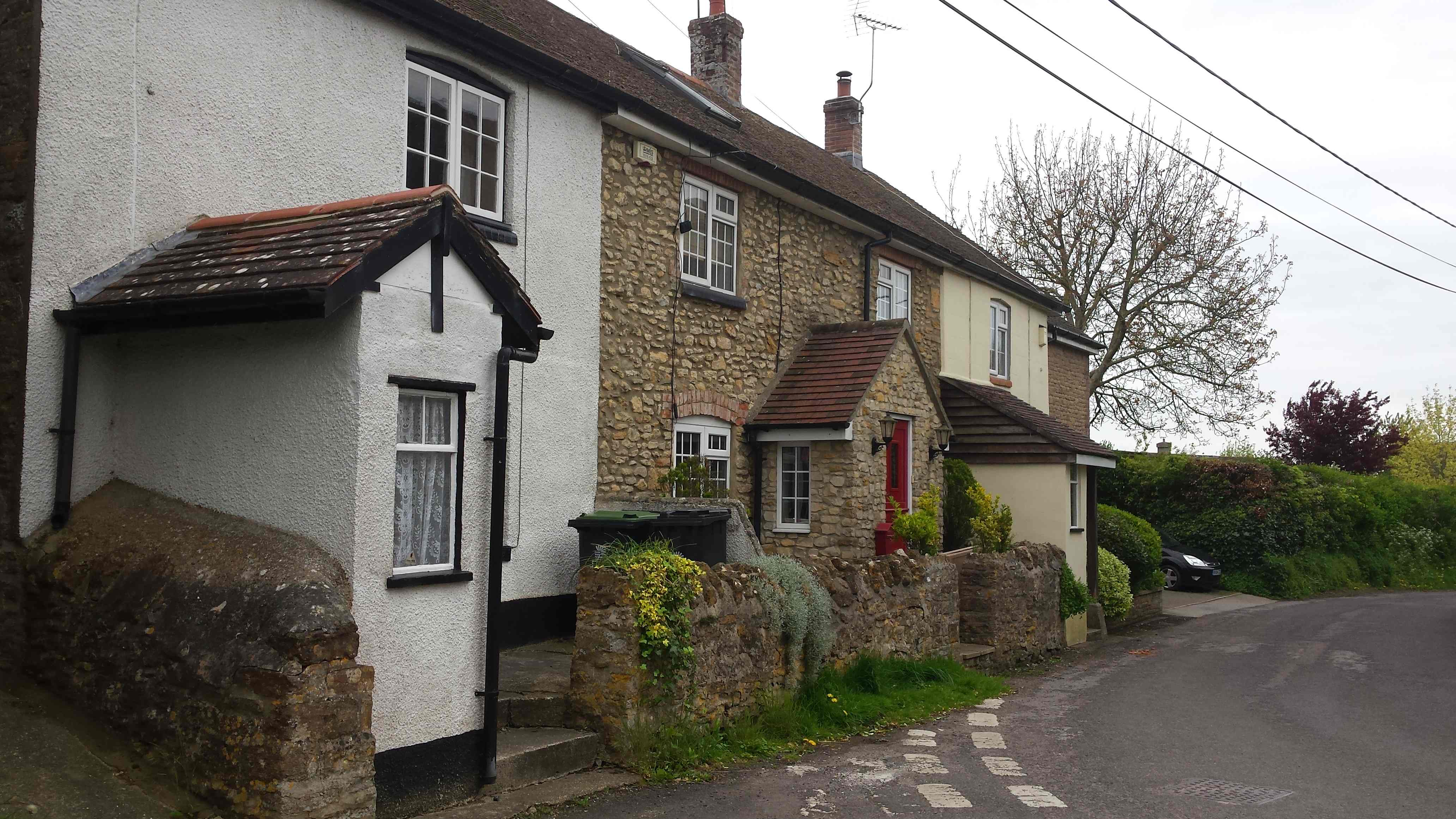 Cottages in Bradford Abbas where Maria lived with her children as well as her mother and brother in 1851.

As I researched the family a little more, I found more of my ancestors – Braggs, Garretts, Whites, Arnolds and Punfolds had actually lived in this little village of Bradford Abbas for several hundred years!

As an Australian, I have often longed for the “connection” to a place – somewhere that I could feel as though I really belonged. The Australian aborigines have that sense of place, of being a part of the land, because they really are – they have lived on this wide brown land for more than 40,000 years! Because of the nature of British and European migration to Australia over the last two hundred years, and also because I have lived in a number of different places in Australia (Sydney; Camden, south west of Sydney; Lismore on the far north coast of NSW; Orange in the central west of NSW; Canberra, the nation’s capital city, and now Tasmania), I have never felt as though I really belonged anywhere in particular.

To discover that MY family had lived in Bradford Abbas for so long, was exciting and enticing, and I wanted to see it and “feel” their presence, and to walk the same lanes and paths that they walked. So, I convinced my eternally patient and gentle husband to go with me to visit this little Dorset village. We booked a cottage for three glorious weeks and took the long long journey to my ancestors’ past.

Our very kind hosts – the owners of Apple Trees cottage, put us in touch with Tony White, a historian with a great interest in and knowledge about Bradford Abbas. Tony emailed me and asked for some information about my family so that he could tailor a walk around the village to my family interests. I duly gave him a list of people and their stories and then met him when we arrived in the village. He had an interesting revelation to make about Maria. He had been conducting his own research about her because he had found a newspaper article dated 1844, in which John Cridland, who had been working on a weir at Newton’s Farm near Yeovil, jumped in to save the bailiff who had fallen in, and they had both drowned.  Maria was left (as mentioned before) widowed with two small children and she was about one month pregnant.

Although the Census returns did not show any addresses, Tony had researched the Census taker’s route, and was able to show me which houses Maria and John had probably lived in.   What a joy it was to walk the narrow lanes of this beautiful little village and to learn more about how their lives would have been.

The ancient church of St Mary the Virgin welcomed us and I entered its comforting interior several times in that three weeks (including attendance at a delightful musical evening with the “Wandering Winds” on their “World Tour of Dorset”). 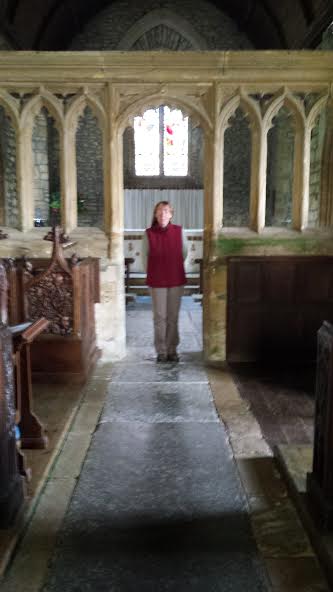 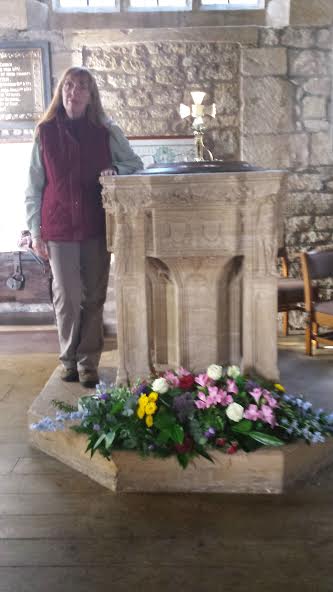 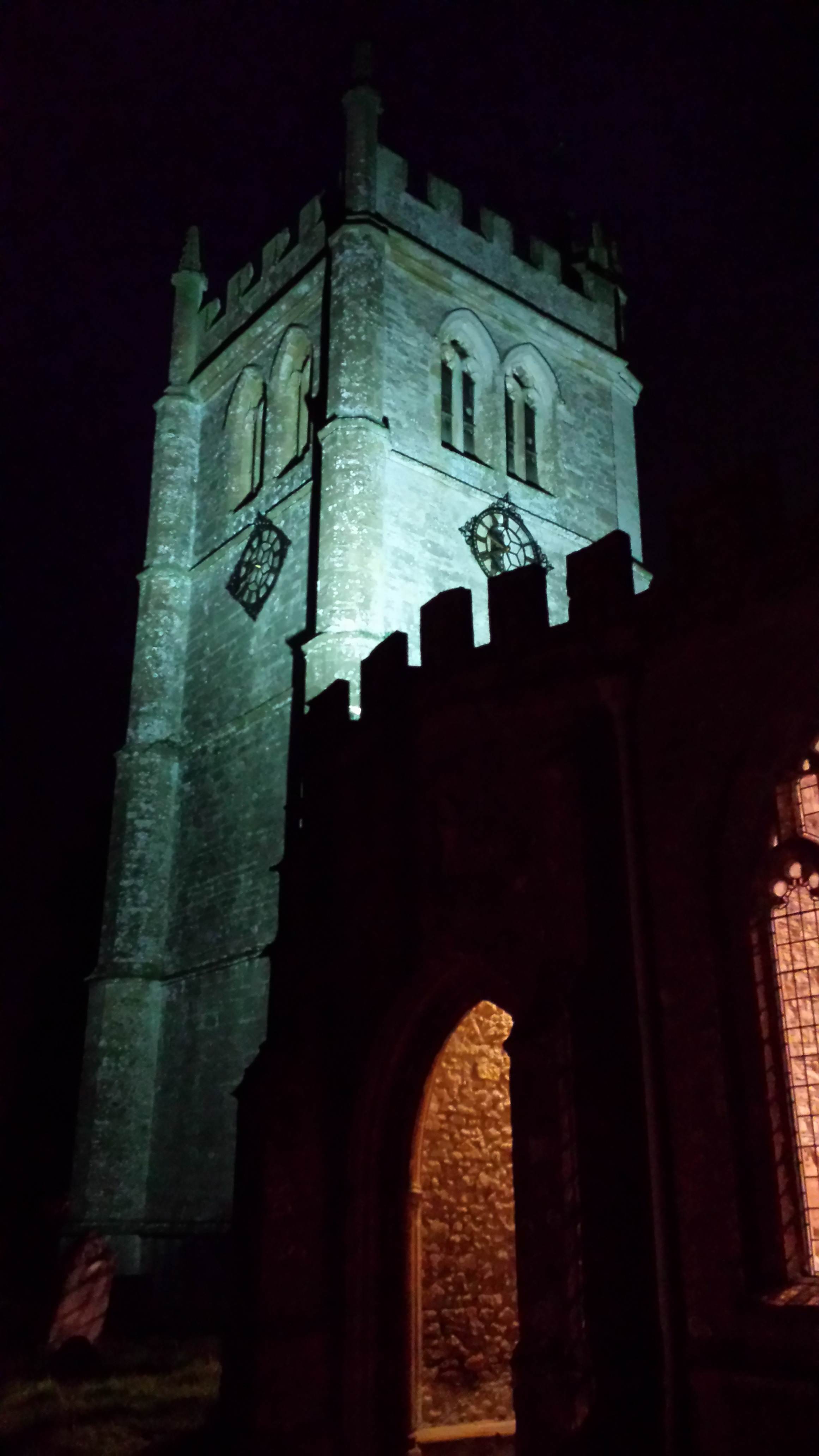 Inside the Church of St Mary the Virgin, Bradford Abbas, and the Church tower at night.

To touch the font that my ancestors were baptised in; to walk down the aisle as they would have done on their wedding days, and to wander around the churchyard where they were buried (unmarked graves sadly), gave me something of the sense of place that I was seeking. Some of the names on gravestones were family names, although the connections are still waiting for me to discover! 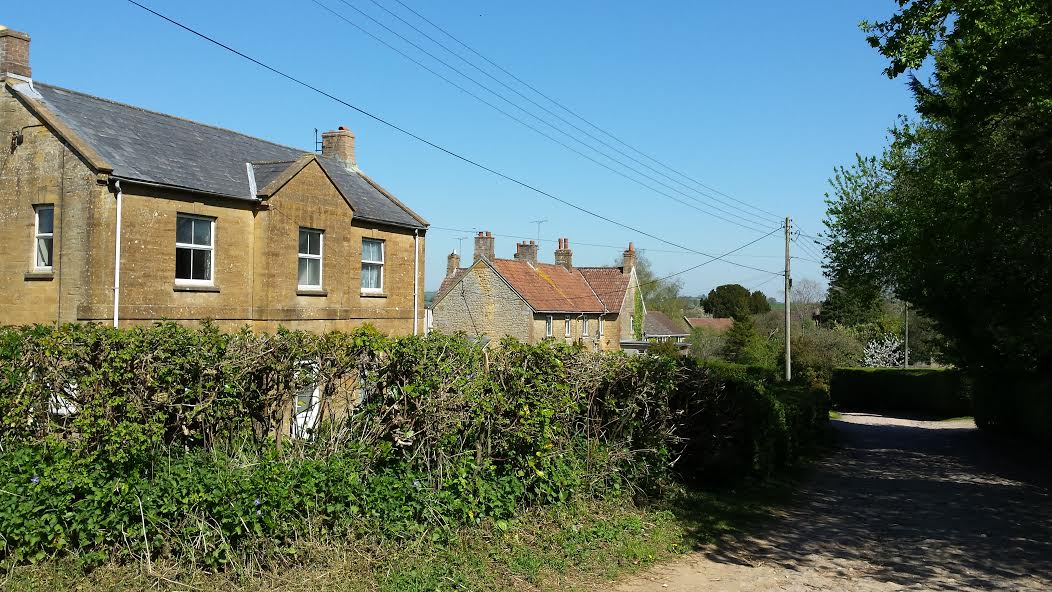 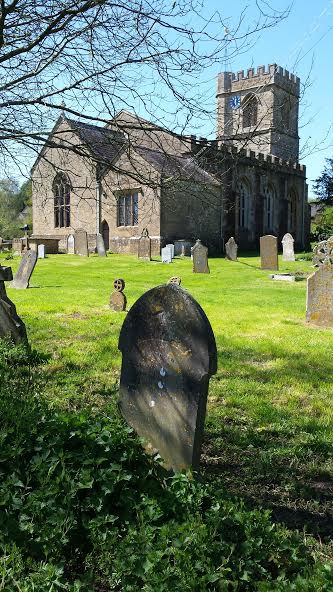 Church of St Michael and All Angels, Haselbury Plucknett.

Haselbury Plucknett was, of course, an essential destination as well. We spent a very pleasant day walking the quiet streets of this little village and having lunch in the White Horse Inn. As it turned out, this side of the family also had lived in various locations in Haselbury for several hundred years! The Welsh connection was tenuous to say the least, although as Williams is a Welsh name, perhaps “migration” backwards and forwards had happened in the long distant past. Joseph Williams (1840-1930) married Mary Rendell (Rendall) – a recurring name in Haselbury’s past, along with other family names such as Chant (Chaunt), Brown, Raindall (Randal), and Burnett.

The church of St Michael and All Angels, Haselbury Plucknett, also embraced me in my desire to visit the sites of baptisms, marriages and burials; and Church Lane looked much as it must have done in the 19th century. 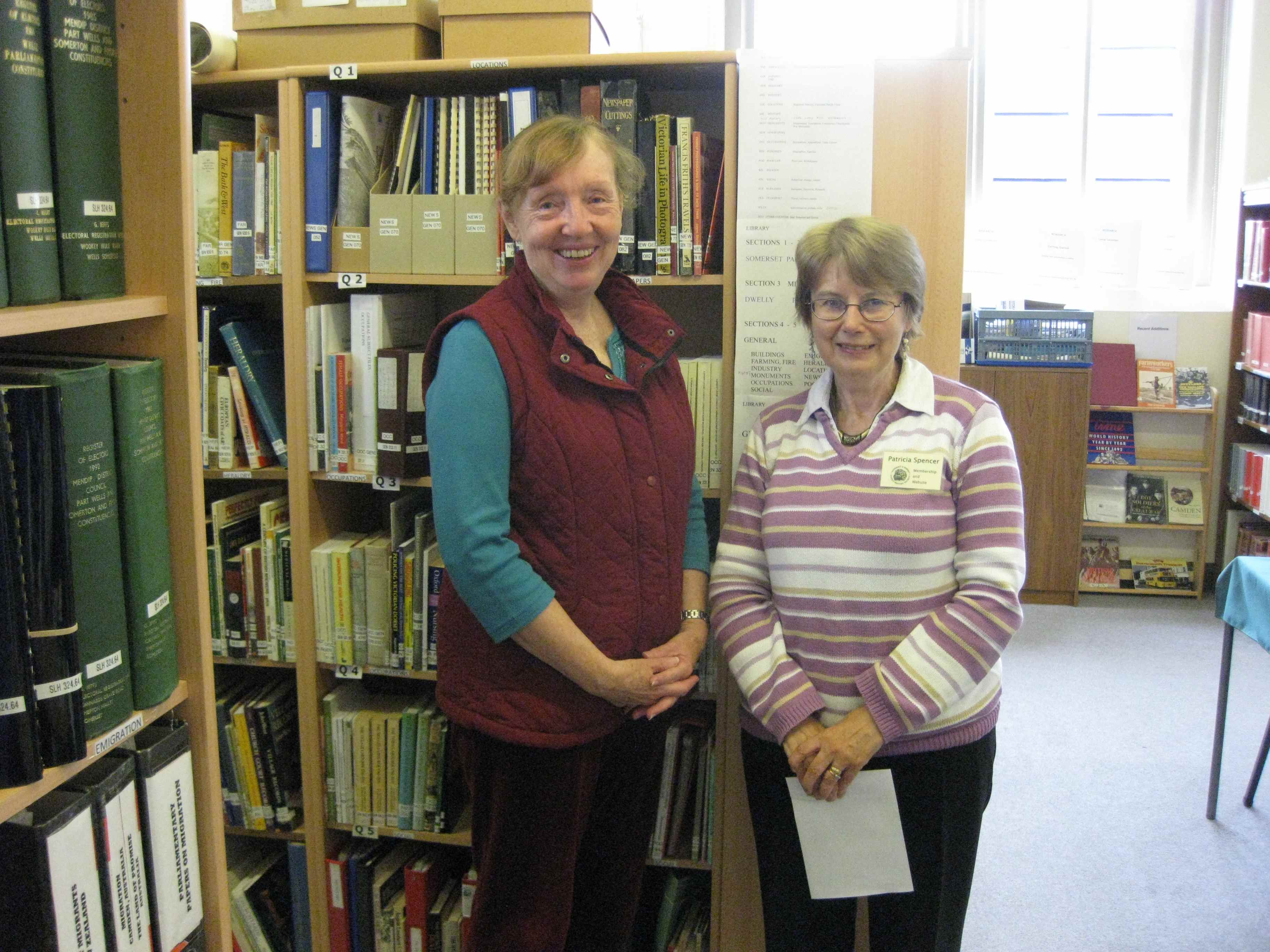 With Patricia Spencer in the SDFHS Family History Centre at Sherborne.

A couple of visits to the Somerset and Dorset Family History Society (SDFHS) rooms in Sherborne, introduced me to the wonders and convenience of truly “local” research and to the lovely people who volunteer there.

And my long held desire to visit the last house that my grandfather lived in before moving from Aberdare to Australia, was fulfilled at last….. along with the three other addresses he had lived in during his first 23 years!

And now, I am back home in Tasmania, reflecting on how wonderful it was to get to know some of my ancestors through the places that they had lived out their lives. I will continue my research on line and through my membership of the SDFHS and I know that I will gradually uncover more information, but now I have a three dimensional memory of these two little villages, so closely situated to each other and so entwined in the story of my family. 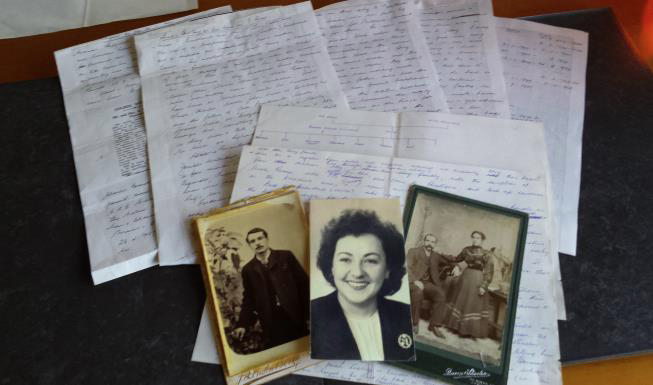 My mother, Esme (centre) with her notes as well as photos of Robert Joseph Williams, and Tamar with her husband.

My mother (Esme) died in 1998, leaving me with her handwritten notes on all that she knew about the family – a wonderful basis for me to begin my research. How she would have loved to know the stories that have been uncovered! And how she would also have loved to feel the same “sense of place” that I have had the good fortune to be able to experience.