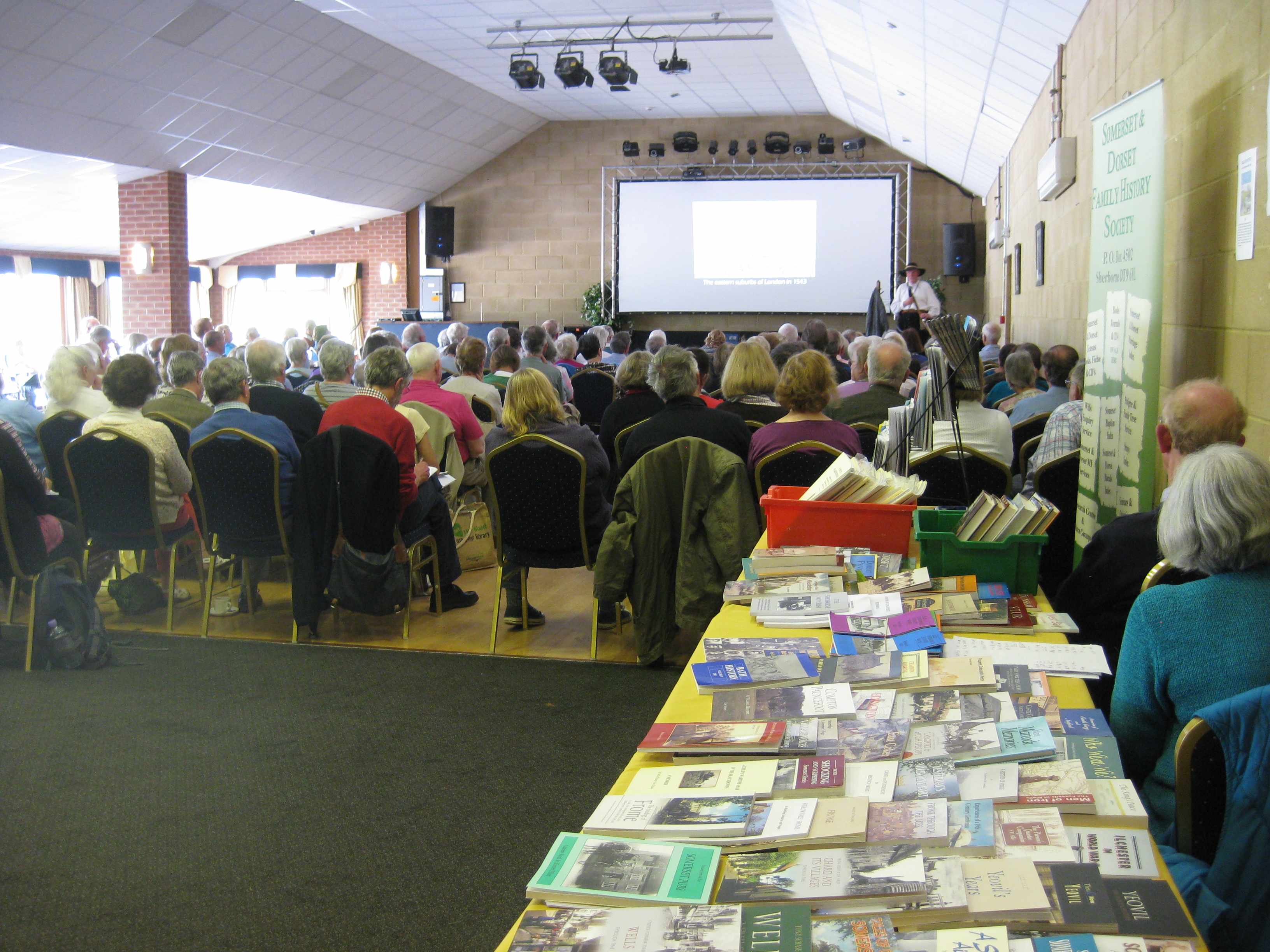 Arriving at the Oaktree Arena at Highbridge on Saturday 21 September there was a real buzz about. Organised by the SDFHS Sedgemoor Group team, led by Christopher Deane and Lin Hoddinott, and held in a spacious family run venue the scene was set for my first AGM. What a day it turned out to be. Up first was Nick Barratt on the ‘Future of Family History’. His talk was stimulating to say the least and he included mention of the way in which our society can adapt to and use benefits from the changes that are occurring in the way technology and social media are affecting family history. He asked for a show of hands of Facebook users and a few put their hands up but there appeared to be only two Twitter users one of whom was our new Membership Secretary, Patricia Spencer, who was ‘tweeting’ from the hall as Nick spoke. What an appropriate question to have asked as the Society only that very week had set up Facebook (www.facebook.com/SomersetDorsetFHS) and Twitter @TheSDFHS accounts. In his summary, he placed emphasis on understanding and using technology; on education; and on tourism, which at one point he called “ancestral tourism”. He felt that FH societies should relate directly with their members and the public, and not go through third parties; we must think strategically about what to do with our data and not sell it to Ancestry, but find a way to make it part of the membership package.

Nick Barratt’s talk: not the show of hands for members using Twitter!

During the business of the day retiring treasurer, John Marshall gave out some painful facts about the financial situation but these were offset, to some degree, by Chairman Ann-Marie Wilkinson’s plans for future activities to help raise the profile of the Society together with its income. 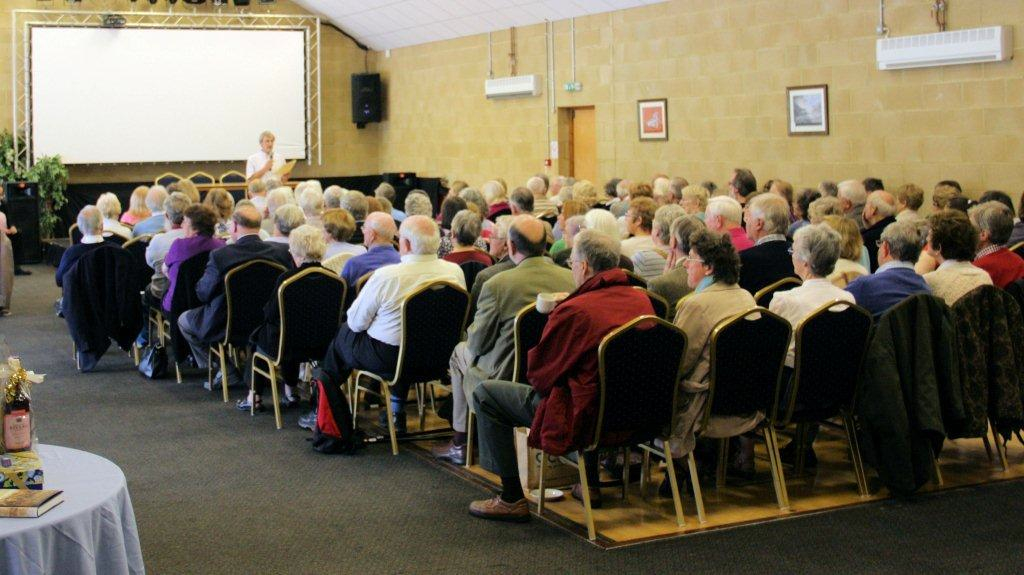 The Chairman of the Sedgmoor Group, Christopher Deane, welcoming members. 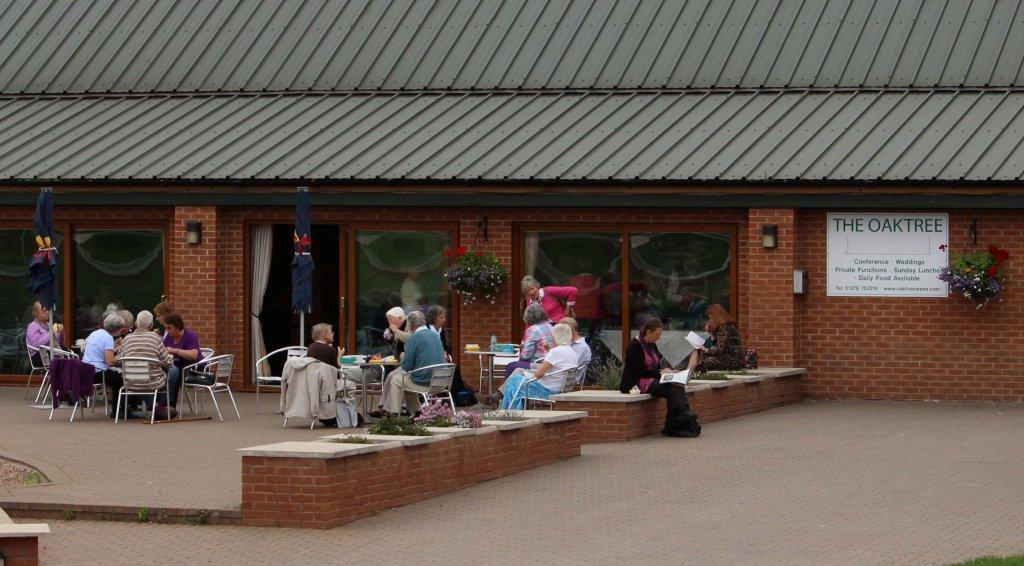 During the lunch break.

David Sebborn in costume as his ancestor Benjamin Blake

After a convivial lunch, with many sitting outside, it was David Sebborn’s turn and he took us back to visit one of his 17th century ancestors. He arrived, after a long trek through time by way originally of Somerset and latterly Charleston, Carolina to share his memories. His story was not only fascinating but the way in which he related it was too. He referred to something he called ‘informed creativity’ which he was going to tell us more about but time did not allow. I think what he was getting at was if you get all your facts lined up about someone you then have a number of options open. David, who dressed for the part as his ancestor, Benjamin Blake, has turned his research into an entertaining and informative monologue.

Next up was Janet Few. Janet has appeared at many a meeting and AGM, I gather, but this was the first time I had seen her in action. What a performer! Much statistical information and research had been put together to paint a verbal picture of how our ancestors lived in 1851 which she interpreted for us with wit and humour.

She also introduced me, and many others I think, to the Society for One Place Studies http://www.one-place-studies.org. Here was another message that tied in with some of the things Nick Barratt told us at the beginning and is an interesting area for the future that clearly has possibilities for members of our society to explore.

Lin Hoddinott said there were 134 of us attending which included 20 non members. Next year it will be South Dorset Group’s turn to organise the AGM at Weymouth (Saturday 20 September 2014) and Jennie McGowan remarked that they have a hard act to follow but I have every confidence that they will and look forward to attending again next year. Will more of us be ‘social networking’ by then? – let us wait and see!