‘The Bishop, the Devil and the Boot’ – Katherine Barker’s reading of Sherborne Museum’s medieval wall painting 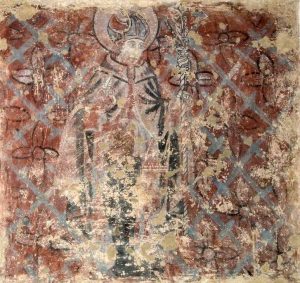 Early in March, the SDFHS Research Centre hosted a talk by Katherine Barker for the Sherborne Museum Association on a medieval wall painting discovered in 1962 during renovations to a house in Sherborne. Katherine has very kindly enlarged on her original note describing the talk, to enable us to provide a more thorough record of her investigations: –

The house was ‘Tudor Rose’ in Long Street and the painting, found during the removal of what was discovered to be a heavily papered-over medieval partition wall, was the only one of six surviving wall panels to show a human figure – a bishop raising his hand in blessing. Dr Clive Rouse dated the painting to about 1500, although he could not identify the bishop; but it was not until 1977 that a previously overlooked, badly-abraded, part of the painting was seen by Nicholas Cooper to portray a tall boot standing in front of the bishop, from the top of which peered the figure of a beady-eyed devil. 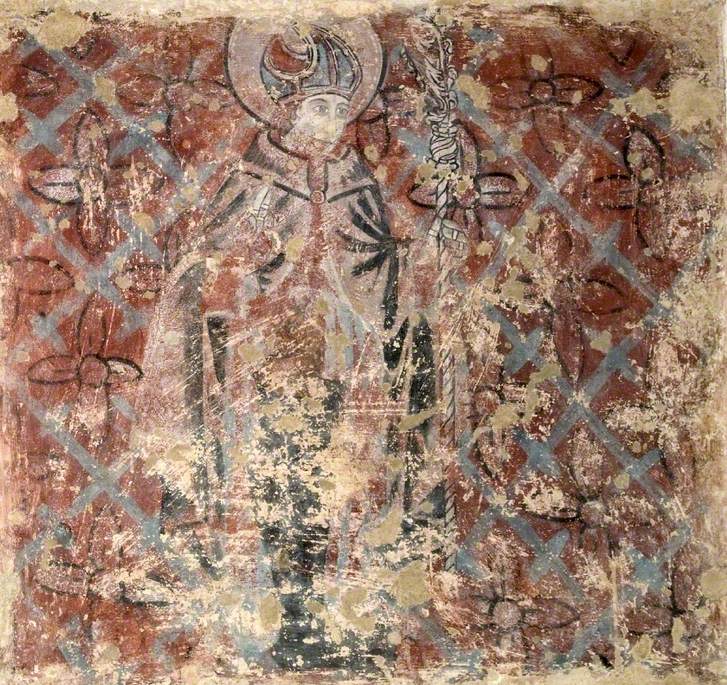 The boot and the devil enabled Nicholas Cooper to associate the bishop with St John Shorn (also Shorne or Schorne) whose medieval claim-to-fame was the conjuring of a devil into a boot.  But Shorn was never a saint, nor even a bishop, he was rector of North Marston in Buckinghamshire. This not only raised the question as to the identity of the bishop, but also as to why this image should be found in Sherborne; and further, as to why this should be the only known image of Shorn in which he is not holding the boot. We may be sure that a carefully-coloured medieval wall painting of this character had a story to tell – this is a work which will have been formally commissioned. Medieval wall paintings are rare survivals, usually succumbing to changes in taste if not to the ravages of time. Images of a popular religious nature were systematically destroyed during the Reformation. This was a work which merited further enquiry.

Resolving this ‘detective story’ became the focus of Katherine’s MA dissertation at UCL, and the conclusions she came to have been recently confirmed by a researcher at the Ashmolean, Arthur MacGregor.

Cults often grew up around saints for their healing powers and although Shorn was never formally canonised he had a strong local following, since he was said to provide relief from gout, from toothache and various other ailments. Shorn had become rector of North Marston in 1290, remaining there until his death in 1314, and where his fame was based on his ability to ‘conjure’ the devil into a boot. The devil represented evil – pain – made visible. And in ‘conjuring’ away the devil Shorn’s blessing was to include the tangible ‘despatch’ of the force held responsible for the suffering.

When Shorn died, his church at North Marston became a popular place of pilgrimage – revered as a saint his relics were to attract both large crowds and a complementary income. North Marston was to become a prosperous place, where pilgrims could purchase small lead badges showing John Shorn as priest holding in his arm a boot with the devil’s head appearing at the top; over 50 survive in various collections.

More than 150 years later, the Wars of the Roses came to an end with Edward IV’s victory at Tewkesbury in 1471, enabling Edward to turn his mind, amongst other things, to funding the enlargement and decoration of St George’s Chapel in Windsor Castle, which he intended to be a grand monument to the Order of the Garter. King Edward made Richard Beauchamp (Bishop of Salisbury, 1450-1481) Master and Surveyor of the ‘works to be newly constructed’, and it was Beauchamp as Dean of Windsor who – appraised of Shorn’s ‘pulling power’ – obtained a Bull from Pope Sixtus IV authorising the removal of the relics from North Marston to the new Chapel.

So, bringing these threads together, Katherine linked Beauchamp with Shorn and was able to identify Beauchamp as the bishop shown in the painting. Although the bishopric was removed to Sarum in 1075, Sherborne was to remain an important part of the Salisbury diocese; the focus of a large ecclesiastical estate.  Bishop Richard Beauchamp would have been well-known locally, as would his leading role in the supervision of the removal of John Shorn’s relics from North Marston to Windsor. ‘Tudor Rose’ could well have been built as an inn (it was originally included with ‘St Johns’ next door, which has since been re-built) for the reception of travellers and pilgrims, and so a most suitable place to depict the Bishop blessing Shorn’s devil-in-a-boot – an image which takes pride-of-place. (He was not, of course, holding the boot). These were the years which also saw the great re-building of the Abbey culminating in the completion of the fan vault we know today; a very busy period in Sherborne’s history.

The painting was bequeathed to SherborneMuseum by Mrs Phyllis Strahan in 1991 and has been on display since that time. It was formally ‘unveiled’ by the then Assistant Bishop of Salisbury, the Rt Rev John Cavell, in the October of that year.

As a footnote to the above, it was not unknown for medieval statues to be animated through the use of internal levers, so it is possible that Shorn used something similar to enable the devil to pop in and out of the boot. A large wooden image of Shorn was once to be found at North Marston – removed on the orders of Thomas Cromwell in 1538. Known today as ‘automata’, their role has probably been underestimated; medieval preaching could certainly be as colourful as anything in the fair ground. And no one knows of course how far back this practice might go – Shorn may have (re-)employed a one-time essentially pagan device in a Christian context. It has been suggested that with his devil-in-a-boot, we have the forerunner of the ‘Jack in a Box’ toy – still popular toys even to this day.

(1) Katherine Barker, ‘The Curation of a Medieval Wall Painting in Sherborne Museum, Dorset’ – Dissertation submitted for the Degree of MA in Museum Studies, University College London, Institute of Archaeology, 1992.