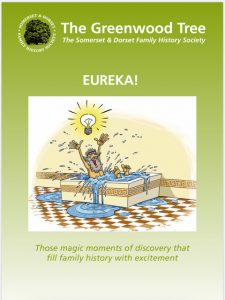 The Eureka moments that produce sudden and unexpected breakthroughs in your family history research provide the theme for the December edition of The Greenwood Tree. Editor Paul Radford previews the edition which will be mailed to members shortly and which SDFHS members can already view or download from the Members Area of the Society’s website.

The front cover harks back to the Greek inventor Archimedes who is said to have exclaimed ‘Eureka’, an ancient Greek word meaning ‘I have found it’ when taking a bath. His observation of the displacement of water caused by his body’s immersion in the bath led him to an important discovery on measuring the volume of irregular objects, the original ‘light bulb’ moment.

Margery Hookings, a Somerset-born and Dorset-based journalist, had the most unexpected of Eureka moments when she discovered she was related to the celebrated American writer Ernest Hemingway. That came out of the blue when she received a Facebook message from a previously unknown distant cousin in Canada who happened to have read a blog post she had written about her grandfather.

Jennifer Swainston had a very different light bulb moment. Hers came when she was combing through BMD records and came across a sudden death in the Portland prison bakehouse.  The deceased baker Henry King turned out to be the hitherto unknown father of her great-grandfather Henry King Comben, who had been born out of wedlock with an unnamed father. Jennifer tells the story in her article entitled ‘We Could Have Been Kings’.

The editor’s own Eureka moment, told in ‘The Day My Blood Ran Cold’, recalls the discovery that one of his ancestors had been hanged in Ilchester Gaol for stealing a flock of sheep.

John Callcut tells the fascinating story of an inherited gold watch from a Captain Hawkins. His research led him on the trail of a trunk of family belongings sent across the Atlantic and ending up in Prince Edward Island. The trail revealed a family link to Watson Duchemin, a musician, composer and inventive genius who also built an old pipe organ.

These are among several other stories of members’ breakthrough discoveries but there are plenty of other treats in store in the December edition, some of them real-life horror stories. ‘The Hanging of Sarah Freeman’ by Martin Baggoley recounts the story of a Somerset woman who went to the gallows for poisoning her brother with arsenic. Though not convicted of further offences, the evidence pointed to her being a serial murderer of family members as her husband, son and mother all died in suspicious circumstances, consistent with poisoning, at around the same time.

One of the most terrible stories is based on research by volunteers at our Broadway House family history centre in Yeovil. They dug out a whole series of old newspaper reports which showed that tombs in the vaults of the parish church in the quiet village of Freshford were plundered wholesale for valuables and lead while renovation work was supposed to be taking place. Though the builder and his workmen and the church’s sexton were charged with the offences, it seems no one was ever convicted.

Elsewhere in the magazine, the Society’s newly elected chairman Rita Pettet introduces herself. Her predecessor Ann-Marie Wilkinson continues her diary of the progress of the DNA tests she and her husband recently undertook. The SDFHD Photographs Project shows picture of workers at one of the Doulting quarries in the Mendip Hills, the first from Somerset in our series which will alternate unidentified photos from either Dorset or Somerset.

Somerset is also the focus for our village spotlight feature, this time focusing on Ilchester.

The next edition in March next year will also have a theme. This time it will be on Grandmothers.