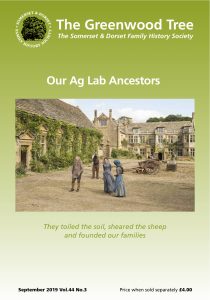 The September issue of The Greenwood Tree focuses on agricultural labourers, the ‘ag labs’ that so many of us have in our family trees, with stories on farming folk sent in by members. Editor Paul Radford previews the edition which will be mailed to members at the end of August and which SDFHS members can already view or download from the Members’ Area of the Society’s website.

The front cover shows a scene from the filming on the Mapperton Estate of the 2015 version of Far From the Madding Crowd when a realistic period set, and costumes to match, were brought in to illustrate Thomas Hardy’s great tale of rural life in Dorset.

It would have been hard to avoid reference to The Tolpuddle Martyrs, whose harsh fate revealed so much about what was happening in the countryside, in particular in Dorset, in the first part of the 19th century. Their brave protest against declining and impoverishing wages led the six men into exile but opened the eyes of so many and eventually paved the way for better conditions.

Janetta Condon delves into the notebook of Swyre schoolmaster Charles Barrett to reveal details of the working lives of the village’s ag labs and efforts to improve their conditions but does not shrink from the shady side of an existence in which smuggling and drunkenness were a standard feature.

The intriguing tale of the Somerset village of Donyatt, bought up by the county council to provide smallholdings for ex-servicemen after World War One, is told by Margery Hookings, whose two grandfathers were allocated adjoining tenancies. They were among more than 100 former soldiers with honourable service records who were settled in the village.

Most stories focus on the men who worked the fields but Bob Kelley tells the tale of ag lab widow Mary Kelley, whose husband died when she was in her 30s but who made her living with the help of one daughter for the next 45 years.

There are other topics too. Jane Browning looks into letters written home by Thomas White to his Somerset siblings from the sugar plantations of British Guiana in the first part of the 19th century. David Clammer takes on an unusual facet of war as he delves into what happened to the surprising number of wives who were allowed to accompany their soldier husbands on campaign.

There are two new features. Retiring SDFHS chairman Ann-Marie Wilkinson has written the first part of what will be her regular DNA diary and John Tanner provides mystery pictures from the SDFHS Photographs Project from Dorset for readers to try to identify. In the next edition he will provide pictures from Somerset and will alternate the two counties thereafter.

Regular features include ‘Dorset Spotlight’, this time on Martinstown, ‘Book Reviews’, ‘What the Papers Said’ and ‘Letters to the Editor’.

December’s issue will also have a theme. This time members will be invited to send in stories and pictures of their most memorable Eureka moment in researching their family tree.