‘The Ridouts of Sherborne’ – writing up your family history

SDFHS member, Karen Francis, describes how she started investigating her Ridout ancestors and encourages other family historians to publish their research so that it can be preserved. 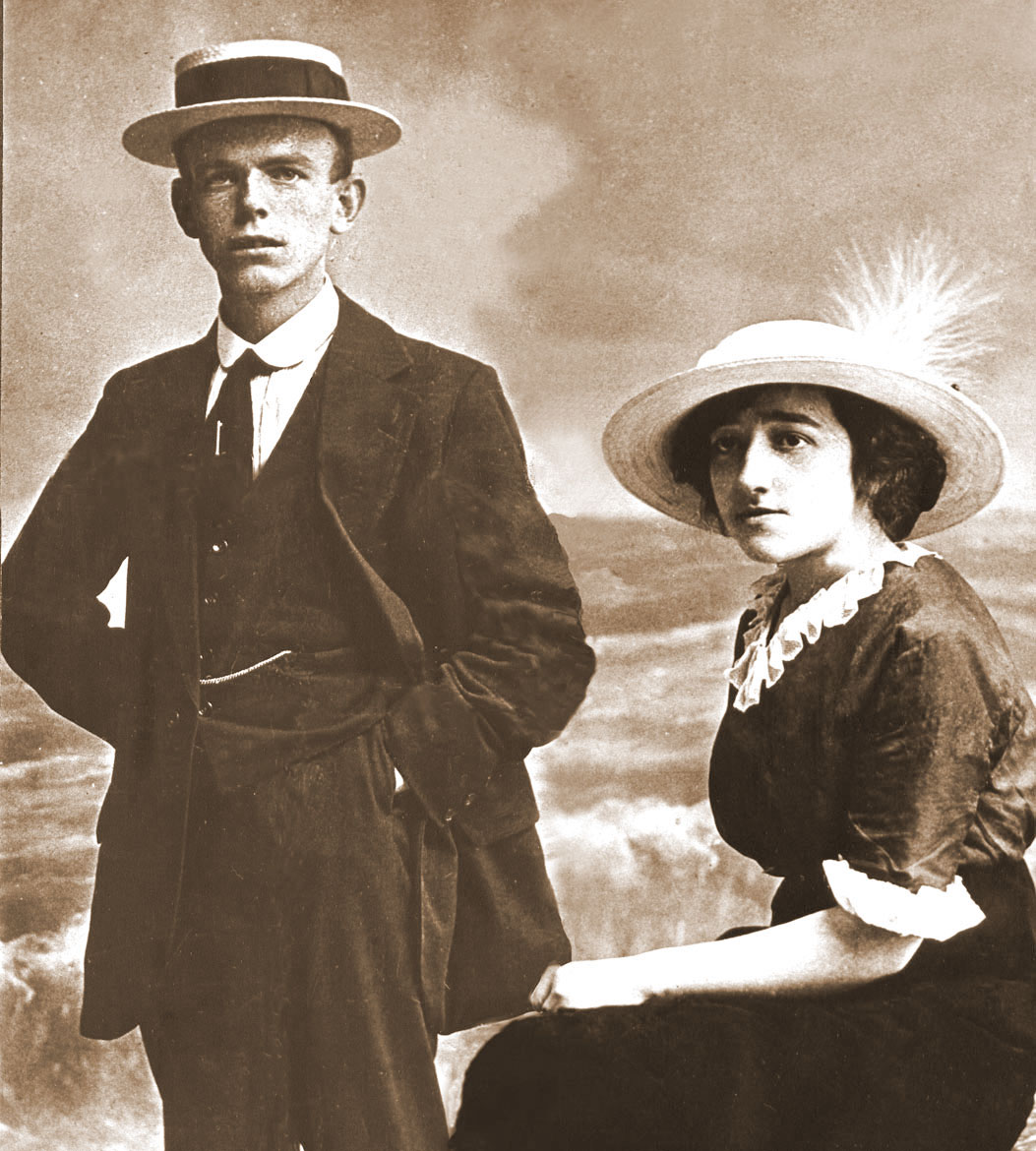 In March 2004, I decided to find out a bit about my maternal grandparents, Reg and Elsie Ridout. I started off with what I knew: Reg had run a fish and chip shop at 38a Kingsmead Street in Bath; Elsie smelt of lavender and baked gorgeous chocolate cake. Not exactly a lot to go on, but what do children ever really know about their grandparents? Well, my mother knew her grandfather’s name, which was John Arthur Ridout, and that he died in 1953, the year my two year old self met him. I dimly remember a tall man, wearing brown tweeds, folded awkwardly into an armchair like a stick insect; he offered me a Cadbury’s chocolate biscuit, which my pudgy little fingers grasped no doubt.

Having subscribed to Ancestry, I found John Arthur in the 1901 census and impatiently leapfrogged backwards until I found his father Edwin and then followed him back to 1851… to my first Ooh Ahh moment … finding that Edwin’s father was then still alive! My x3 great grandfather was John, born ~1785 in Sherborne. I was a bit shaken because I’d assumed that my mum’s family had been in Bath forever; the discovery that they came from Dorset was quite radical. When you have found three generations of your family in almost as many minutes you should probably spend a moment or two taking stock or making a plan, but I didn’t. I was oblivious to grandfathers and great grandfathers and, for a couple of years, concentrated solely on John before branching out to lesser mortals. John has always my first love though; strange the way we can be entranced by a total stranger.

I’m not a linear thinker, more of a ‘gut instinct coupled with logic’ sort of person, not surprising perhaps for an ex police officer. I did attempt to adopt the magnificent Elizabeth Shown Mills’ stringent rules of evidence at one point, but impatience inevitably led to failure. I daresay I could be criticised for paying too much heed to my random neuronal firings back then but, when all is said and done, family history is just my hobby – who tells a philatelist which way up to stick stamps in their album? However, a few years ago, after amassing quite a collection of facts and figures it occurred to me that perhaps I shouldn’t just keep my discoveries to myself – what if I was run over by that anecdotal bus? Who would know what I’d discovered? I was forced to introduce a little method to my madness; I re-traced my steps, entered my data into a good genealogical software program and started an online blog and a one-name yDNA study. I became a model family historian: I bought box files, acid-free photo storage and even polished my desk occasionally but, a year or so ago my brain was again troubled – suppose the internet imploded, where would my decade’s worth of research actually go? Considering the fragility of cyberspace caused me to fall back on a tried and tested method of data preservation – paper; I decided to write a book.

In the old days aspiring authors had to find a publisher willing to take a gamble on their literary gems, but now there are ‘print-on-demand’ services so you can be your own publisher. The distribution company simply prints and posts your work to anyone who wants to buy the book and there is no expense to you, unless buy a copy for yourself, of course. My biggest concern about writing a book was that I thought it would have to be erudite, grammatically faultless and referenced to pieces. This is undoubtedly true if you aim to write an authoritative text, but not if you’re writing your own story. In a nutshell, your readers can take or leave what you say; it is your story to tell and so tell it in whatever way you like. For my book, I simply reproduced an embellished version of the blog, with additional chapters and data, sprinkled with illustrations. 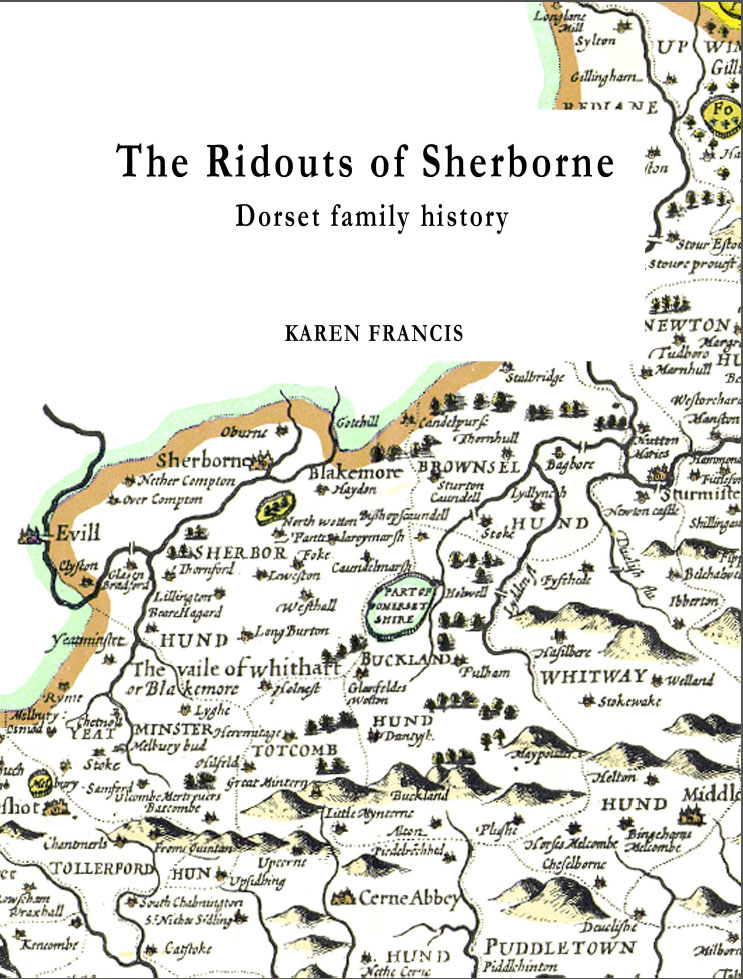 ‘The Ridouts of Sherborne’ can be purchased at; http://www.lulu.com/shop/karen-francis/the-ridouts-of-sherborne/paperback/product-22036868.html

When I started writing the blog I hadn’t really considered that anyone would read it, although I secretly hoped that they would, of course. Happily, since its inception, the site has received more than 23,000 hits and currently has 144 followers; I’ve received comments and contacts from all over the world and some of these have been hitherto unknown, distant members of my family. Unfortunately, I haven’t sold enough copies of the printed form to put me in the running for the Mann Booker Prize just yet but my reward has been in holding in my hand something that I’ve created. My cousins have all bought copies too, for themselves and their offspring. So, if you’ve ever given any thought to what will happen to your research after you’re gone, take my tip, write it down, put it in print, get an ISBN and send a copy to the British Library – your family history will be preserved for ever. Unless the Library burns down….!