Barbara Elsmore is researching the Deacon family of basketmakers  and here describes how enlisting the help of other SDFHS members helped her to track down a missing son. On Saturday 16 May Barbara will be talking in Sherborne about basketmaking as an occupation in the first of our occasional series of events What did your Ancestors Do? The other speaker will be John Damon on ‘Families in the Utilities’: full details.

I have just read Patricia Spencer’s excellent article in the latest Greenwood Tree on ‘Helping Each Other With Research’ and I would like to add some of my recent experiences of helping others which has also benefited me.

I became very interested in basketmaking and began to trace a little of the life and times of a local basketmaking family (see Barbara’s earlier post). With the help of volunteers at the SDFHS Family History Centre in Sherborne, and beyond, I discovered that Joseph Deacon, basketmaker of Sherborne, had three sons (Thomas, John and Joseph) who    followed in their father’s footsteps and also became basketmakers. The eldest, Thomas, who more than sixty years ago made the little shopping basket for me which had sparked off my interest, moved to Nether Compton around 1910 where he worked with his son, Joe, and later his grandson, Tom. The youngest of the three brothers, Joseph, continued to work with his father in Sherborne, eventually handing on the business to his son Ray, but I did not know what became of Joseph Deacon’s middle son, John, until he suddenly came to light with the help of an SDFHS member who knew of my interest. An old postcard of a pub (my contact has an interest in old pubs) had appeared for sale on eBay but it was what was on the back of the postcard which gave me my first clue as to where John Deacon might be found. 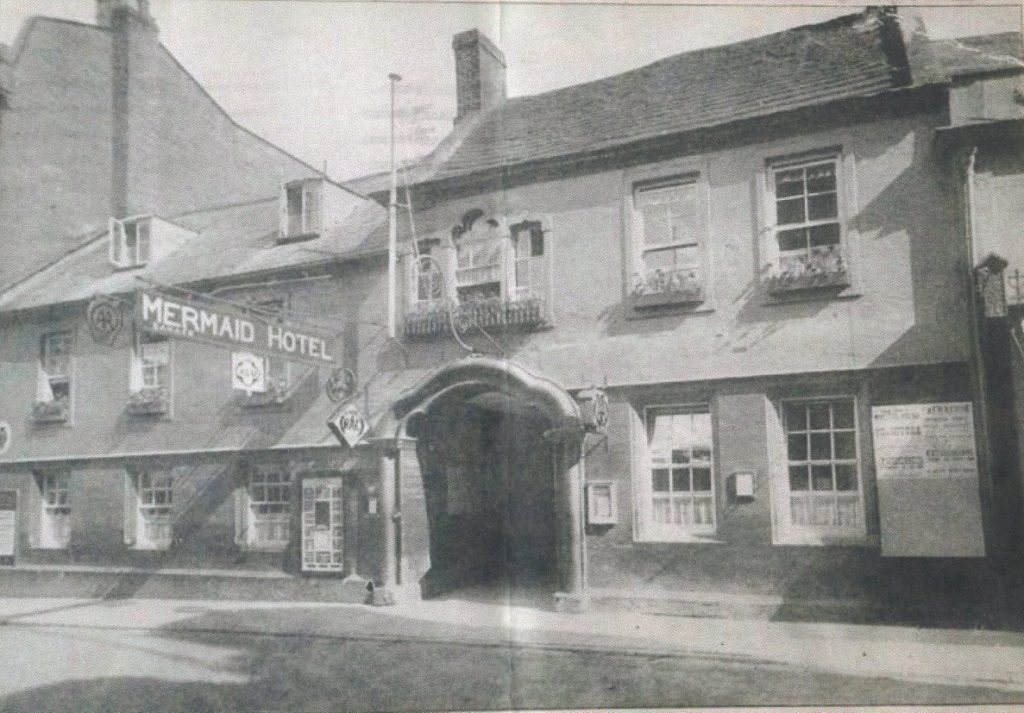 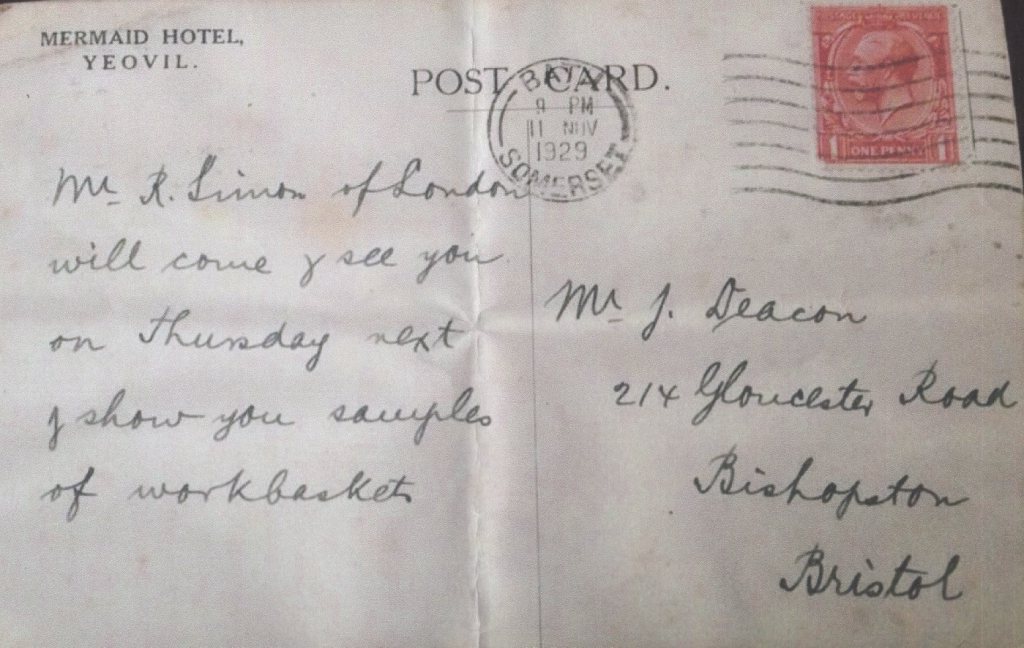 This was a thrilling moment for me as here was the first piece of evidence that John Deacon also ran his own basketmaking business. The postcard, sent to him in 1929 at 214 Gloucester Road, Bishopston, Bristol, mentioned samples of workbaskets being shown to him. Immediately I contacted my cousin, who lives in Bristol, and is a long-term member of the Society. Not for nothing is she known by her local group as ‘Miss Marple’ because she was hotfoot back with an actual photograph of John Deacon’s basketmaking shop at 214 Gloucester Road, which she had found via http://thegloucesterroadstory.org – This was a significant discovery as it had been posted on the site by a Joan Yeandle. 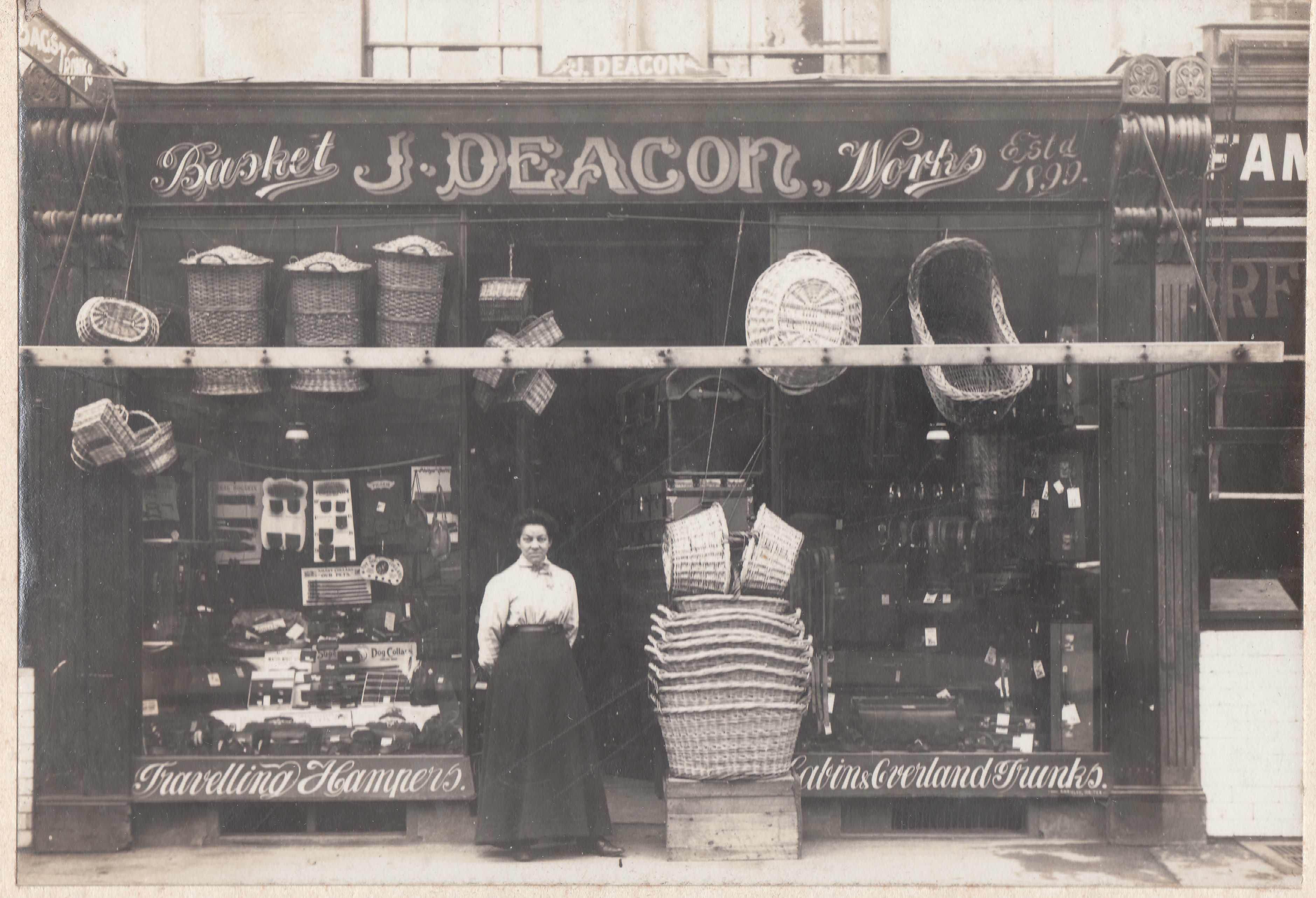 I was able to get in touch with Joan and she came to visit me in Sherborne and brought me many old family photographs that had originally belonged to John Deacon and were passed to his only child, Kitty. Kitty married but did not have any children and sadly there was no-one who wanted the old photos. Luckily Joan, the daughter of one of Kitty’s lifelong friends, now has the photos and has loaned them to me to take copies in order to share them with current members of the other branches of the family as these links to the past deserve to be reunited with those who will treasure them. One of the photos in the batch is of a cottage and it is very faded. 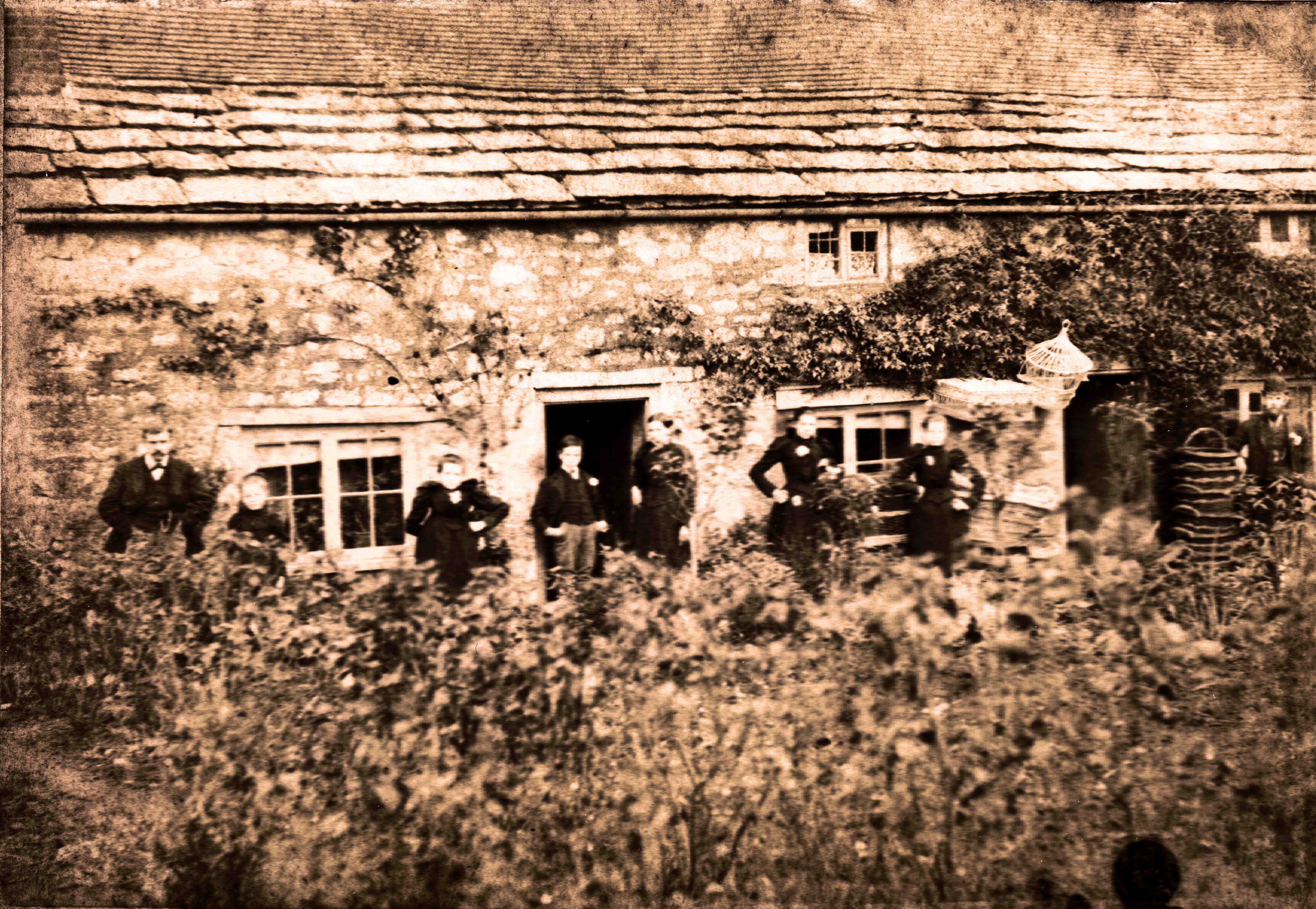 I have done what I can with it to bring it back but I really need more help here as you can see. It shows a long cottage, or maybe two, with someone standing over to the right surrounded by baskets. Joan thought that this might be in Nether Compton and we wandered around the village on a beautiful spring day but could not find a suitable candidate. I have pored over the Deacon family tree and I wonder if this could be taken around 1890 before Thomas married. Perhaps that is Thomas on the right, John on the left with Joseph in the middle and with five of the eight sisters. Thomas did not move to Nether Compton until about 1910 as far as we can tell. Perhaps the cottage is in Bradford Abbas or Longburton? – two other villages where the family lived.

I would not have been this far on with my search for information without my many contacts at the Somerset and Dorset Family History Society and I have so enjoyed their support, encouragement and enthusiasm. I strongly believe that we have all to gain and nothing to lose by increasing our methods, outlined by Patricia, in increasing the opportunities to establish these links.