Who Do Who Do You Think You Are?LIVE

The SDFHS Chair, Ann-Marie Wilkinson, has been keeping a diary during this year’s WDYTYA.

Car nicely packed, just need to pop into the local butchers in Wedmore to pick up some local meat to give to my hosts, Barry and Ann Rideout, who look after me for the next few days.  As usual the butcher has local meat, this time it is Gloucester Old Spot pork and some of his home made sausages.  The journey was fairly uneventful, although the traffic was bad around Stonehenge – the new Visitor Centre is quite a way from the stones and now that they have closed the old road, there is a long queue of traffic to get off the dual carriageway at Amesbury.  Still, had a break at Fleet services and arrived in Teddington at about 6:30. 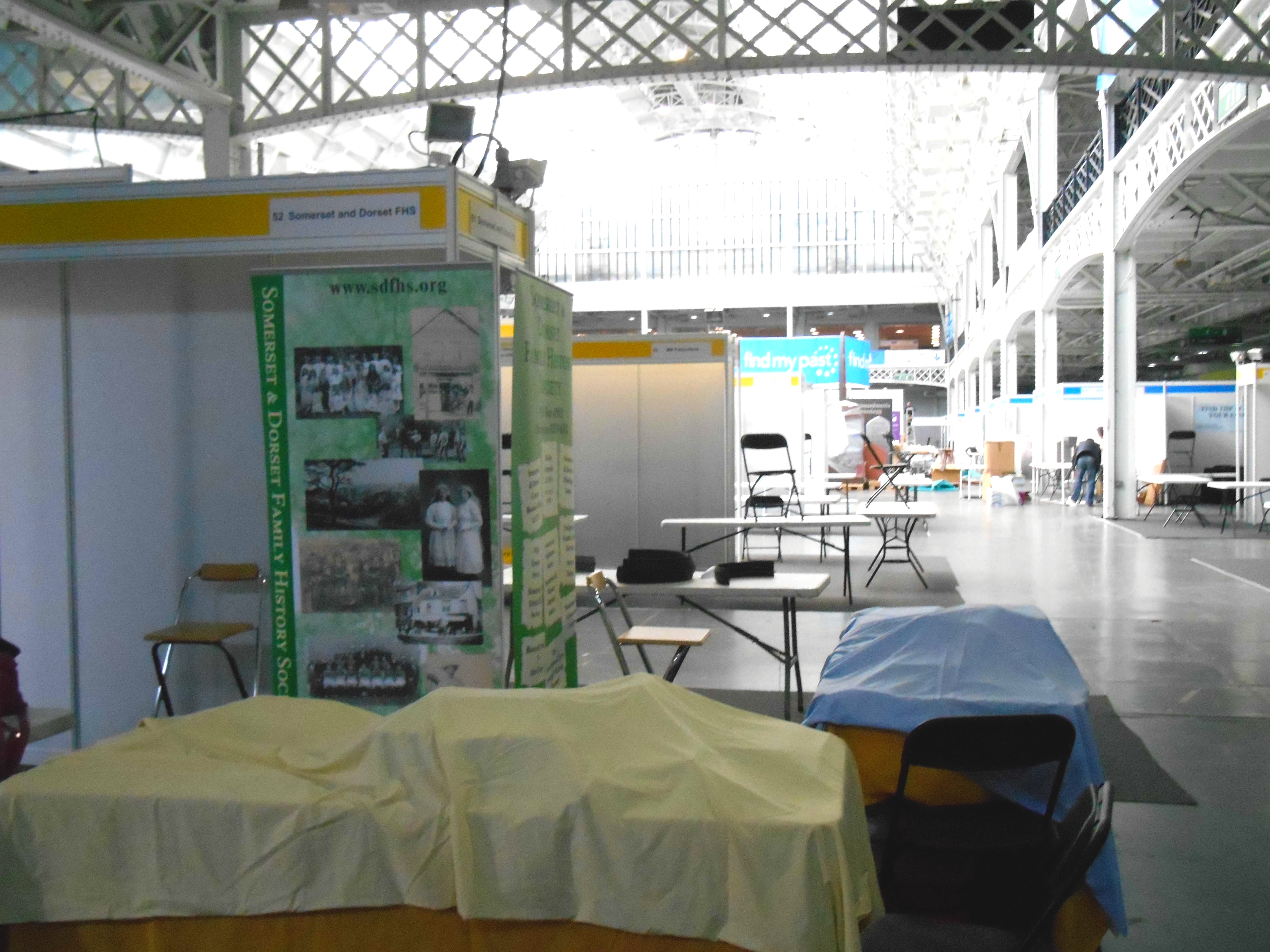 Our tables all set up and covered over ready for the opening of the event on Thursday.

This year we had to book a time slot to go and unload the items for the stand.  That was another tale in itself as the instructions were not clear and every time I got a step further in the process, I needed another bit of information and had to go and find it.  Anyway I eventually booked a slot for 10:30 and we left in plenty of time – only to run into traffic because of an accident!  We arrived later than expected, but no problem.  We parked just outside the door and it was only a few steps to our stand (52 and 61 in the SOG area).  There were very few people there setting up and we managed to sort it all out in about an hour.  Back home and to the pub for lunch, then lazy afternoon reading to charge the batteries before tomorrow.

The train got more and more crowded on the way to Clapham Junction, then on to Olympia.  Jeremy, Jane and Rose were there when we arrived.  I set up the two computers that we can use to access our indexes and do lookups for people.  We have had a steady flow of people during the day.  Plenty of people want to know about the floods.  It seems that the rest of the country thinks that the entire county of Somerset is under water!  I brought an illustration from The Lost Islands of Somerset by Richard Brunning to illustrate the extent of the flooding.  I had someone asking me whether they could get to Glastonbury from Shepton Mallet or did they have to go the ‘long way round’?  I’m not sure how they were proposing to get to Glastonbury any other way as the highest route was the one they were talking about.

Plenty of people around the show and we all had a chance to look around and spend some money! 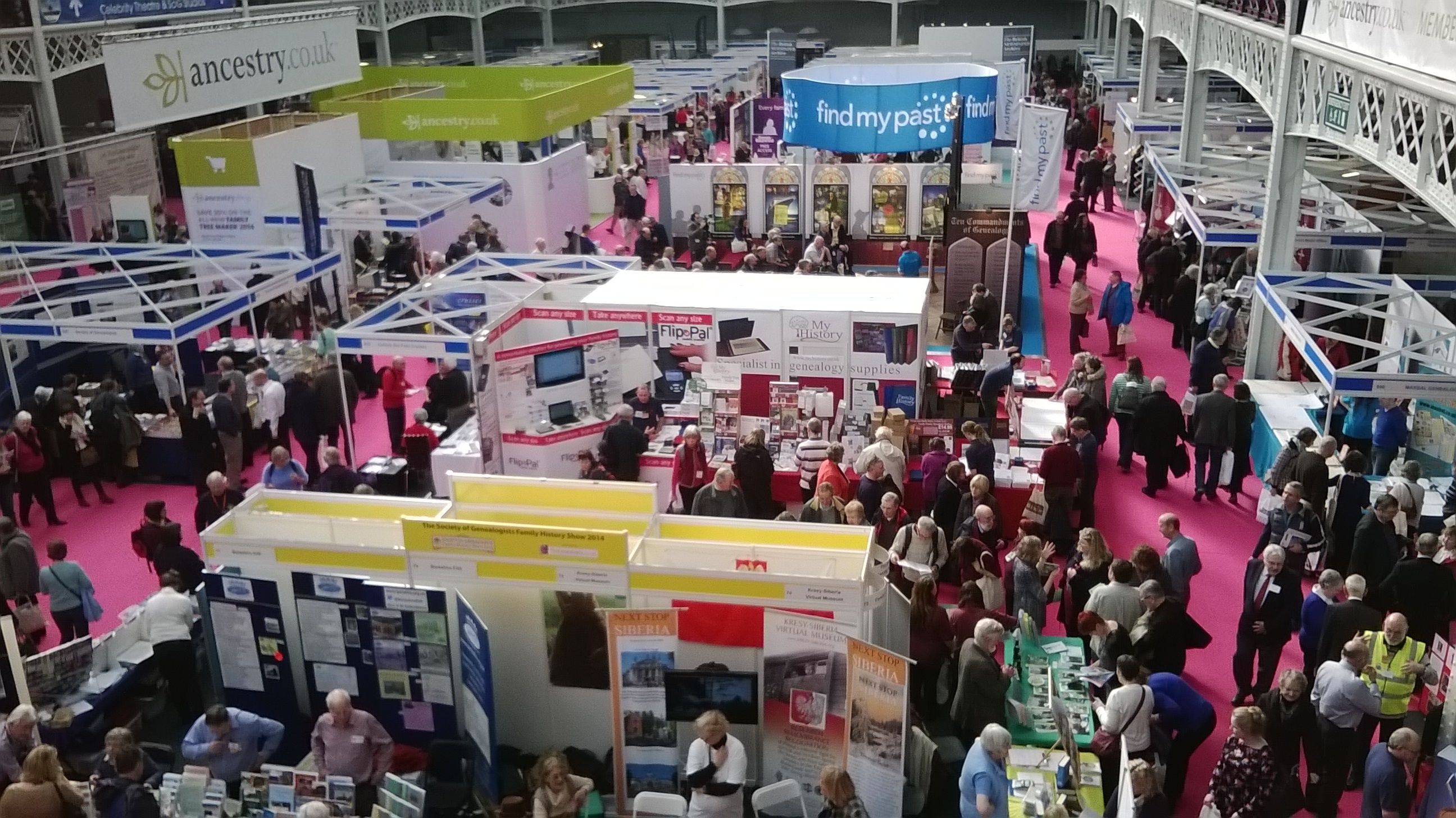 View down towards the SDFHS tables (the green covered one at the right end of the SoG area) and the one round the corner (out of view).

This evening Findmypast hosted their usual dinner and five of us went along to represent the SDFHS – the invitations go to those societies and individuals who contribute data to the website.  We had a very pleasant evening and the food was good as was the company.  We shared a table with people from the Anglo-German Family History Society and the editor of My Family Tree magazine.

Bit of a panic this morning as Barry’s central heating boiler had stopped working.  I was lucky – he got the cold shower!  He stayed at home for the plumber while I took the train to Olympia.  Halfway there I remember that Barry had chained the Laptop cases to the table for security and I did not have the key!  Luckily I managed to work out a way to get the laptops out, but it was not easy so I suppose that the security worked.

We are having another full day with our volunteers kept busy helping people.   We had one lady who had a burial record from West Lulworth which stated that the person’s cause of death was ‘hanged himself.  Luckily the British Newspaper Archive is here so we suggested that she saw them and looked at what was in the newspaper.  She came back some time later saying that they had found the record and it looked like the reason he’d committed suicide was that he had lost his job.  It is always nice when you hear that someone has made progress and you have been able to help in some small way. It has been great chatting to SDFHS members who have called at our tables, and nice to involve ‘out of county members’ in our activities.

It is now 4:30 and the number of visitors has lessened so I have a chance to write this.  I’m sure that we will be busy again tomorrow.